"If anyone, then, asks me the meaning of our flag, I say to him -- it means just what Concord and Lexington meant; what Bunker Hill meant; which was, in short, the rising up of a valiant young people against an old tyranny to establish the most momentous doctrine that the world had ever known -- the right of men to their own selves and to their liberties." -Henry Ward Beecher

Yes, folks, on Monday it was Flag Day here in the United States. Like many flags, there's no shortage of stars on this one. 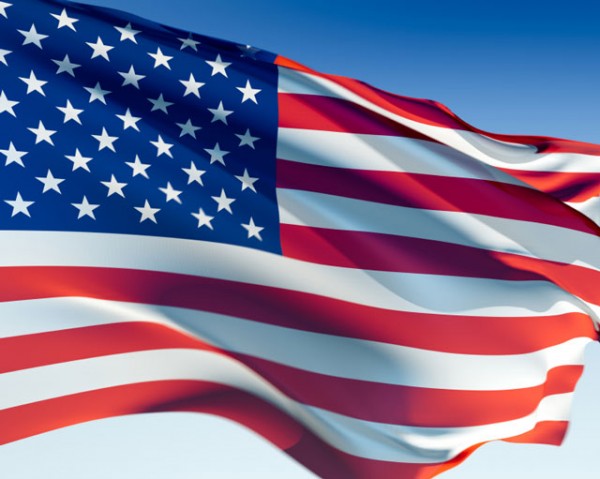 But these stars are merely symbolic, and not actually representative of stars in the night sky.

But there are some flags that go the extra mile for astronomical accuracy and utility. 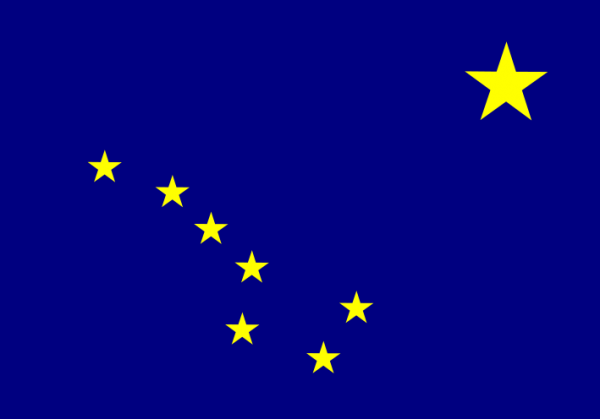 The state of Alaska, inspired by the Irish Starry Plough, chose the constellation of the Big Dipper along with Polaris -- the North Star -- for their flag.

The Big Dipper (known elsewhere as a plough, a chariot, a coffin, a bear, or a cart) is one of the most recognizable constellations for anyone in the Northern Hemisphere. This is both due to the brightness of its seven stars (visible even in large metropolitan cities), but also because of its usefulness. 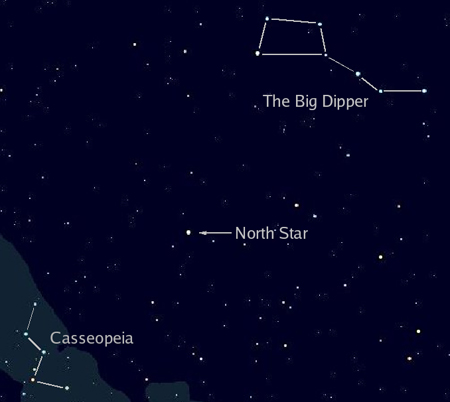 The two stars at the edge of the "cup" of the dipper (as opposed to the handle) point towards the bright North Star, Polaris. Although the constellation isn't as bright as the Big Dipper, Polaris forms the tip of the handle of the Little Dipper. 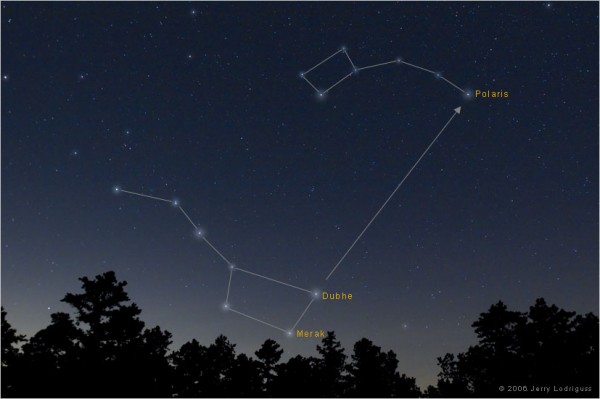 For the rest of your life, if you find yourself in the Northern Hemisphere on a clear night, following the Big Dipper to the North Star will be a surefire way for you to find north.

But what if you live in the Southern Hemisphere? Well, although it's slightly more involved, there are a number of flags to help guide you. Here are some.

From left-to-right (and click for a larger view), the Cocos (Keeling) Islands, Christmas Island, Tierra Del Fuego in Argentina, and the Australian Socceroos all show the same set of five stars: the Southern Cross. 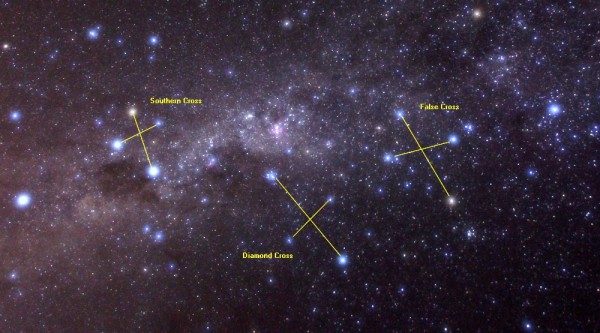 I'm just joking around, Australia. I know what the real Australian Flag looks like.

This cross-like (or kite-like) configuration of four stars actually appears in two different places, so you need to look for the dimmer fifth star -- Epsilon Crucis -- to distinguish the Southern Cross from the others, especially the tricky False Cross.

But if you correctly identify the Southern Cross, you are well on your way to finding south in the night sky. 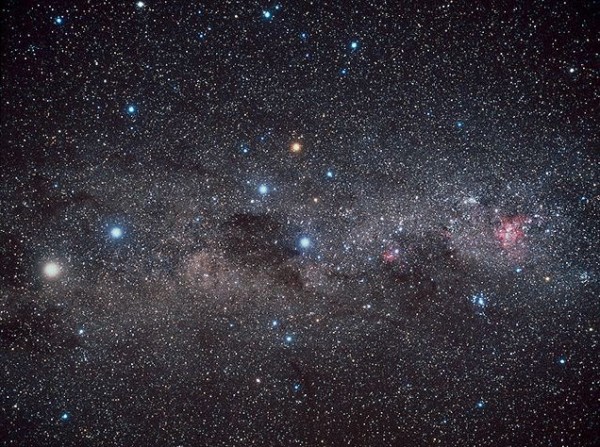 Unlike in the Northern Hemisphere, there is no bright star marking the pole in the Southern Hemisphere. (I heard you, Sigma Octantis, and you're too dim to count!) So you need to be a little clever to find south. 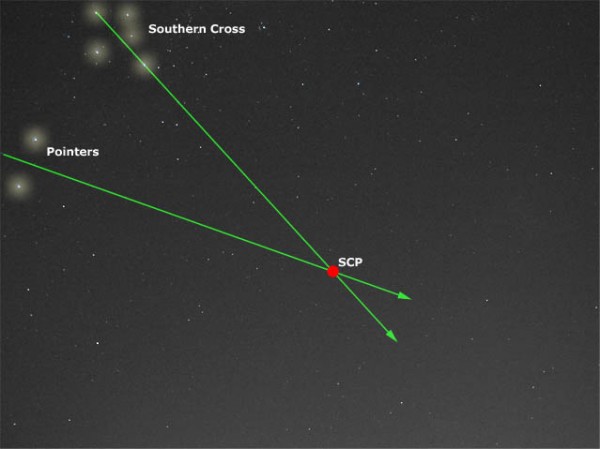 Where these two imaginary lines meet is the location of the South Celestial Pole, and that's how you find south!

Two different stories from two different hemispheres, as told through flags! And while that's pretty neat, I can't let this post end without showing off the flag of Brazil. In my opinion, it's the most astronomical of all the flags. 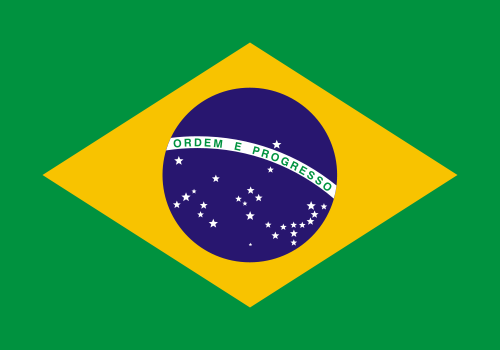 With 27 stars to represent their 26 states and 1 federal district, Brazil's flag accurately depicts the locations and magnitudes of 27 major stars (most of which compose recognizable constellations) in the Southern Hemisphere. Unlike many other countries with stars representing states on their flag, each star represents a specific state or district. The flag depicts the sky over Rio de Janeiro on the morning of November 15, 1889, the day the Republic of Brazil was declared.

So happy belated Flag Day to all. Whether your home country/state/territory has stars or not on its flag, the astronomical skies are all yours!

Is the Southern Cross mirrored on the Brazilian flag?

Your posts always deliver. Thank you! My kids love your posts as well (what they can follow). This one is the sort that they go nuts over.

Great stuff as ever.

I hadn't known that about the Brazilian flag. That is cool.

I am staying away from the New Zealand flag controversies. Personally, I don't like depictions of the Southern Cross without the fifth star in it, as it makes it too easy to confuse it with either the False Cross or the Diamond Cross.

The Brazilian flag depicts stars as viewed from "outside" the celestial sphere. This means that all the constellations shown are "mirrored" as we see them in the night sky.

I have that saucepan.

That's fantastic that I can make this accessible and interesting to such a wide audience! Thanks.

Oi, what about New Zealand? I didn't choose that callsign for nothing!

Hi, I really like your blog! Possibly the best in scienceblogs.

I'm from Argentina, but I've never heard of your rule to find the southern pole. What we commonly use here is this:
1) We find the Southern Cross. For that, we can try to see the fifth star as you sead, or we just use Alpha and Beta Centauri (they are the "Pointers" after all!), which is much easier in a big city.
2) We extend the long axis of the cross three and a half times. For that, you can use your fingers (with your arm extended), or just your imagination.

I believe this is much easier than drawing a perpendicular line to Alpha and Beta Centauri, because they are quite close together.

Being British born with Irish parents, I've long wondered if the Australian flag is actually a visual Irish pun. The British think their flag dominates, but in truth the ancient Irish Silver star on a deep blue field does, albeit with a different constellation. Tiocfaidh Ar La! ( Irish for our day will come.)