And so I'm where, exactly?

What would you do if you woke up one day, and found yourself in completely unfamiliar surroundings? You don't know what day it is, what year it is, or even where you are.

Is there any way, without any other information, that you could figure out exactly where in the world you were? 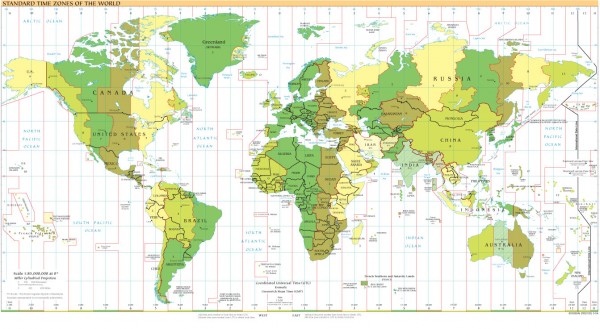 We typically describe our location on Earth by two coordinates: a latitude and a longitude. Latitude, your distance (either North or South) from the equator, in degrees, is actually very easy to figure out, assuming you know your astronomy and have some basic measuring tools.

All you have to do is find either the North (or South) Celestial pole, depending on what hemisphere you're in.

Even though the Earth orbits the Sun, traveling a distance of 940 million kilometers a year, all while orbiting on its axis, the North Celestial Pole and South Celestial Pole always appear in the exact same position from any given latitude on Earth.

Look up at the night sky -- on a good, clear night -- and if you're in the Southern Hemisphere, you should be able to see the following. 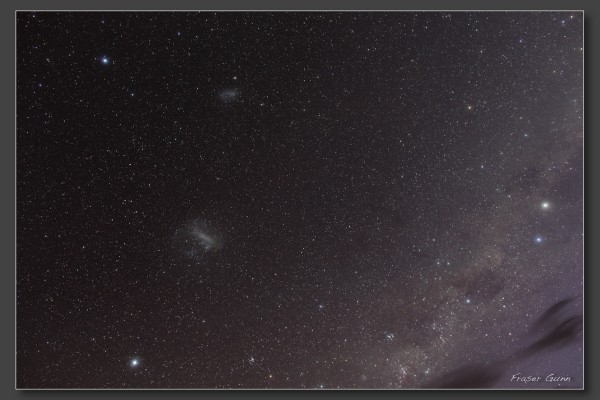 Along the band of the Milky Way, there's the (true) Southern Cross, which you can tell apart from the false cross by the fifth star in the "left hip" position, as well as the two very bright pointer stars, Alpha and Beta Centauri. Off the band of the Milky Way are two faint but prominent clouds, the Large and Small Magellanic Clouds, small satellite galaxies over a hundred thousand light years away.

And if you can find these objects in the sky, you should have no problem finding the location of the South Celestial Pole. Here's how. 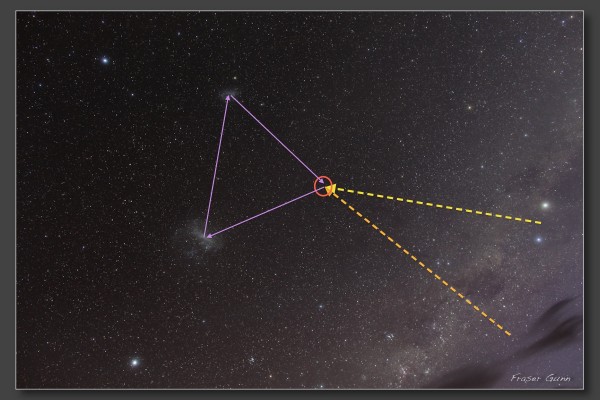 Image still by Fraser Gunn, additions by me.

Draw an imaginary line down the long axis of the cross, and also draw one perpendicular to the two pointer stars. Where those lines intersect is (approximately) the location of the South Celestial Pole.

Want to do a little better? The location of the Pole also makes an equilateral triangle with the two Magellanic Clouds; between these two methods, you should easily be able to locate the South Celestial Pole to less than one degree.

Of course, if you're in the Northern Hemisphere, things are even easier. 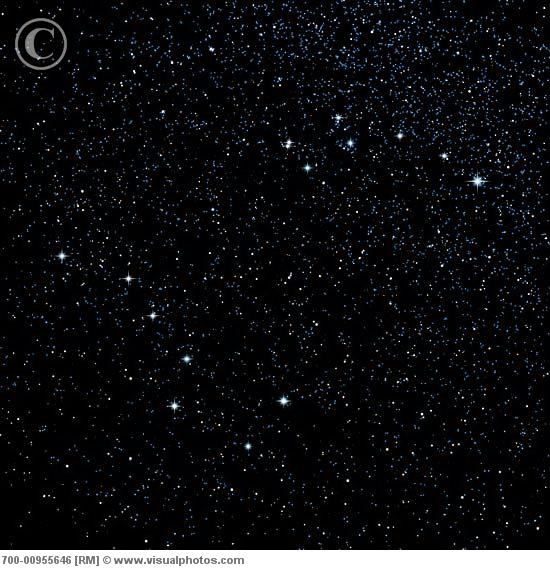 Because in the Northern Hemisphere, we're fortunate enough to have a bright, prominent Pole Star! Simply follow the last two stars in the Big Dipper's "cup" up to the North Star, and you simply can't miss it.

As the video below shows, the night sky will appear to rotate around the Pole Star, with a period of just under 24 hours, no matter what your location on Earth is.

So that takes care of latitude. But longitude is a very big problem. Unlike latitude, where different locations actually lead to significant differences in observable phenomena, longitude is arbitrary.

So if you want to measure your longitude, you need some sort of prior knowledge. The easiest way to do it is to identify some place as zero degrees longitude, use what you know about astronomy to calculate when the Sun rises and sets at different latitudes, and then carry a timepiece with you.

And the easiest way to keep accurate time, as Christiaan Huygens discovered in the 17th Century, is with a pendulum clock. At any given location on Earth, an ideal pendulum -- that is, a heavy mass connected to a fixed point by a massless string -- has its period determined solely by two things: the acceleration due to gravity and the length of that pendulum.

Once this was understood, it became relatively straightforward to construct a seconds pendulum, or a pendulum where every swing, from one side to the other, took a time of (practically) exactly one second.

If you have a clock with you, and you know your latitude, and you also know when any astronomical body (i.e., the Sun) should be rising or setting, you can figure out your longitude with no problem at all!

Except, there are two problems with that. The first is that, as you move to different latitudes and elevations on Earth, the acceleration due to gravity changes!

The Earth bulges at the equator and is compressed at the poles due to its rotation, making the acceleration due to gravity slightly larger at higher latitudes and slightly lower closer to the equator. Additionally, higher elevations mean you're farther from the center of the Earth, and so gravity will be slightly higher at sea level and slightly lower at high altitudes. 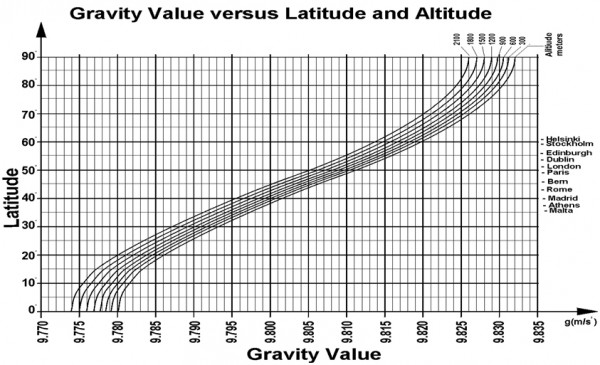 This has been measured incredibly precisely by today's standards, but this effect has been known (and accounted for) since the 1670s, by Jean Richer. Anyone traveling -- and in possession of this knowledge -- could lengthen or shorten their seconds pendulum slightly, dependent on their latitude and altitude, to keep the period constant. Once you know how to account for changes in gravity, you can calculate your longitude as you move without fear that those effects will throw you off.

But something else happens as you travel, something that is much harder to account for, and virtually impossible to control. 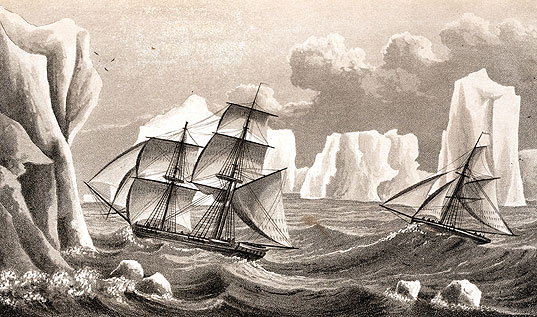 Temperature! As the temperature heats up or cools down, your pendulum will expand or contract; that's what virtually all materials do when you change their temperature!

But that would be terrible for your pendulum! If its length gets shorter, so does the period of one pendulum swing, and if the length gets longer, your swing time lengthens as well. If you don't know to take this into account, unlike the gravimetry problem, above, a plunge into below-freezing temperatures can throw your clocks off by a minute or two per day, where every missed minute means an error in longitude of up to 28 kilometers. (Depending on your latitude.) Since temperatures change all the time, and these errors are cumulative, using a simple pendulum clock could, over the course of a few months, lead to errors in your calculated longitude of thousands of kilometers. All because, as the mesmerizing video below shows, pendulums of different lengths have different periods.

So how, then, could you avoid this problem? How can you overcome the perils of your material expanding/contracting in changing temperatures? How do you keep the length of your pendulum constant?

The answer, discovered not by Newton or Galileo but by the virtual unknown commoner, John Harrison, was simultaneously simple and brilliant. Here's the concept applied to a pendulum. 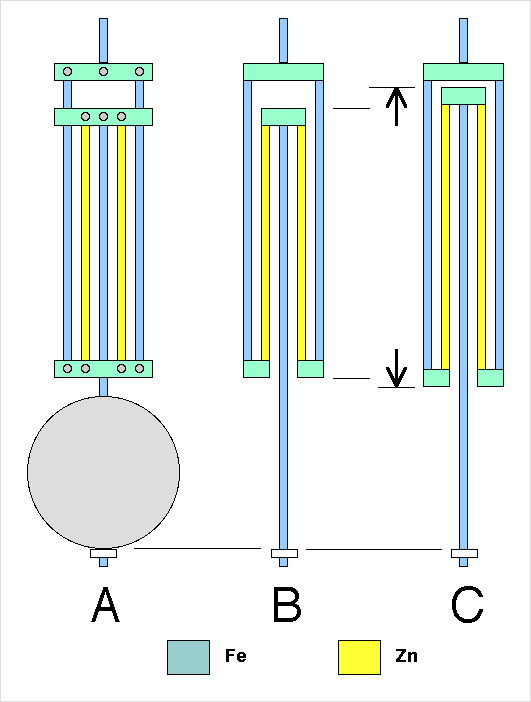 What's going to happen? As the temperature drops, the iron and zinc both contract; the zinc contracts three times as much, but the total iron is three times as long! Since the zinc provides a negative distance but the iron a positive one, they -- in effect -- cancel each other out! If the temperature rises instead, the iron and zinc both expand, with the iron making the pendulum longer and the zinc making it shorter by amounts that, once again, cancel each other out! In other words, the temperature can change to anything it wants, and the overall length of the pendulum will stay the same, insensitive to temperature! 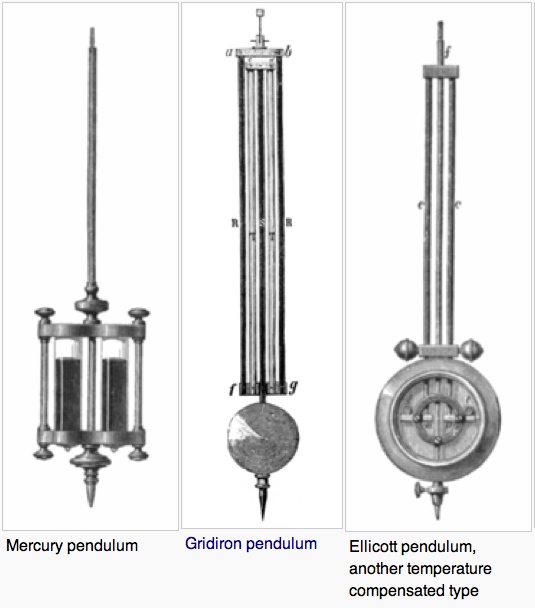 Image credit: lifted from the Wikipedia page on pendula.

For marine use, you'd have to apply this same concept to the chronometer, as pendula are impractical. For those of you interested in learning a much richer account of this story, I actually have a book to recommend! 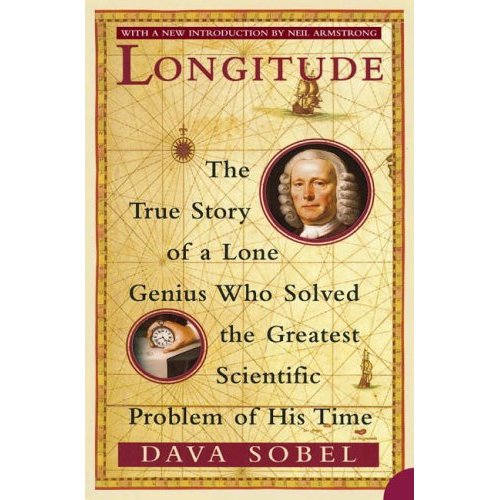 It's called Longitude, by Dava Sobel, and it's a fun, brisk, quick-paced read for anyone who hasn't gotten their hands on it yet.

So now you know the ease with which you can find your latitudes anywhere, but longitude? That's some hard work, and it takes a reference point to mean anything! Still, how clever and simple is that temperature-compensation trick, to use different elements with different thermal expansion properties in combination, keeping the overall length constant! Thank the stars for heavy elements...

I can find latitude with my eyes closed.

Well, not literally, but without outside information. All I need is my trusty inertial measurement unit with its sensitive accelerometers and gyroscopes. Let it sit still for a few minutes, then the gravity vector and the earth rotation vector will be precise enough that the angle between them will give latitude to reasonable precision.

The history of John Harrison's quest to build a navigational chronometer is a fascinating one. In the end, of course, he abandoned the gravity-driven pendulum and used the spring balance mechanism - also with a variety of ingenious and beautifully-crafted compensating mechanisms.

Question, though: You said that you need to adjust the length of your pendulum to account for latitude and altitude. How do you measure altitude? (Besides GPS, hehehe...)

I'm guessing you just use a map, where altitudes have already been determined using like surveying equipment or something?

just go to the nearest mall and find the map with the "You are Here" arrow.

You can measure altitude to reasonable accuracy with a barometer. Also, surveying equipment. Believe it or not, the world existed before GPS.

I think GPS corrected the altitude of Everest by 26ft compared to the 1856 measurement. Not too shabby.

With "other information" being allowed, I'd just ask the guy standing next to me what day it was, the year, and where I was.

great post! but i think when contracting the zinc will make the pendulum longer and vice versa

Have to say I struggled through that book Longitude, the writer's 'style' didn't do the story justice at all.

Luckily, I am the kind of man not afraid to ask for directions.