"We want our sound to go into the soul of the audience, and see if it can awaken some little thing in their minds... 'Cause there are so many sleeping people."
-Jimi Hendrix

One of the greatest challenges in music is to take a great original song and cover it, adding your own twist or flavor, and produce something that's even better. Most of you have heard the Four Tops' song It's the Same Old Song, which has its own interesting story.

It's The Same Old Song
But this past week, I discovered a cover of it by Iron & Wine, which kind of, well, awakened something inside of me listening to it.
The Same Old Song
And it occurred to me that in astronomy, we have our own covers, of sorts, thanks to two telescopes from space, Hubble (left) and Chandra (right).

Hubble is great for looking at nearby objects in the Universe in visible light, while Chandra looks in X-ray light. Separately, they each give us beautiful, informative images.

For example, here's Hubble's view deep inside the Eagle Nebula, looking at a feature that's now known as the Pillars of Creation. (Although, interestingly enough, a nearby supernova may have already destroyed them.) 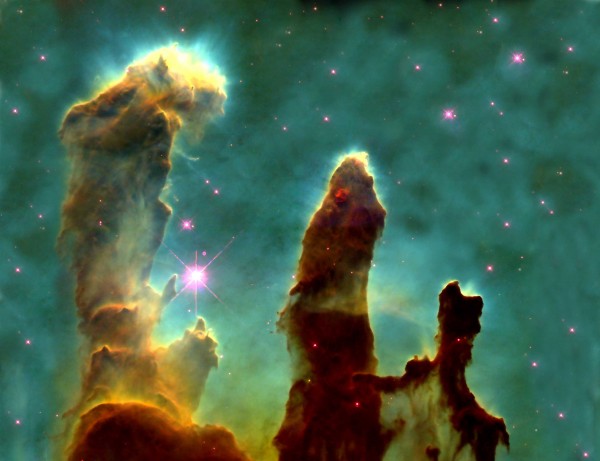 In a galaxy, when large regions of gas start to collapse, they form new stars! But it's very difficult to see these new stars, because the light is blocked by, well, the large amounts of gas surrounding these new stars!

At least, the visible light is.

But young, big, hot stars also emit X-ray light. And that's the sort of thing that Chandra eats for breakfast. 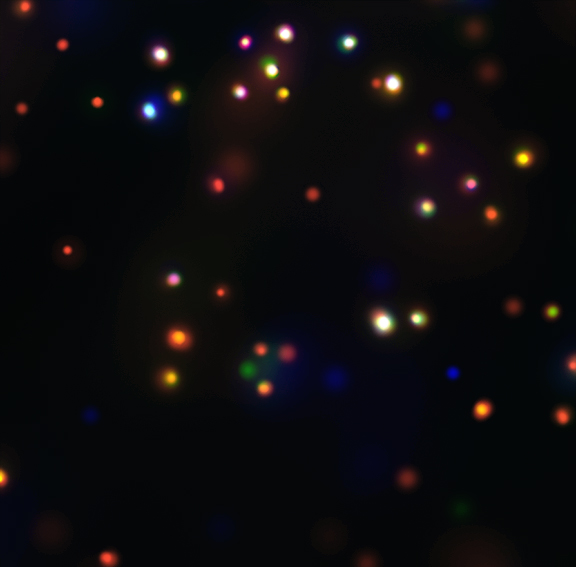 Lo and behold, there are a bunch of hot, young stars in this region. This means that these pillars are signposts that new stars form here.

But this is about covers, so what happens when we overlay these images atop one another? 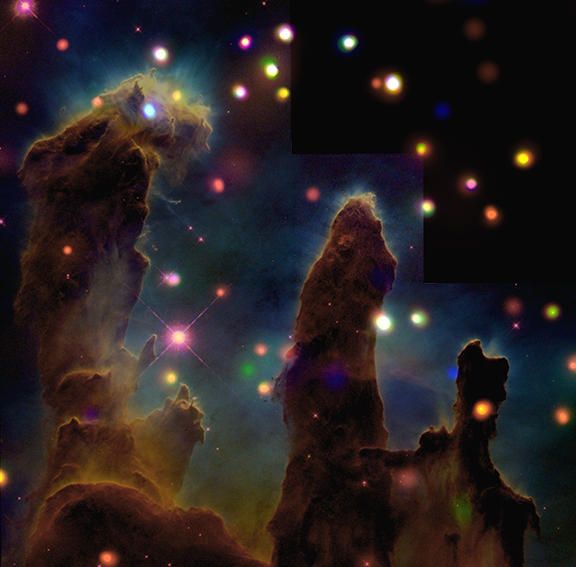 We learn that most of the stars have already formed, and have done so outside of the pillars! Not something we would have necessarily expected, but something that we learned from the original visible image and the X-ray cover, together!

So have a great weekend, and I'll see you all next week!

Hmmmm, formed outside the pillars of gas or were ejected (from the nest) due to violent relaxation?

Or perhaps a new phenomena where the blast from a small supernova is enough to nudge the pillars of gas away from newly formed stars, or maybe the pillars once moving can't hold onto the newly formed...Hmmmmm.

Gotta say much more pleasing to the ears than the orig. tho I suppose the orig. has a time and a place.

covers? here's a good one.
http://www.youtube.com/watch?v=YcOY-C76mbU

Cool post. I must say I always enjoy when you explain two images individually, and then overlay them to illustrate your points further. For me some of the theoretical ideas of cosmology and astronomy can come across as wildly imaginitive almost beyond the realm of reality; this is due to the inability to comprehend whats really happening by attempting to visualize whats being said in my own poorly functioning brain. Receiving new infomation combined with tangible photographic evidence is a rare and welcome gift (at least for me) Well done Ethan. Keep em coming!

Hi all;
A fatal flaw was that they failed to have any representative posts ready to go up when the blog went live.

Had they done so, and had the content been surprisingly acceptable, the reception might have been better.

Instead we get this "Hi! Welcome to ShillBlog!" (crickets) and everyone, quite reasonably, expects the worst.

So I just read the link that Ethan posted regarding the supernova that exploded destorying the pillars of creation; however i found a major contradicion within the text.

In paragraph two they tell us: "Astronomers speculate that the supernova's shock wave could have already reached the dusty towers, causing them to topple about 6,000 years ago. However, because light from this region takes 7,000 years to reach Earth, we won't be able to capture photos of the destruction for another 1,000 years or so."

Yet in the 5th paragraph they state: "...one of these stellar time bombs has in fact already detonated, an event humans most likely witnessed 1,000 to 2,000 years ago as an unusually bright star in the sky."

Not sure what the correct way to cite this is, so i just copied the hyper link below.

Does that make sense to you?

If we are receiving/seeing information of the supernova AND the "pillars of creation" POC at the same instant and it was stated that we would receive/see the destruction in 1000 years, then this means that the distance between the two should be within 100 light years (at a velocity of up to 30,000 km/s -wiki)and depending upon the type and the energy expended (I lack this info)would dictate the results upon the POC.

Any star created in the area (Eagle nebula radius 15LY)should have a common composition with the POC and given that the POC are so tightly held and well defined, I would suspect that the supernova would be a catalyst for more star creation within the POC, but I guess it really depends on the distance/energy/density relationship.
If the Eagle Nebula is the remnants of a supernova itself then any star generated within the Nebula that may have migrated apprx. 100 lys within 5.5million yrs achieving supernova should only consist of a portion of the original energy.
(right?)
The overlay of the graphics is not enough data to convince me that star formation occured outside the POC...there must be more.

Just how energetic is this supernova?

Are the pillars form created by such supernova?

Could dark matter play a part in the tightly held arms of the approx. 5.5 million year old Eagle Nebula?

@Bjoern
It does make sense and your 1st rebuttle was my initial thought. I knew there were alternate possibilities beyond that that could satisfy the statement, but I was unable to think them through. I even sat down with pen and paper trying to draw different explinations beyond the apparently obvious one. Thats what I find so intersting about this stuff is you can always try to find new interpretations of the information.

Hi, I am a total novice to astronomy. Can anyone explain or link me to an article which explain why the Eagle Nebula is shaped the way it is? It seems rather odd to me.

Astronomy is a huge interest to me. Ever since I was a child I have thought about the space and everything in it. Nowdays I'm just thrilled to sit down and watch a sci fiction documentary or basically anything related to the future and the space.

It's a funny thing that when you think of it, you really are not much to universe at all. Those pillars are probably way bigger than the whole solar systemt that our tiny planet orbs in.

At least our future kind will be able to see what happend to those pillars :)

In my next life I'll retrain and get my head around this.
Amazingly fascination.

i believe in two reasons for their disappearance
1. pillars of creation...... creating stars when the stars are formed they engulf the surrounding dust n hydrogen gas and formed into dense structures
2.it is very difficult to focus the same location bcz universe is expanding....;);)