Gimme An M! How the Higgs Gives you Mass.

"I suppose I'll open a bottle of something if they find it." -Peter Higgs

Alright, all you quarks and leptons in the house. I'm looking at you in particular, up quark, down quark, and the electron. The up and down quarks combine to make up the proton and neutron, while the electron combines with nuclei to make up atoms. 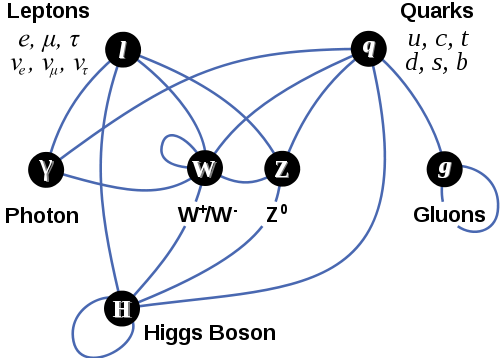 This includes all the quarks (including the constituents of the proton and neutron) and leptons (including the electron). And one of the unavoidable questions I got was, "How?"

This is a good question, and a hard one to explain, but I think I have a good analogy, and it's all about energy. 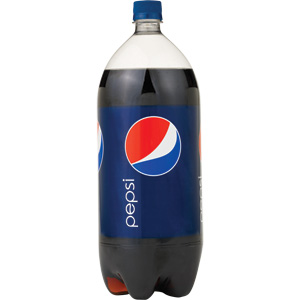 The initial liquid level represents the energy in your Universe. Imagine the Higgs field is like a molecule of oil that you drop into this 2-liter bottle. Where would you expect to find it? Well, if the bottle's already this got a lot of liquid in it, your oil's going to float on top. 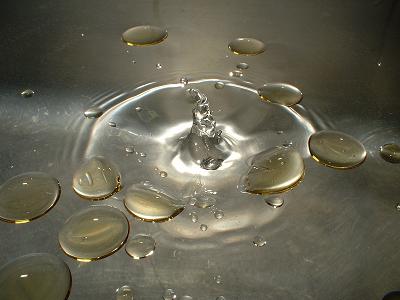 So you know your oil drop's going to be on the surface. But where is your drop going to wind up? Will it be towards the side of the bottle? In the middle? Somewhere in between?

But what if I drain the bottle? 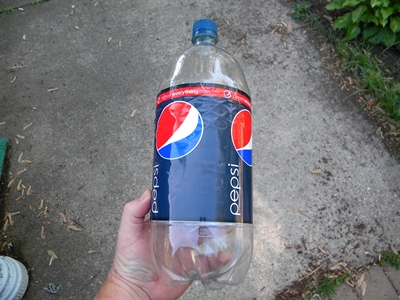 This is what happens at lower energies. Well, now when I drop my oil droplet in, it will never land in the center. It will always roll down into one of the five wells at the bottom. The fact that all locations are now not equally likely makes us call this a broken symmetry, and the expectation value at these low energies is now not zero. 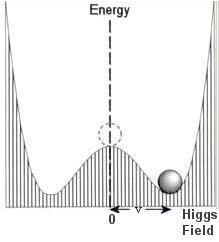 This whole process is called spontaneous symmetry breaking. And for the quarks and leptons in the standard model, when this Higgs symmetry is broken, every particle gets a mass due to two things:

And this is kind of the problem. The expectation value of the Higgs field is the same for all of these particles, and not too difficult to determine. But that coupling constant? Not only is it different for every particle, but -- in the standard model -- it's arbitrary.

In other words, we can determine what they are by measuring the masses of these particles, but the standard model gives us no way to predict them.

And part of the horror of the standard model is that it gives us the origin of the masses of the fundamental particles, and the interactions that give us protons, neutrons, electrons, atoms, planets, stars, and galaxies! But it doesn't give us the fundamental masses without us measuring them.

This means when the Universe was at a higher energy, though, all the fundamental particles were massless. Could we re-create an environment like that at the LHC? Stay tuned...

Are there anti-bosons? If so, would they have collided with bosons? What effect would that have? Since they are massless, I assume that there would be no energy released?

"How the Higgs Gives You Mass"

Bonus points for using a Pepsi bottle as your analogy.
Starts With A Bang, now with extra Snark!

So when symmetry is broken the wells in nature (versus soda bottle) are of different sizes (i.e. different coupling constants).

OK or what am I misunderstanding?

I have to agree with the other posts as far as understanding these last two posts about the Higgs. I have a hard time understanding the Higgs and what it is and what role it plays. I've read this twice so far but I guess I don't have a firm enough grasp on the basics to understand this stuff.

Wow, simple, easily explained and "fun" to read. Thanks so much!

I fail to see how substituting a plastic Pepsi bottle with five slots helps to clarify matters.

THE HIGH PRICE OF REVOLUTION
youtube.com/user/xviolatex?feature=mhum

@Jim Ernst: Well, the answers to your questions depend on the specific type of boson... there are these possibilities:

* photons, gluons and Z bosons: are their own antiparticles (i. e. they are particle and antiparticle at the same time); photons and Z bosons can't collide directly with each other (because they have no electric / weak charge), but indirectly (via the exchange of virtual fermions), and the result is a new pair of photons (or Z-bosons); gluons can collide directly with each other (because they have color charge), and the result is either one or two new gluons; in both cases, I wouldn't say that energy is "released", merely transformed

* W bosons: there is a W+ and a W- boson; they are antiparticles to each other, and they can annihilate each other to yield a photon or a Z boson, so in that case, I think one could say that energy is released

* Higgs bosons: as far as I know, these are also their own antiparticles, so probably the same as for photons etc. above holds; but I'm not sure about that

Oh, and that photons and gluons have no rest mass is irrelevant for the energy in the collision. (Higgs, Z and W bosons have a rest mass anyway)

Okay, so the non-zero expectation value of the Higgs field, plus the coupling constants give particles mass. But how?

Ethan, the notion of zero mass at high energies seems to conflict with that part of the big bang theory that calls for the very early emergence of gravity (10^-43 seconds, at 10^42 Kelvin). We can't have gravity without mass, can we?

Ethan@14
Gravity, in a general relativistic framework, applies to all distributions of matter/energy. The mass that the Higg's symmetry breaking generates is the rest mass of the standard model particles. A non-zero rest mass means that they no longer propagate (i.e. travel) at the speed of light. But at high energies where the effect of the Higgs is negligible, the rest mass remains zero and everything behaves in a light-like fashion, still subject to gravity since they still have energy, just like everyday photons.

Following Bjoern @12: all particles, regardless of being a boson or fermion, have an antiparticle. Except that some particles are their own antiparticle, which means the first sentence is kind of a bad way to put it. Really, there is a symmetry in the laws of physics which says you can make a certain transformation of your fields and the physics remains the same. Under this symmetry masses and spins don't change but the charges under the strong,weak,and electromagnetic forces change sign, so for example, an electron with EM charge -1 switches to a positron with charge +1 and vice versa. But a photon, which has zero charge, just transforms into itself, so we say it is its own anti-particle.

The simplest, Standard Model higgs, would show up as a new neutral particle spin-0 boson (a scalar) which happens to be it's own antiparticle. (Neutral particles are not neccessarily their own antiparticle in general.) It would have some mass we can see at a detector. However, the details of the Higgs symmetry breaking/mass-generating mechanism, involve the fact that the Higgs, before symmetry breaking, is thought of as a collection of fields/particles called a doublet. One part of this doublet becomes the neutral, physical Higgs we want to see at a detector. The other part is in fact charged so before symmetry breaking we would say there is an h+ and an h-, in addition to the h0 which is what we normally refer to as 'the' Higgs, and another neutral component. After symmetry breaking, the h+ and h- become part of the now-massive W+/W- bosons which carry the weak force. The aforementioned other neutral component of the Higgs doublet becomes part of the Z boson.

Whoops, the first paragraph above is directed to Frank Burdge and not Ethan, who probably knows it better than I.

The one from 10 is more than a troll, he really needs help (literally, I'm not being figurative).