As I prepare to write this, it occurs to me that some of you may not have seen the greatest* movie of all time, Happy Gilmore. The movie begins with a montage of Happy's disastrous and violent childhood, where he -- a wannabe hockey player -- is raised by his very sweet grandma (played by Frances Bay, RIP one year today) while the you're treated to the Lynyrd Skynyrd classic,

Happy has an amazingly powerful slap shot, which isn't quite enough to land him with a minor league hockey team, but -- combined with an unorthodox running start -- is enough to make him the longest-driving golfer in the world. 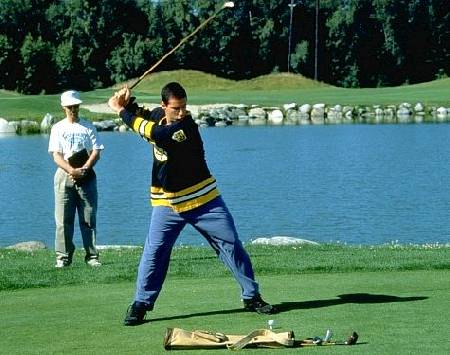 Now, I was intrigued by this, because not only is such a swing actually legal in professional golf (although not so much if you're drunk in Nova Scotia), but according to the laws of physics, it should actually make the ball go significantly farther! 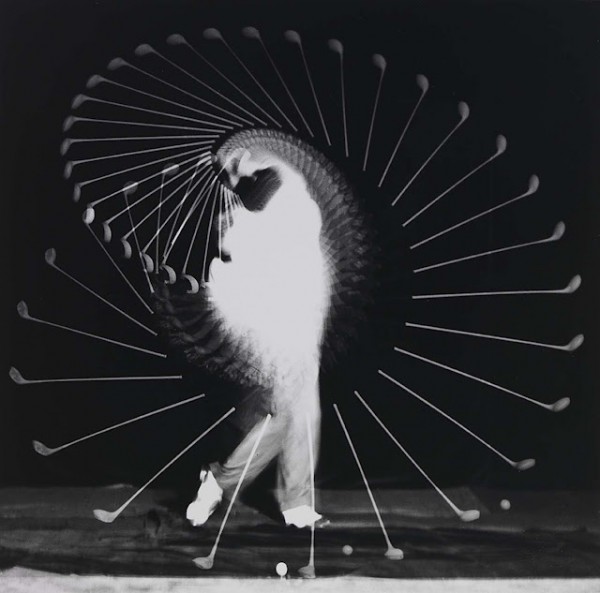 When you collide an object like a swung golf club with a stationary golf ball, there are really only three things that are going to impact how fast the ball comes off of the club head. 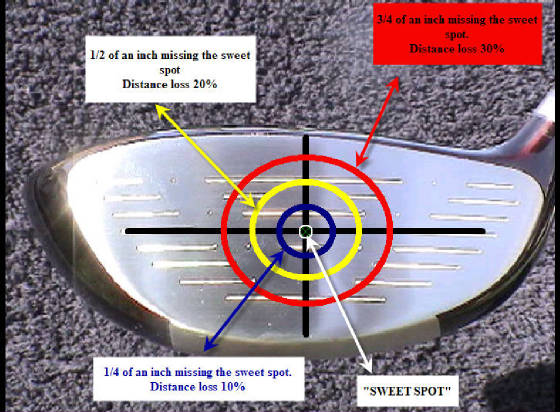 The second is also unsurprising: it's hitting the ball in the "sweet spot" of the club head. The reason for this is pretty straightforward: you want to transfer as much energy from the club to the ball as possible. If you strike the ball away from the sweet spot (or more technically, the center of percussion), you're going to create oscillatory vibrations in the club, which you'll be able to feel in your hands. (If you've ever felt pain in your hands after swinging a baseball bat and making lousy contact, this is the same effect.) That's energy that's being transferred up the shaft of the club instead of into the ball, and that's going to hurt your ball's distance.

So swing the club head as fast as possible, aim for the sweet spot, and use the heaviest club head possible. 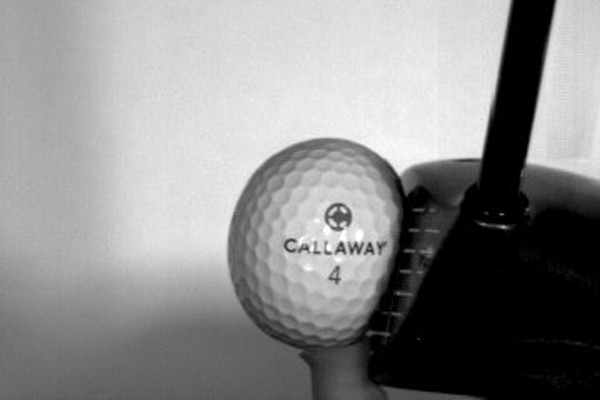 There's usually a trade-off between the speed of the club head and the mass of a club head; there's a limit to how fast we can swing a heavy weight positioned at the end of a long rod. But the heavier and faster we can go, the more we're going to deform the golf ball, and the faster the ball's going to leave the club head. 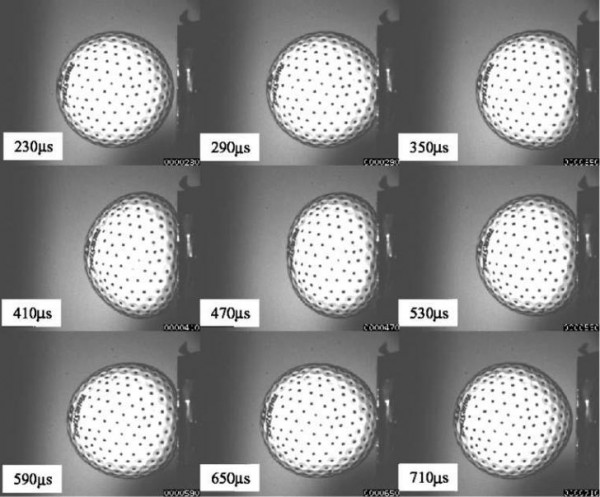 Here's a collision (above) between a 45-gram golf ball and a 200-gram club head moving at 136 miles-per-hour relative to one another. That's some intense deformation of the golf ball!

But it's not nearly as spectacular as this (alleged) 150 mile-per-hour collision between a 45-gram golf ball and a 50 pound steel plate!

But I wouldn't be surprised if this was faster than 150 mph.

What's the big difference? In addition to speed, the 50-pound steel plate means you have something of virtually infinite mass (in comparison to the ball) colliding with it, as opposed to something that only outweighs it (the club head) by a factor of 3 or 4.

In a perfectly elastic collision, striking a small mass object with a much larger massed object causes the small one to move off at twice the initial speed.

Image credit: John D. Norton of the University of Pittsburgh.

A club head is only about four times the mass of the ball, and although both ball and club technology have improved, they're still not (and never will be) perfectly elastic. If you can swing a club head at 100 miles-per-hour, you can get the golf ball moving, realistically, at about 150 miles-per-hour. (If the collision were ideally elastic, you might be able to get up to about 180 miles-per-hour.)

So, according to physics, if you can use a running start to get an extra few miles-per-hour (let's say 5 miles-per-hour) onto your club head speed, that should translate to an extra 8 miles-per-hour for the initial speed of your ball. What does that mean for distance?

Again, according to realistic physics, we're talking maybe an extra 10% longer off the tee, which isn't too shabby!

When I first realized this, I figured that -- based on how hard it is to actually hit a golf ball decently at all -- taking a running start was simply too hard. You'd miss the sweet spot or the ball entirely, and so this was out of the question. But then it was pointed out to me that some golfers can, in fact, do some amazing things with a golf ball.

So maybe this was reasonable after all! After all, if it isn't against the rules, and it could add an extra 10% to your drive, who wouldn't want to be an extra 30 yards closer to the hole?

According to simple physics, it should be true that a running start plus a perfect swing should get you closer to the hole than simply a stationary swing.

That middle photo is another by Doc Edgerton, of golf legend Bobby Jones.

So what happens when you take one of the top players in the world and have them drive the ball using the Happy Gilmore-style swing? Can they still hit the sweet spot of the ball? See for yourself, courtesy of Sport Science. (Skip to 3:13 to watch the action if you're impatient.)

It really is a thing of beauty, and it's always amazing when the theory agrees so well with the experimental results! I don't golf, but if I did, there's no way I wouldn't try for the Happy Gilmore advantage. I would love to see someone give it a shot under tournament conditions, because it really does make a difference. Just make sure you get plenty of practice and wear cleats, because no one wants to wind up looking like this guy!

Hope you enjoyed the physics of Happy Gilmore, and here's wishing you a great weekend!

* -- I was 17 years old when Happy Gilmore was released, and I continue to love this movie to this very day. It is by no stretch of the imagination a fine film, but it strikes that rare, golden balance between absurdity, immature humor, and heart. If you've had the good fortune to spend lots of time with me during my late teens or 20s, you were probably forced to watch it with me at some point. My insincerest apologies to you if that was the case, because that movie is awesome, you jackass!

"My insincerest apologies to you if that was the case, because that movie is awesome, you jackass!"

That's a cool clip you linked to, and replace 'Jackass' with 'Moron' and what you got is a perfect visualization of 'Wow' hanging around on this forum.

What I love about golf is the ball and how the 'dimples' in it, along with the generated backspin, make it go faster and reduce drag when moving through the air, or making it look as if there was a less denser medium to travel through, it's all about rotation, profile and Fluid Dynamics ; )

Oh fuck off you troll.

Well done, particularly if you don't play golf. Padraig is one of the few players on the planet who can carry this off. If I tried it, I might well whiff. It was interesting to learn that an error of 1 degree can result in 20 yards offline shot. Amazing that any human can reproducibly do this even standing still.

Another topic that is interesting to physicists (and me) is the physics of the ball rolling on the green. At least in concept, more tamable than studying the full swing. The people behind AimPoint have developed the math, and you can see the result on TV, when they project the path of the ball on the screen before the putt. They have boiled this down into some working approximations and, for a fee, will teach them to you.
http://www.aimpointgolf.com

I'm a HS physics teacher, and one year my students gave me a copy of Happy Gilmore for Christmas, so I could also experience the movie they quoted ALL THE TIME. They also gave me a copy of another Adam Sandler movie that wasn't nearly as good. Thanks for this analysis!

this is great stuff Ethan, going to give this a try and the local driving range. one of my favorite movies as well!!

Pros don't do this, partly because some of them aren't athletic enough (Padraig trained for dancing when he was younger), but mostly because driving the ball as far as possible is not the goal of golf. Distance is only an advantage if it's combined with accuracy and proper positioning to minimize the number of strokes taken.

But h*ll yeah, it's way fun to try this a couple of times each year. Tape up your driver if you don't want skymarks!

Are you saying that the show Sport Science actually got something right? Some classics are the claims that Marshawn Lynch has a running power of 57000 watts and that you can predict Super Bowl winning quarterbacks based on facial dimensions.

"I was 17 years old when Happy Gilmore was released" - My daughter was about 12, she has watched it more than 50 times and knows it word for word.

Your "Trajectoware Drive" reminds me - the first electronic computer in the USA was developed as a result of the need to compute artillery trajectories.

hehehehe I missed this post when it went up last weekend! I literally just watched 'Happy Gilmore' tonight with my partners kids. They dont know anything about golf, but they loved it :-D

Great movie. But it turned a lot of golfers into numbskulls who think a giant swing translates into great distance. Without solid contact with the sweet spot on the club face, distance is not a reality. As far as the viral video of the golf ball compressing off of the steal plate at 150 mph, I do not believe it would recover, but rather split first.