"Twenty years from now you will be more disappointed by the things that you didn't do than by the ones you did do. So throw off the bowlines. Sail away from the safe harbor. Catch the trade winds in your sails. Explore. Dream. Discover." -Mark Twain

You've all heard of Kepler before, including the exoplanet-finding spacecraft named after the famed 17th Century astronomer. Johannes Kepler is probably most famous for his laws governing the motion of the planets, which cemented the heliocentric model -- and not the geocentric model -- as the best description for the motions of objects in our Solar System. 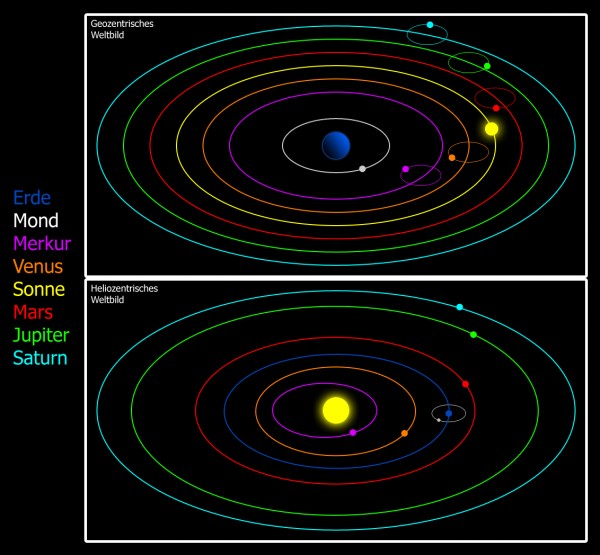 But Kepler -- born in 1571 -- had an even earlier fascination than the planets. When Kepler was only 6 years old, the Earth received a remarkable visitor.

The Great Comet of 1577 lit up the night sky, instantly fascinating watchers of the heavens. And Tycho Brahe -- Kepler's future employer and mentor -- scientifically and meticulously recorded his observations of it. 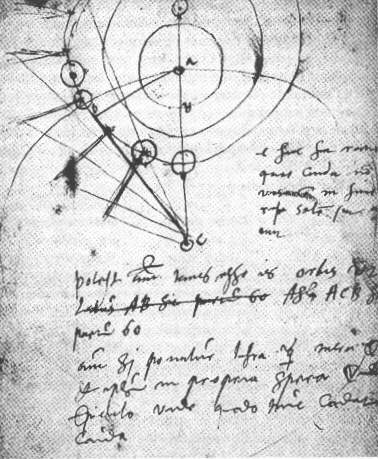 And as you yourself will notice -- despite Tycho placing the Earth at the center -- Tycho paid careful attention to the tail of this comet! Now Kepler not only had access to it, but comets are fairly plentiful, and Kepler got to observe many of his own. You can easily find some in your skies, too, if you're willing to wait. 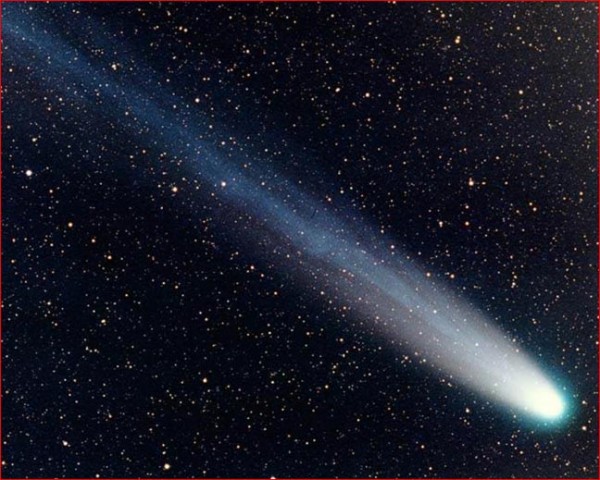 Here's a picture of Comet Hyakutake courtesy of NASA, and you can immediately notice its spectacular tail! Part of the tail looks white, while farther back, it looks blue. Do all comets look this way? 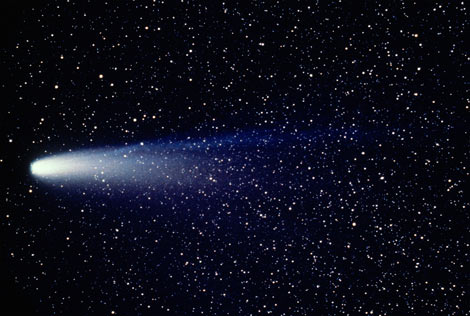 Well, Halley's Comet -- shown above from 1986 -- has a white part and a blue part, but they don't line up as well, do they? Let's look at an extreme example: 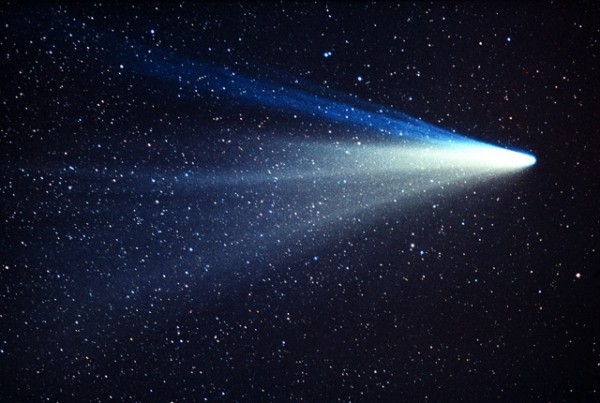 Comet West, imaged by John Laborde, clearly has a big separation between the white part and the blue part. What's going on here? There are two separate parts to every comet's tail: a gas part, which points directly away from the Sun, and a dust part, which curves as the comet moves through its orbit.

But, perhaps more significantly, you'll notice from the diagram above, as well as from Tycho's notebook drawings, the tail of the comet always points away from the Sun!

Kepler, realizing this, theorized that the Sun must be exerting some type of outward solar pressure, or some type of 'breeze'. 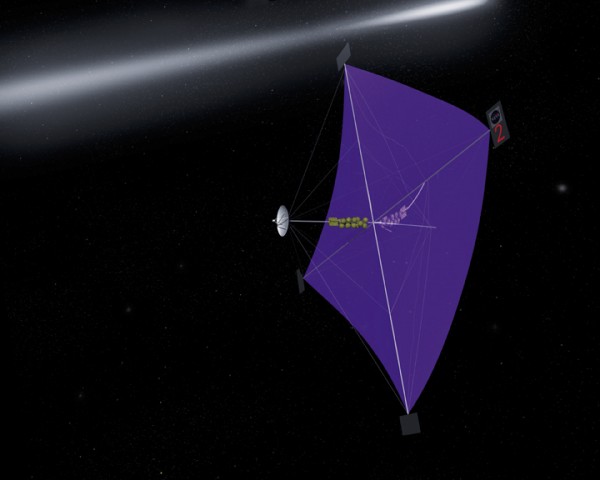 In fact, Kepler suggested that we could, someday, use this for travel through space, stating

...ships and sails proper for heavenly air should be fashioned. 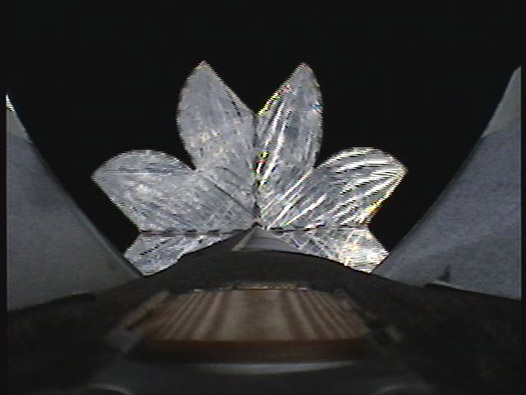 Come now to 2011, where prototypes have been built and tested (like Japan's clover-shaped sail above), and a new type of sail, NanoSail-D, has been completed. 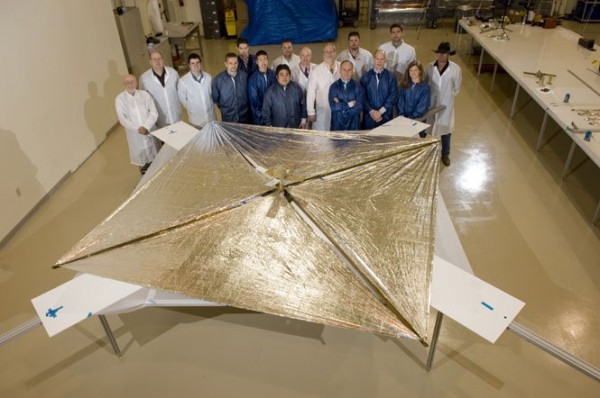 Well, it officially happened! NanoSail-D deployed, in orbit around Earth, on January 20th, and is successfully using light from the Sun to power it, controlling its flight by sailing, just as Kepler imagined! 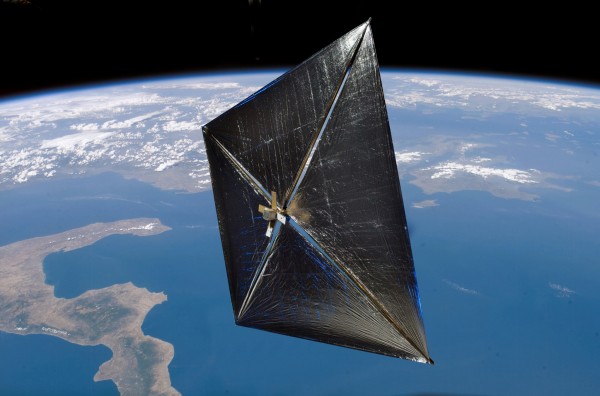 And for the next three months, it will sail around the Earth, being periodically visible through its -- what else -- reflected sunlight! There's currently a contest going on to photograph it, for those of you interested, before it re-enters Earth's atmosphere and burns up. But how amazing is this; 400 years later, and Kepler's original vision is coming true!

Ethan, I've always wondered how a solar-sail craft would maneuver; i.e. raise/lower it's orbit, perform intercepts, etc. Would it "tack"? What kind of "rigging" would it have? A future blog post?

I find the level of foresight humans, at (admittenly) rare times, are capable of utterly astonishing. :)

Ths is quickly becomming one of my favourite bloggs :D

Wish Kepler could have seen it.

According to this NASA page, they're using the sail as a kind of "solar drag," to slow and control an otherwise rapid, unpowered descent. The idea is that, in the future, satellites could unfurl solar sails at the end of their useful life. This would sweep up any orbital trash in their path and burn it up in the upper atmosphere. NanoSail-D will reenter the atmosphere later this spring. It will not make it home alive.

As far as solar sailing goes, you might want to ask the Japanese. JAXA used a solar sail to control a Venus flyby with their Ikaros probe.

Lovely, science fiction realised (wasn't there a tale called "Sunjammers" or is that a relic of my aged mind?).
But with reference to Kepler, I read a statement on one the Science blogs a few days ago that 20% of Americans believe in the geocentric theory! Now that is frightening.

Lovely, science fiction realised (wasn't there a tale called "Sunjammers" or is that a relic of my aged mind?).

Was a bit surprised at the orbiting, and then at the japanese who are flying in to Venus, while I thought the whole idea was to speed away from the sun with a sail. Will be interesting to understand all this in a year or two

@MarkV2
Yes, a solar sail can "tack" and maneuver in any direction. In order to go towards the Sun, the solar sail just needs to angle the reflected light in the direction of its travel (the tangent to its orbit), so it produces force to oppose its motion and decelerate it. This deceleration causes it to fall Sunwards under gravity, tightening its orbit.

@ Joffe,
Solar sailcraft are most efficient where the sunlight is more intense. So it makes sense to fly them to the inner solar system - like solar panels, their effectiveness drops off massively the farther away you get from the Sun.

Clam -- a further comment on that 20% suggests that it's pretty unreliable. Apparently the question was so badly designed that those 20% were probably just confused.

(OT) Laser guide stars: "Lasers create five new 'stars' in night sky"
http://www.newscientist.com/gallery/laser-guide-star
The term "star" may confuse laymen. It is essentially a line of air that has been ionized by a laser, but seen from the telescope (the point of origin for the brief laser burst) it looks like a luminous point, a "star". By automatically following the "star" as it scintillates (the result of turbulence in the air), a computer can follow the shifting optical refraction of the air millisecond by millisecond, and compensate for it by automatically moving a flexible mirror in front of the CCD camera. This provides the telescope with an image even sharper than the Hubble space telescope!

Once Disney's done it, it's a done deal.
http://www.google.com/#hl=en&sugexp=ldymls&xhr=t&q=Treasure+Planet&cp=1…

That Niko Lang image of the geocentric model for the Solar System is colorful but all wrong, in ways that are actually quite instructive.

As always, thanks Ned! Your cosmology tutorial remains one of the gold standards in terms of rigor and clarity; I always appreciate the links you have to share!

I have a question concerning the following foto - .
Is it freely available and would we be allowed to use it in a presentation.

Thanks for your effort