"I don't know whether these people are going to find themselves, but as they live their lives they have no choice but to face up to the image others have of them. They're forced to look at themselves in a mirror, and they often manage to glimpse something of themselves." -Antonio Tabucchi

It's one thing to look up at our galaxy in the night sky, and see the billions of stars clustered together across the great expanse of space. 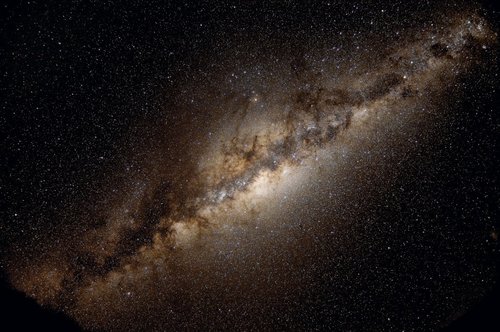 But what, exactly, do we look like? It is, perhaps surprisingly, one of the more difficult questions to answer. For example, you know what color your eyes are, but that's only because you've either seen your own reflection, a photo of yourself, or some trustworthy source has told you what they see when they look at your eyes.

But what about our own galaxy? There are, after all, no reflections of our Milky Way lurking out there in space for us to look at, and we've (clearly) got all that dust in the way, blocking our light. 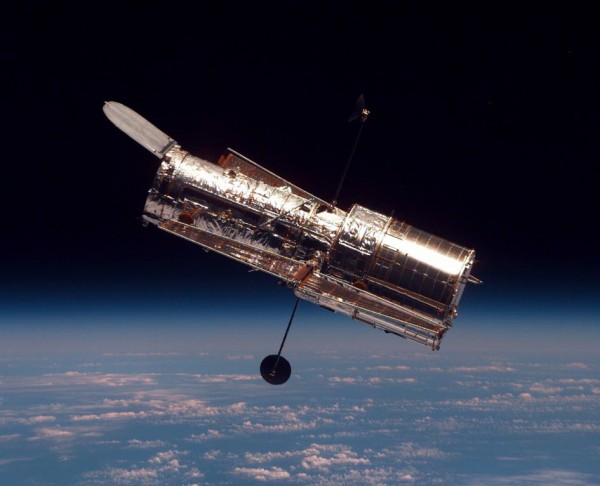 But we do have the incomparable Hubble Space Telescope out there, photographing what very well may be our galactic dopplegangers. And taking a look 46 million light years away, at NGC 2841, Hubble -- with its new Wide-Field Camera 3 -- took the following (huge) picture. (As always, click it for the full version.) 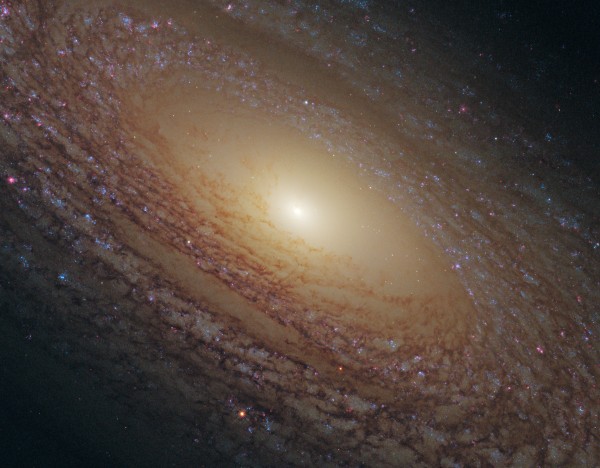 Comparable in size to the Milky Way, NGC 2841 also has a bright central bulge, two sweeping spiral arms, and huge lanes of dust. In fact, except for the fact that the Milky Way has -- we're pretty sure -- a small bar in its center, this galaxy is an awful lot like our own, and might very well be nearly identical to what we look like from a distance.

But this is a really high-resolution image; let's see what's inside! 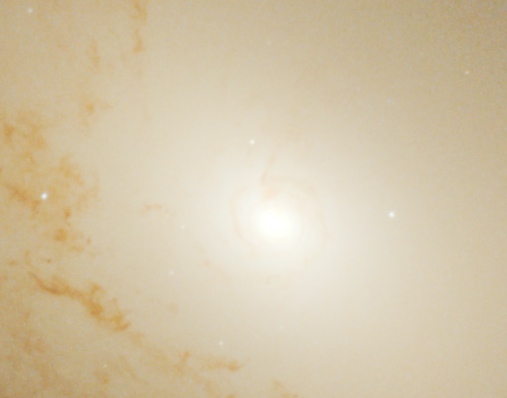 This is the core of this galaxy, where the disk gives way to a bright central bulge, containing over a billion stars in this region.

"Hang on," I can hear you say. "Isn't there supposed to be a black hole at the center? Why is it so bright?"

The center of our galaxy is filled with hot gas, dust, and stars. And in fact, you need to zoom way in on the center to even begin to see where the black hole might be. 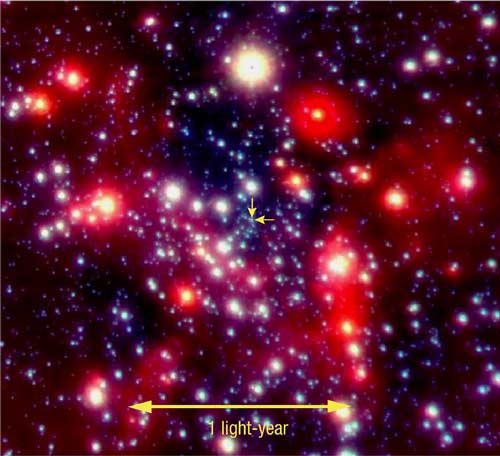 Contrary to popular belief, the black hole only keeps light from escaping from a volume about the size of our Solar System: maybe a light-day at most. But the central bulge is millions of times as large as that, spanning thousands of light-years. Up close, this galaxy's bulge probably looks similar to our own, and from a distance, we probably look like NGC 2841's core. 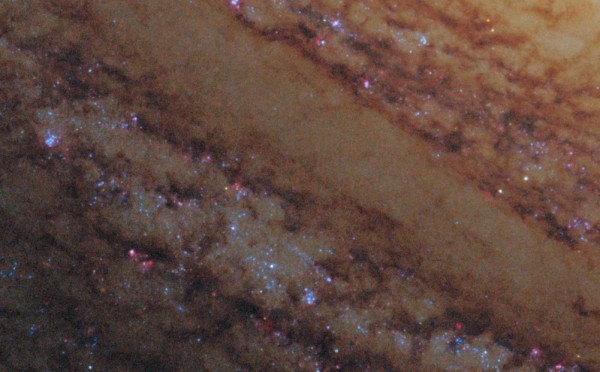 What about these dust lanes? As you saw up top, the Milky Way has these, too. And if you looked edge-on at NGC 2841, you'd probably find that the dust blocked much of that galaxy's light, too. But to someone looking down on (or up at) our Milky Way, these dust lanes would probably be as prominent as they are in the above image. 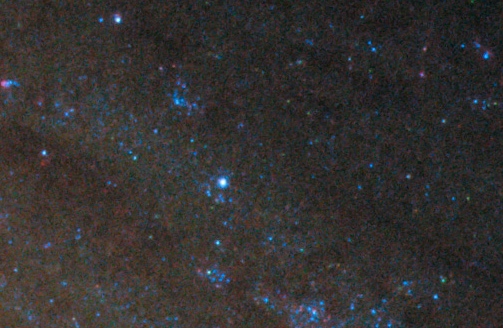 But what of all these bright blue regions? They line the galaxy's arms, and peek out even through the dust.

These are regions where hot, young, big, bright, blue stars live! The youngest, hottest stars are the ones that emit the most bright blue (and ultraviolet) light, just like they do in our own galaxy. In fact, where do we find them here? 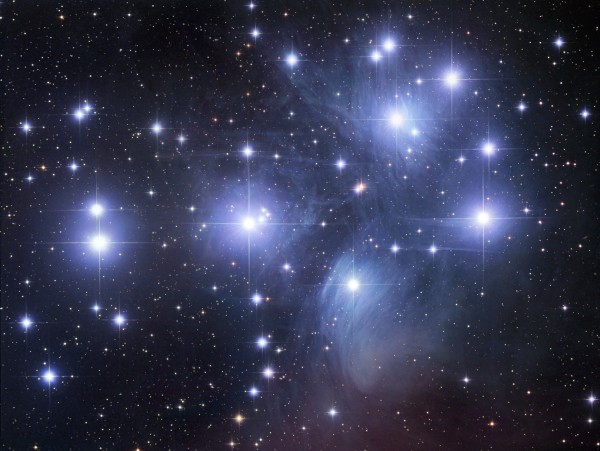 In young star clusters, like the Pleiades, above. The brightest blue stars have an estimated lifetime of only a few million (or even just a few hundred-thousand) years. The bright blue lights in NGC 2841, since it's 46 million light years away, are likely all from stars that are already dead!

But in there, among the blue stars, you might see a different color if you look closely. 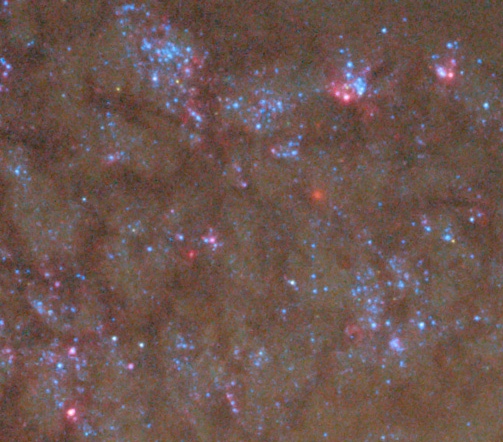 Do you notice those bright red regions? These are known as HII regions, which is astronomer-speak for saying that there are hot young stars forming in there right now, but it's surrounded by neutral hydrogen gas. Why is it red and not blue, like the stars?

That's hydrogen's fault! Neutral hydrogen absorbs most of that light, but emits only at special frequencies, the most visible of which is that red line in the image above. In fact, we have plenty of regions in our galaxy, and they make up many of your favorite nebulae. One particularly pretty example is the Omega Nebula, M17, shown in true color below.

And that's what we might look like at a distance, and that's also what that distant galaxy might look like up close! Hope you enjoyed the picture show and the beautiful science that goes along with it!

Ethan, Phil Plait blogged on this galaxy recently, and his take is a bit different. He says 'This type of galaxy is called flocculent: with lots of short arms instead of a two or three long, grand, majestic ones.' whereas you say 'NGC 2841 has..., two sweeping spiral arms, and huge lanes of dust.' Is this a chimerical galaxy? :)

Phil is not wrong, but it's very tough to place galaxies into these neat little boxes or categories. I suppose you could make the argument that there are many short arms, or that there's just one giant sweeping arm that goes around and around, or anything in between.

After all, take a look at this (zoomed out) image, and what do you see?

In reality, all spiral galaxies rotate at a higher angular velocity close to the interior, and "wind up" over time. What we're seeing is a very wound-up galaxy, and it's totally a judgment call as to how many you count. I'm not going to assert, "I was right and Phil was wrong," but I'll let you make your own call.

Thanks Ethan, I'm so unqualified to determine who or what is the correct answer. I just found it interesting that you can get to distinct, but cogent descriptions of the same data.

The fourth picture (close up of the core) is full of faint concentric circles. Do we know what these are?

My somewhat educated guess would be that those are faint dust lanes.

The 'dust', by the way, consists mostly of very tiny particles, like those in cigarette smoke. By mass, they're only about 1 percent of the interstellar medium, but they scatter and absorb light much more effectively than the gas, so that's what you see in outline against bright sources such as the central bulges of galaxies.

(Disclaimer: I'm a stellar astronomer, with no particular expertise in the fine points of galaxy morphology).

@6 For most of us, saying, "I'm a stellar [job title]," would just be a somewhat obnoxious boast, but you get to do it with a straight face. Great perk! :)

Upon close examination, the "faint concentric circles" seen in the forth picture appear to form a spiral arm which fits in with the pattern seen in the previous picture which shows the rotation of the whole structure.

I don't know how similar this galaxy actually is to the Milky Way. From what I recall, the MW is a barred spiral with (pretty much) two distinct arms. The other one does look more "flocculent."

For a layman with a life-long astronomical interest, your blog is a wonderful source of continuing education. Thanks, Ethan!