Weekend Diversion: A Planetary Special for the Morning People

"If you're going to do something tonight that you'll be sorry for tomorrow morning, sleep late." -Henny Youngman

Normally, the best wonders of the night sky -- stars, planets and beyond -- happen, well, late at night. But every once in a while, it's actually the very early morning sky that holds the greatest sights. Just make sure you get up before -- as David Grisman and Tony Rice might tell you -- your sky is ruined by the

Morning Sun.
Why's that? Well, if you look to the East, just before sunrise, you might see a sight like this: 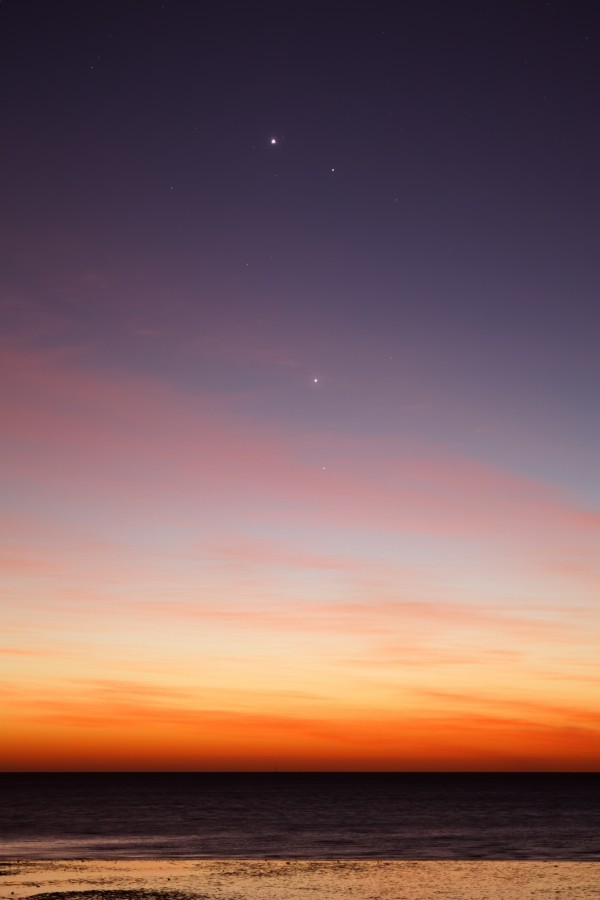 Well, what do we have here? Highest above the horizon, rising about 45 minutes before the Sun, are Venus (the bright one), in a waxing, nearly full phase, 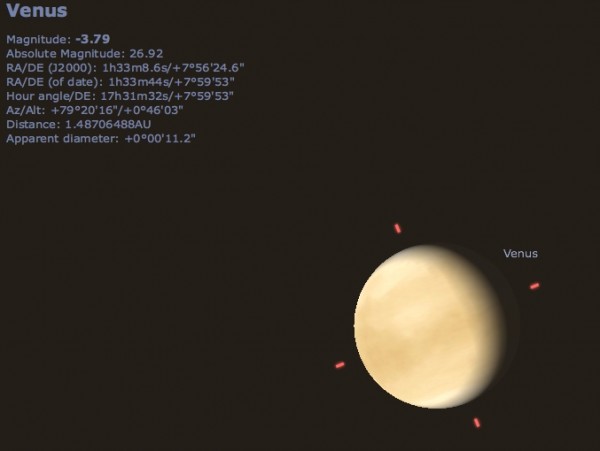 alongside a somewhat dimmer Mercury, the most challenging planet for astrophotographers. 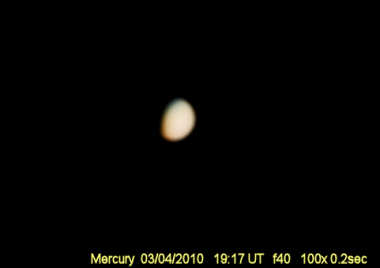 (Although when it's caught, it can be incredibly rewarding, as it was for astronomy.com member Aratus, who posted his image here.)

Now, Mercury and Venus, as the nights go by, are on their way down, as they head behind the Sun as seen from Earth. But coming up, higher and higher as the days go by (and about 10 minutes later at this point), are bright Jupiter and (somewhat) dimmer Mars! The early morning sky, tomorrow morning (the 8th of May) will look something like this: 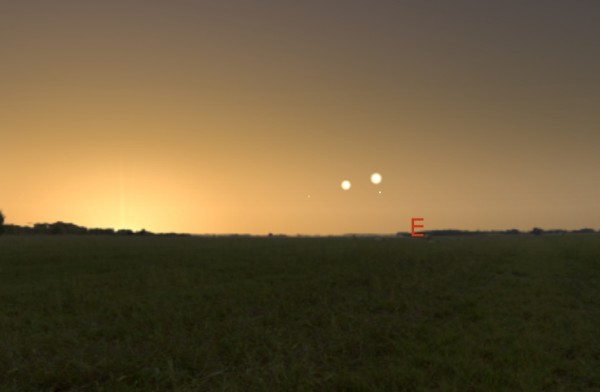 While this shot is what the configuration of planets will look like just minutes before sunrise, under clear skies (and especially if you have an ocean or lake to look out over) you should be able to see all four of them. Jupiter, if you manage to catch it through a telescope, will, as per usual, have all four of its moons clearly visible! 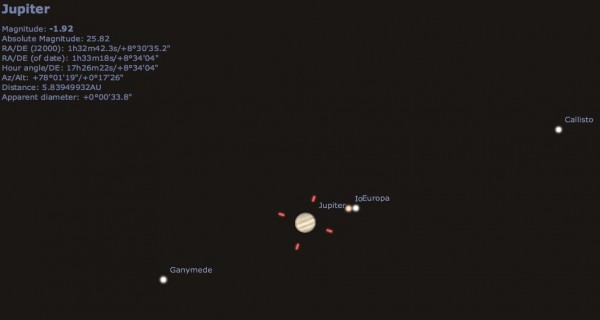 (Can you see why I've fallen for Stellarium? If you're a night-sky enthusiast, and you have a mac, windows PC or linux box, you can download it for free now.)

So what's going to happen, you ask, as the days and nights go by? What will happen as Jupiter climbs higher and Venus sinks lower? Will you ever, possibly, get one of the most sought-after visions ever: of Venus transiting Jupiter?! 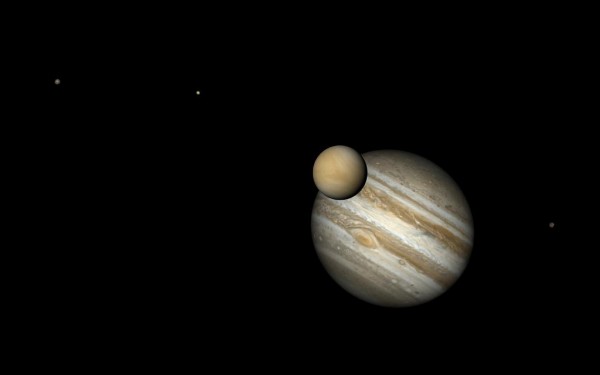 Unfortunately, as far as I can tell, that hasn't happened since 1818. It'll happen again in 2065, but that's a long way off! But don't despair, in just three days, we'll get a spectacular near-miss of Jupiter, Venus, and Mercury! 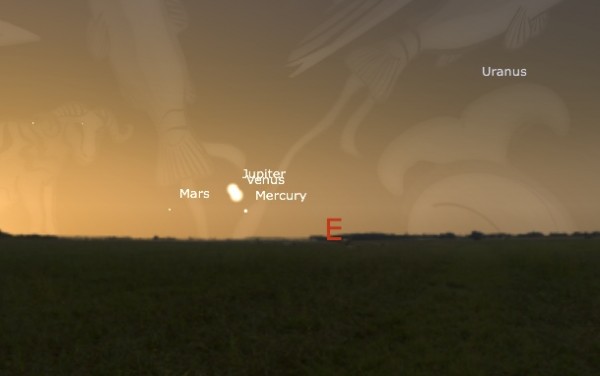 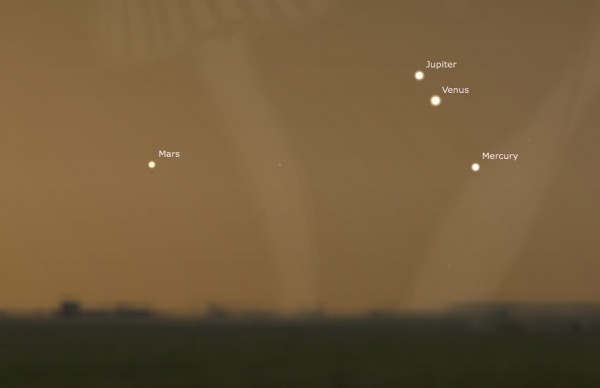 Again, stellarium. A great way to kill a weekend. Or a week.

It's going to be best for those of you close to me -- on the West Coast of the United States -- where dawn coincides with Jupiter & Venus' closest approach!

So if you're going to get up early, look to the East, and you might have a chance to see four planets all at once, armed only with your eyes! For those of you out there with clear skies and low horizons, know how jealous I am of you, and I hope you wholeheartedly enjoy the view!

Hey, America! Break out the Binoculars after Sunset and see Uranus tonight!

"The phenomena of nature, especially those that fall under the inspection of the astronomer, are to be viewed, not only with the usual attention to facts as they occur, but with the eye of reason and experience." -William Herschel We live in the most plentiful of scientific times, where the full…

A Feast for your Naked Eyes: Supermoon, Solar Eclipse and Venus Transit!

"Without a wish, without a will, I stood upon that silent hill And stared into the sky until My eyes were blind with stars and still I stared into the sky." -Ralph Hodgson The next month -- from May 5th to June 5th -- brings three of the most spectacular astronomy sights possible on Earth back-to-…

Weekend Diversion: Discover the Night Sky for Yourself!

"They will see us waving from such great heights 'Come down now,' they'll say. But everything looks perfect from far away 'Come down now,' but we'll stay." -The Postal Service Whether you're under urban, city skies, where only a few dozen stars are visible on a clear night, or beneath some of the…

Too bad it's cloudy here in Seattle. Some day I'll move to Albuquerque and head up to the mountains to see sights like this...

But don't despair, in just three days, we'll get a spectacular near-miss of Jupiter, Venus, and Mercury!

Needs a bit of clarification. Do you mean three days from today, i.e. the morning of the 10th, or three days after the "tomorrow morning (the 8th of May)" that you'd previously mentioned, i.e. the 11th?
Hmm, lemme poke a bit at XEphem (my own preferred planetarium program, but I don't think it does Windows). . . .
OK, looks like the 11th is much closer, so I'll take that to be what was meant.

"Look to my coming on the first light of the fifth day, at dawn look to the east."

Here in Chile you can clearly spot the four of them a bit before dawn, when it`s still dark outside. I`ve been watching Venus and Mercury all year on my way to work, but I only noticed Jupiter and Mars last week.Thanks for the post, I`ll make sure to check out the near-miss!