Hey, America! Break out the Binoculars after Sunset and see Uranus tonight!

"The phenomena of nature, especially those that fall under the inspection of the astronomer, are to be viewed, not only with the usual attention to facts as they occur, but with the eye of reason and experience." -William Herschel

We live in the most plentiful of scientific times, where the full extent of both our experience and understanding has expanded tremendously since the time of Herschel. You must remember that to Herschel, living in the 18th century, there were but six known planets (including Earth) in the Solar System: Mercury through Saturn. 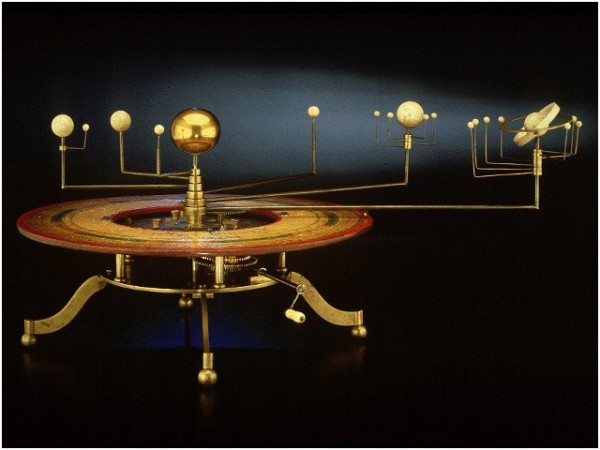 While each of these classical, wandering objects can easily be seen with the naked eye under the right conditions, the seventh planet, Uranus, was not discovered until 1781, by William Herschel himself. Under the right dark sky conditions, Uranus is just barely visible to the naked eye, right at the limit of human vision. Unless you know where to look at any given time, it's very unlikely you'll see it.

But if you take a look at the sky just after sunset, tonight, you'll be in for a remarkable treat. Particularly if you live in the Americas. 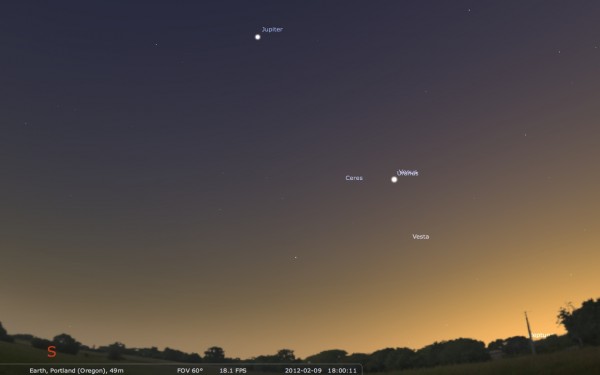 As you may have noticed, looking towards the southwest portion of the sky just after sunset, there are two very bright objects hovering above the horizon. Venus, the brightest object (other than the Moon) in the night sky, follows the Sun into the west, while Jupiter (the second brightest) lags behind by a few hours.

Up at my latitude (about 45 degrees North), this is what clear skies will look like around 6:00 PM. But wait just a bit longer -- maybe a half-hour -- and darkness sets in, allowing the light from those distant orbs in the night sky to dominate. 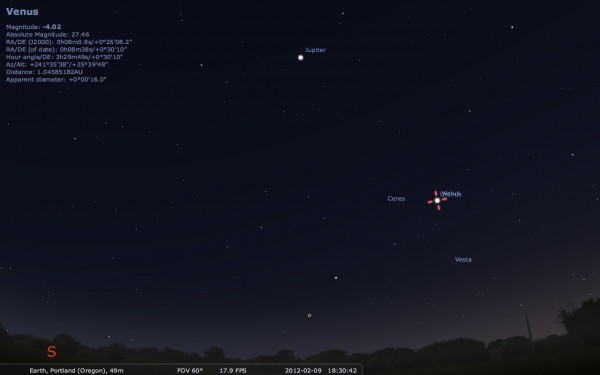 To your naked eye, Venus will still shine more brightly than any other object. It will be a few hours before the Moon comes up and a few hours before Venus falls down below the horizon. But coming closer to Venus than any other time this year is the planet Uranus, and those of you in the Americas will get to see it near its closest approach, right around 7:00 PM Pacific time.

Have a pair of binoculars languishing somewhere at home? Break them out, and point it towards Venus. If you let your eyes get adapted to the dark, even if you have relatively urban skies, here's what you're likely to see. 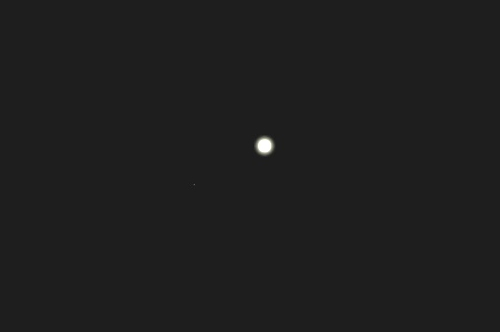 In addition to the bright disk of Venus, you're likely to see a small point of light a small distance away from it. While it may appear to be a faint star or a small moon, it's neither. Venus has no moons of its own, and there are no stars anywhere near that magnitude in this region of the sky. What you're seeing, billions of miles away, is the planet Uranus! 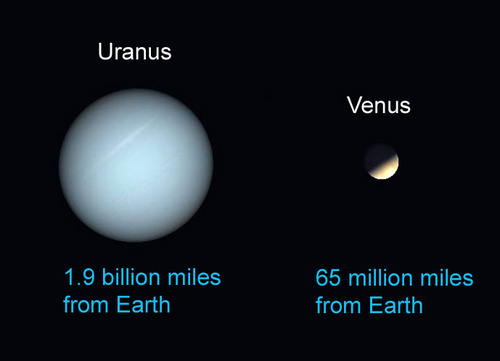 The bright, consistent disk of the planets make this a sight visible to many even in light-polluted regions. Unlike looking for a galaxy, nebula, or other extended object, everyone should give this a try. And for those of you with even a small telescope, you are in for a treat. Normally, Uranus is very difficult to find. But tonight, it will be separated from Venus by less than the angular size of the Full Moon! If you can find Venus in your telescope, you're not only likely to find Uranus, too, but to see that it is a disc, not just a point! 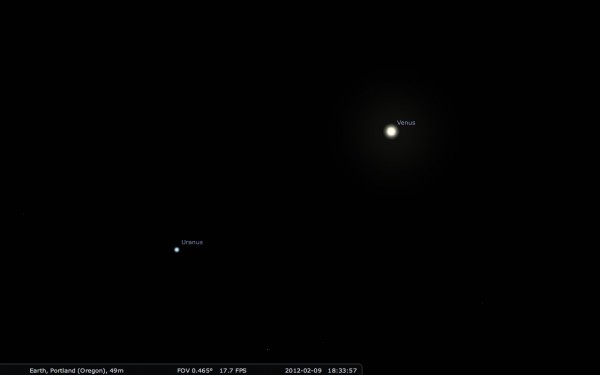 For a size comparison -- how big are these disks relative to the full Moon -- I give you this chart, modified from Peter Freiman's original. 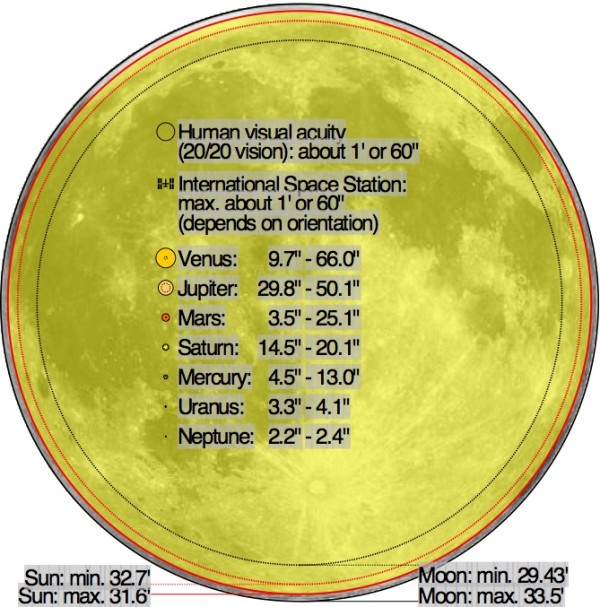 The planet Uranus is a sight that most people never get to see in their lifetimes, but if you've got clear skies and you're in the Americas, don't miss your chance to hunt for it tonight!

And I should make this clear: this is one night only!!!

Venus moves somewhat rapidly across the sky, at least in astronomical terms. While tonight, it will be separated from Uranus by maybe half the size of the full Moon (around 0.3 degrees), by tomorrow at the same time, it will be more than two full Moons away! 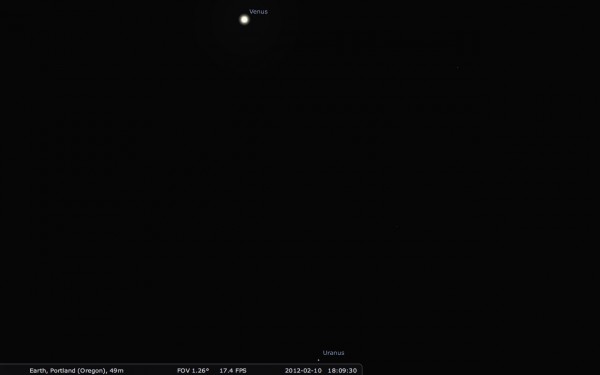 This close dance of Venus and Uranus is a rare one, and it's rarer still that they occur when both planets are in prime viewing location in the early evening.

Tonight: one night only, it's Venus and Uranus, together in the sky. Don't miss it!

A Feast for your Naked Eyes: Supermoon, Solar Eclipse and Venus Transit!

"Without a wish, without a will, I stood upon that silent hill And stared into the sky until My eyes were blind with stars and still I stared into the sky." -Ralph Hodgson The next month -- from May 5th to June 5th -- brings three of the most spectacular astronomy sights possible on Earth back-to-…

A Mysterious Light on the Darkest Night

It will shine still brighter when night is about you. May it be a light for you in dark places, when all other lights go out. -J.R.R. Tolkien The night sky is no stranger to most of you. Once the Sun goes down in the west, the sky darkens, turning ever-deeper shades of blue until it approaches…

The one and only true "Space Needle"

"If you don't like what you're doing, you can always pick up your needle and move to another groove." -Timothy Leary Up in the night sky, shortly after sunset, the night sky holds some spectacular sights. Some are permanent, some are transient, some have been known for thousands of years, and some…

"The image is more than an idea. It is a vortex or cluster of fused ideas and is endowed with energy." -Ezra Pound Back in the 1800s, observational astronomy was already entering its heyday. We had already discovered Uranus, the first planet not visible to the naked eye, knew of a number of comets…

Neat. Don't teach tomorrow so will be out tonight.
Side question: have you seen or used the Google Sky Map app? It uses the gps location of your phone (or android tablet in my case) to show you the locations of stars, planets, constellations, etc. very cool.

I have managed to find Uranus with some regularity with my 120mm refractor. With an appropriate eyepiece, you can see some color and a bit of size.

Also, I work (volunteer) as a telescope operator at the Chabot Space & Science Center in Oakland. During our public viewings (Fri/Sat 7:30-10:30) we normally point our 20in at more dramatic targets, but it is not unusual for one of the other volunteers out on the deck to have a portable scope pointed at Uranus or Neptune. Later in the night I might choose to point our 8in to Uranus if it is out, as a bonus for the grownups.

Wow. I hope the skies are clear tonight in Austin (but it's looking highly doubtful). Never would finding Uranus be as easy as pointing my scope at Venus with my widest field eyepiece (0.55 degree FOV) and finding it right there less than 1 FOV away.

'Course I've also never tried to make out Uranus' tiny dot while also dealing with being blinding by something as bright as Venus. So maybe not too easy -- enough to still keep it fun. :)

But probably not going to happen. :(

Is there a convenient location where I can get images like these for my own location? I have a great view of the SW sky with almost no light around but am not good at seeing things in the sky without a map

I stumbled upon it when I saw what I assumed was Venus and took out my android phone with Google Sky and pointed it at it. I couldn't make out the word Venus - looked kind of blurry and seemed to start with a U or a W. It was a superposition of the words Venus and Uranus. I came inside to look it up and found your web site which confirmed it and I quickly set up my telescope and it was just as your photos predicted. It wasn't too long when it was too low for me to see. Thanks for the tips and photos.

OMG, I saw them! I am totally geeking out over this. Yay for good [birding] binoculars. Called some friends, too, and told them to check it out. Venus and Uranus, one night only, together in the sky... Your fourth illustration is what it looked like from my vantage point in suburban SoCal: faint but clear. Awesome. Thanks!!

Best I got was last spring, when I got to see Saturn (and Titan!) through an 18" telescope.

It would have helped if you'd posted this somewhat earlier in the day. As it was, I had only a few hours' notice and didn't happen to check this feed until now.

But I appreciate the thought. Would be nice to see Uranus someday.

We really need to change the name of that planet. Even though the joke stopped being funny decades ago, I still can't help but hear the pun in "see Uranus tonight". (Pronouncing it "urine-us" only marginally improves the situation)

I support the Futurama solution.