Incredible Star Trails, from Earth and Beyond

"Building one space station for everyone was and is insane: we should have built a dozen." -Larry Niven

Here on the solid ground of the Earth, the Sun and Moon rise and set on a daily basis. During the hours where the Sun is invisible, blocked by the solid Earth, the stars twirl overhead in the great canopy of the night sky. 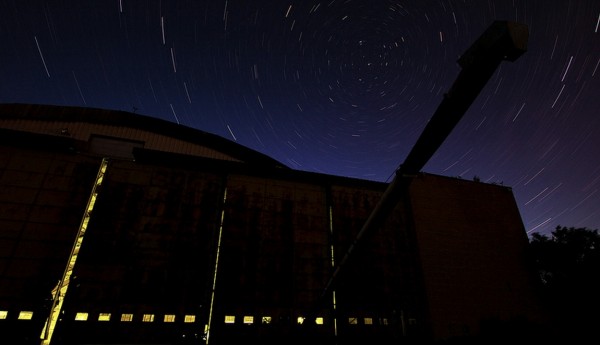 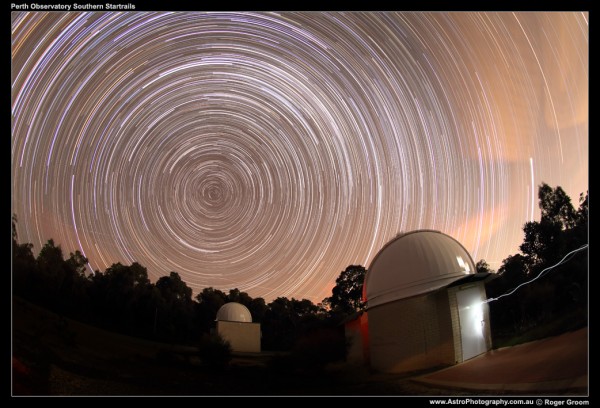 This, of course, is because the Earth rotates on its axis. The North and South Celestial Poles are aligned with that axis, and so the stars appear to, with a 24-hour period, rotate about that same axis.

But perhaps, you might think, you wouldn't suffer those same trails from outer space. Not being bound to the surface of the Earth, the stars would appear to be stationary, while the Earth beneath you would be the only thing that rotated. Where would you go to look and test this? 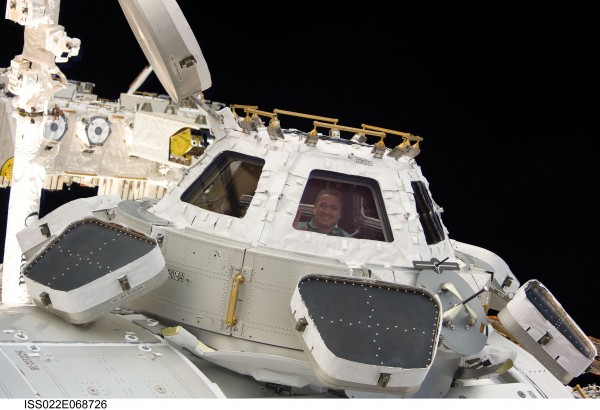 To the International Space Station, of course! The relatively new cupola, shown from the outside (above) and the inside (below), allows ISS astronauts to get a prime view of Earth and the 360° horizon, all at once. 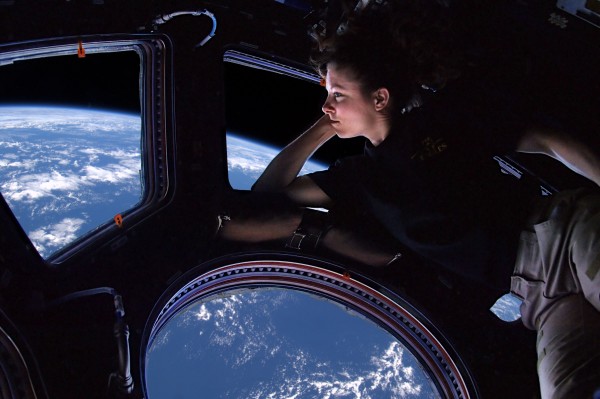 If this cupola-type structure in space looks familiar to you, that's because you've probably seen something very much like it, long ago, in a galaxy far, far away... 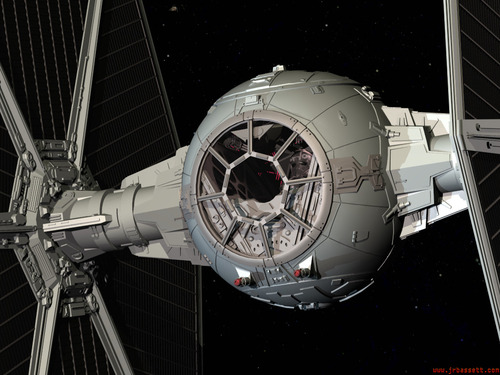 But I digress. Like practically every one of Earth's satellites, the International Space Station makes a nearly perfect, circular orbit just a few hundred kilometers above our surface. Since it's in low-Earth orbit, it zips around the Earth -- a more than 25,000 mile journey -- in just 90 minutes. 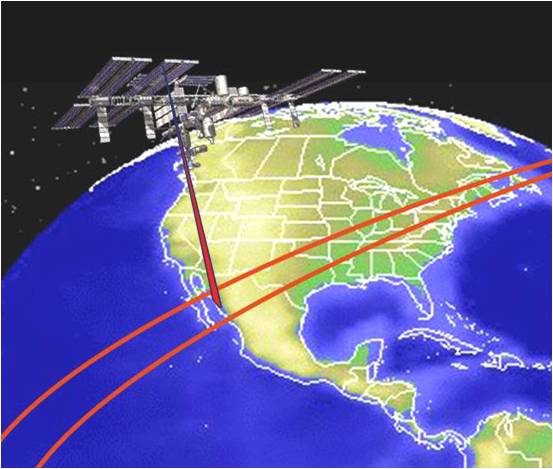 It needs to move at that speed; that's the only speed that will keep a satellite moving in a circular orbit just a small distance above the surface of the Earth!

But this isn't the only motion happening; while this is going on, the Earth is rotating beneath you, with a 24 hour period! 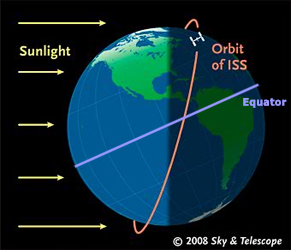 You've got a couple of options as to how you'd run your spacecraft. One option -- and this is what the Hubble Space Telescope does, for example -- is to totally ignore the Earth. Have your spacecraft not rotate at all, point it at a target away from the Sun, one where the Earth will never get in your way, and observe it for as long as you like. Run your satellite like that, and, like Hubble, you'll never see a star trail.

Image credit: Ground Track of the ISS during orbit #60142, via Heavens-Above.com.

Every ninety minutes, you'd pass from the equator up to the northern latitudes, then all the way down towards (but not quite flying over) Antarctica, and back towards the equator. Because the Earth is rotating, the longitude of the place you're passing over changes by about 20° every time the ISS passes.

But because the ISS is designed to look down, rather than -- like Hubble -- not rotating at all, it rotates once every ninety minutes, so that the cupola I showed you earlier always points directly down at the Earth. Which means, if you stuck a camera in the cupola, you'd be able to see something akin to what Alex Rivest has stitched together, below.

As you can see, the stars do, in fact, appear to rotate! This is entirely because of how the ISS rotates in space. Unlike the star trails on Earth, which would take 24 hours to make a complete circle, the trails on the ISS would make a complete loop in a mere 90 minutes, because that's the period of rotation of the ISS around the Earth. (Just like the period of the Moon around the Earth -- both the rotational period and the revolutionary period -- is one lunar month.)

This is by design, of course, and it allows the ISS's cupola to always point at the Earth's surface, perfect for studying our own planet from space. But you don't have to take my word for it, because I now have the photos to show you! 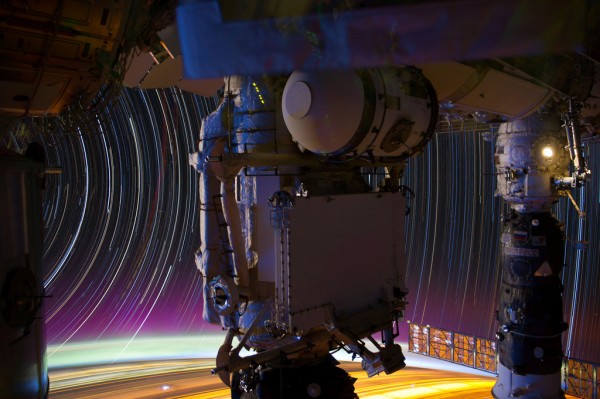 NASA astronaut and photographer extraordinaire, Expedition 31 flight engineer Don Pettit, took a whole slew of image composites from in cupola of the International Space Station, and stacked them together to produce these fabulous views of star trails from the ISS. 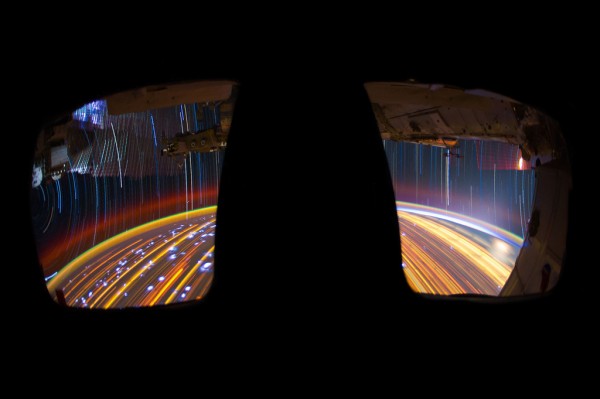 My star trail images are made by taking a time exposure of about 10 to 15 minutes. However, with modern digital cameras, 30 seconds is about the longest exposure possible, due to electronic detector noise effectively snowing out the image. To achieve the longer exposures I do what many amateur astronomers do. I take multiple 30-second exposures, then ‘stack’ them using imaging software, thus producing the longer exposure. 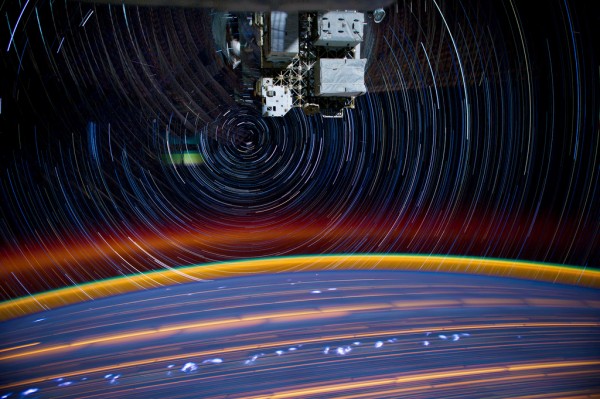 Unlike on Earth, the International Space Station's star trails don't grab either the North or South Celestial Poles as the stationary points that the heavens appear to rotate about. Because the ISS doesn't rotate with the Earth, the points that appear to be stationary are the ones along the ISS's axis-of-rotation, which precesses 360° throughout the course of a year!

In each composite photo, though, in addition to the stars and the star trails, there are some remarkable things to observed by looking at the Earth! 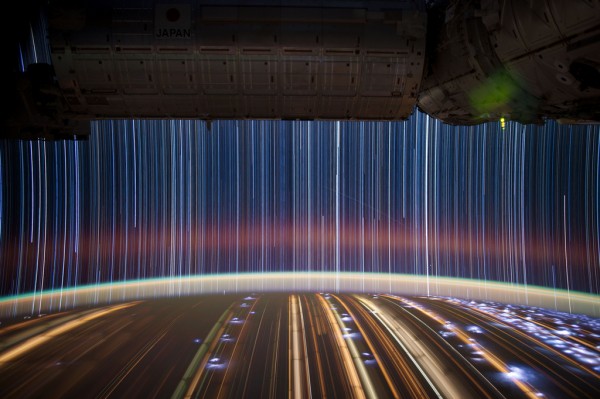 Above, for example, you can see the greenish airglow of the atmosphere, as well as the yellow streaks of passing cities and blue speckles -- which, believe it or not, are lightning strikes -- dotting the image.

The stars appear like rain, thanks to a narrow-angle photograph parallel to the International Space Station's direction of motion. 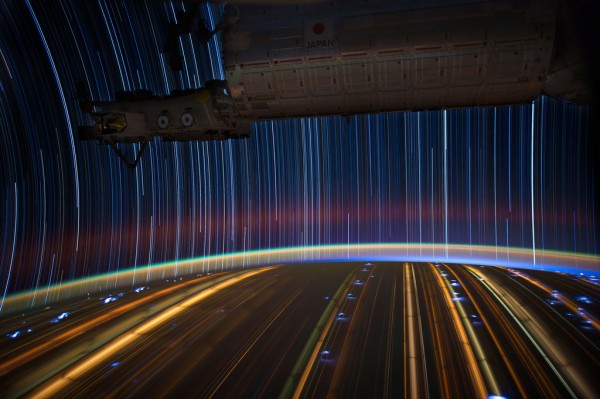 There's also, at much higher altitudes above Earth, a much fainter airglow that comes in a dim, red color. That's due to oxygen atoms very high up slowly de-exciting over the course of the night. While the bright, thin green layer is from a layer of air 90-100 km in altitude, the red layer is from 150-300 km up, nearly as high as the station itself! 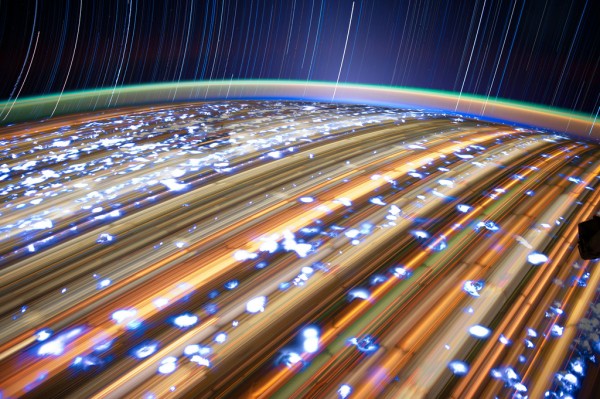 As you may have guessed, a thunderstorm produces spectacular results on a time-lapse photo, with every single blue speckle representing a lightning bolt. 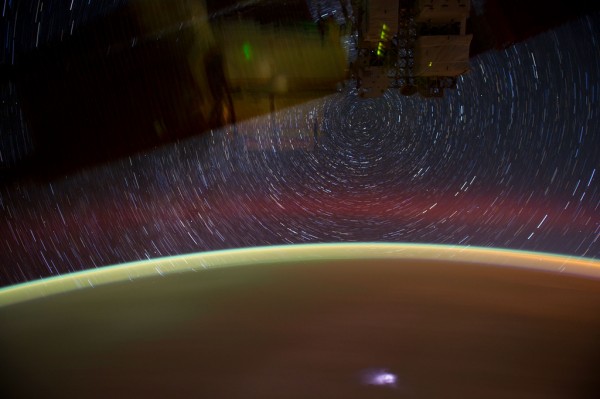 While over a calm region, a much more serene composite results. The "blur" you see in the upper-middle of the image? That's because the solar panels, necessary for powering the station, move as the ISS is in orbit, in order to maximize the power they receive from the Sun. 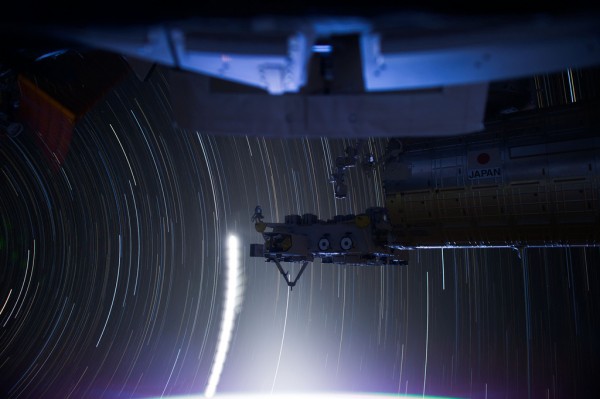 And while the stars may be dim, one object in the sky still appears incredibly bright: the Moon, visible above. Note how, without the Earth's atmosphere to refract and disperse the intense amount of light coming from it, there is no light pollution in the other parts of the sky resulting from the Moon!

And finally, an example to show you that not even Don's amazing photography and photo-stacking is flawless; even his star-trails sometimes suffer from imperfections! 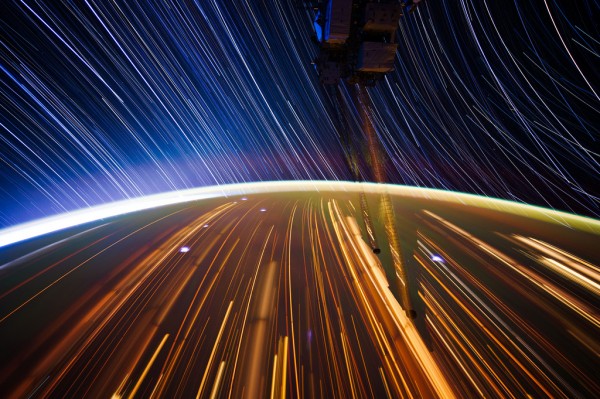 All told, Don has created 26 of these image composites, viewable on NASA's flickr photostream. These trails are different yet similar to the ones taken on Earth, and now you know the science behind it, as well as what you're looking at.

Now, go forth and enjoy them all!

“Building one space station for everyone was and is insane: we should have built a dozen.” -Larry Niven From Earth and beyond, these time lapses show our one-of-a-kind motion through the Universe. Here on Earth, the night sky (and all the stars in it) appear to rotate a full 360° every 24 hours,…

Mostly Mute Monday: What Do Star Trails Look Like From The ISS? (Synopsis)

"This job is a great scientific adventure. But it's also a great human adventure. Mankind has made giant steps forward. However, what we know is really very, very little compared to what we still have to know." -Fabiola Gianotti On Earth, star trails inevitably appear in any long-exposure image…

How long does a Solar Eclipse last?

"The moon shuts off the beams of the sun as it passes across it, and darkens so much of the earth as the breadth of the blue-eyed moon amounts to." -Empedocles, ~450 B.C. Less than two weeks ago, I saw my first annular eclipse, with some spectacular results at the moment of maximum eclipse. From…

How the Earth moves, and how do we know?

"Nature is relentless and unchangeable, and it is indifferent as to whether its hidden reasons and actions are understandable to man or not." -Galileo Galilei All of science is rooted in the idea that natural phenomena can be explained naturally, and that if we want to know how anything in the…

the idea that these are actual pictures - and an actual video - of our planet taken from the fringe of its atmosphere feels, to me, completely unreal. I'm so used to seeing these things on Sci-Fi shows, where they show you a rotating panorama of another planet - the idea that those types of images can be generated by a camera rather than created digitally seems utterly bizarre.

the fifth picture from the bottom has a number of broken star lines yet the adjacent star has no broken star track? Makes no sense. Suggests draftsman took too long a break. In addition, the star trails, usually congruent going into the same direction show some not part of the overall pattern of direction. What's up. I'd like to believe these pictures are untouched but I do have a brain and visual perception.

the iss does not rotate on an axis if it did why is the planet always visible. how can the iss travel around the earth in 92 min and still have ground level star trails.

cm, get an adult to help. have them stand in the middle of the floor. You walk around, always facingone direction, never turning round. Say, for example, always facing the road at the front of the house. Do you always see that adult as you go round?

Now try again and keep facing the adult in the middle of the room.

Do you find yourself turning around to keep them in view as you circle them?