"If a 'religion' is defined to be a system of ideas that contains unprovable statements, then Gödel taught us that mathematics is not only a religion, it is the only religion that can prove itself to be one." -John Barrow 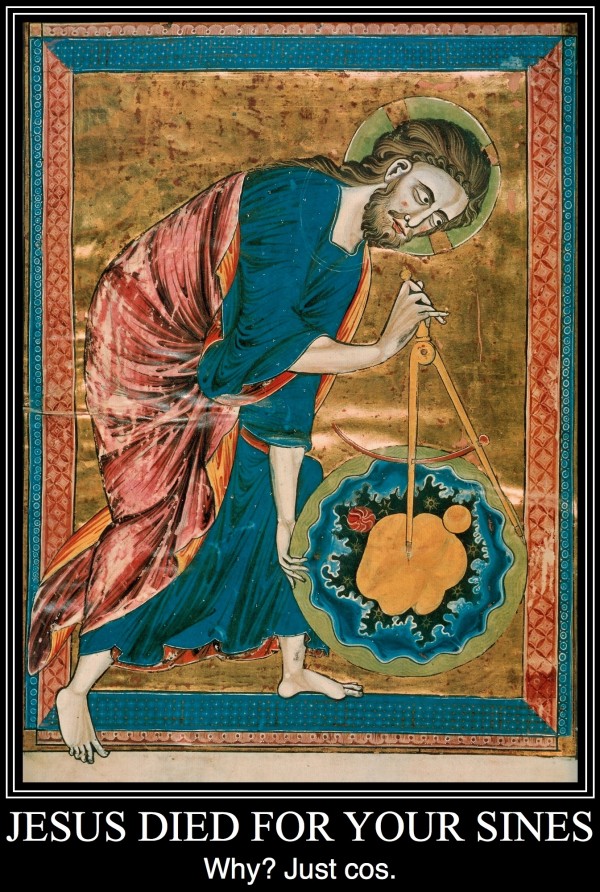 Also, for those of you who want something fun to puzzle over, try this fun math fact.

Have a good weekend!

*runs from the Fundies*

Is that an explanation? A coincidence? I dunno.

Looking at this sequence more generally, you have:

reading the quote you posted by john barrow, if religion is a set of unprovable ideas, and math can 'prove' itself to be a religion, then by contradiction, its not a religion !

> if religion is a set of unprovable ideas

I laughed. But that picture of Jesus intelligently designing the world creeps me out. His gaze is just a little too intense. And the inside of the sphere looks like a drug trip.

I prefer the Spaceman Spiff crashing planets together to get the math answer or the Dirk Derringer series, where Calvin gets beat up by goons, which leads him to the conclusion that it's a numbers game. The only number big enough to pull it off, of course, is Mr. Billion.

The inside of the sphere isn't a drug trip; it's obviously an indication of Jesus' use of fractals, in the creation of he universe. As for the intense gaze, you would prefer or would join those that accuse God of not paying attention, when creating said universe.

As for numerical coincidence: Numbers are what they are, no more no less; therefore, it would be hard, if not impossible, to prove that there is any coincidence to inherent properties. Though, as an astrophysicist should well know, that doesn't mean that the universe is deterministic, by any stretch of the imagination (okay, maybe you could stretch your imagination that far). bc

for more about the numbers Blaise is talking about:
http://oeis.org/A014105

Blaise Pascal - you are right :)

It sort of looks like a special case of an expanded pythagorean theorem. hmm, yes.

So what is Ethan's equation a sp[ecial case of?

So Ethan's special equation is a special case of the general expansion of pythagorean theorem to any number of dimensions.

Of course, the pythagorean theorem is valid in any number of dimensaions. Fun.

"People are entirely too disbelieving of coincidence." - Isaac Asimov

"Is not all this an extraordinary concatenation of coincidence?" - Isaac Asimov, from Foundation’s Edge

That Bill Watterson from Calvin and Hobbes is the strangest character he just stopped drawing those cartoons and has disappeared as if he was sucked into a Black Hole ... no information is coming out ever-since ... it's too weird 4 me.

Even weirder is as an anagram:

We will never know whether Fermat's Last Theorem was a joke....

Ian, as best we can tell, FLT was proven several years ago.

That's a hoax! God on that picture uses compass to shape a Mandelbrot set, which certainly was not known in medieval times! :-)

The irony? Atheism IS a religion,,, aka,, a "belief in things unseen" (see panel 3). To believe that the double helix (20 in the simplest life we know) magically floated together, delicately and cogently, only to destroy itself to replicate?,, aka,, ABIOGENETIC ORIGIN OF LIFE,,, is a leap of "faith", the odds of which are almost infinite.

Nope, atheism is no more a religion than not collecting stamps is a hobby.

"ABIOGENETIC ORIGIN OF LIFE,,, is a leap of “faith”, the odds of which are almost infinite."

Yet over the course of a billion years, that dice gets rolled again and again. After a while, it turns up the right number.

Unless the odds against it ARE infinite, abiogenesis requires no faith.

For "unseen" substitute "for which there is no evidence". There is evidence besides being able to see. Maybe you were just being brief, but I thought I should straighten that out.

We have pretty good evidence that there was a point in time at which there was no life on Earth, and a time later than that when there was. This is evidence that abiogenesis occurred.

That it occurred is a different question that identifying the mechanism by which it occurred.

Given our experiences, there is no reason to specify supernatural intervention as the default answer for any phenomenon for which we have no identified mechanism, if only because there is no previous example where, after investigation, that turned out to be the case. We just don't see magic occurring.

Harry from Tennessee: Bravo. The math for evolution doesn't add up. Even billions of years is not long enough to go from single cells to the incredible complexity of today's living organisms. Where are the transitional creatures? Why aren't we still changing, becoming more complex? God as Creator, Word of God as truth, seeing how the evidence fits those stories brilliantly: Why is that so hard? Why the knee-jerk reaction of that not being scientific thinking?

With all the infinity of numbers and the higher order infinity of how to combine them,you can get any pattern you wish to see by "proper" selection of the values you assert need to be looked at.

IOW if you look for patterns until you get one this is no more than the texas sharpshooter fallacy.

"Even billions of years is not long enough to go from single cells to the incredible complexity of today’s living organisms. "

You can get from "patch of skin that is minimally light sensitive" to "full human eyes with humous and varifocal lens" in 30,000 generations.

Because any useful change is kept, it's not a random walk to "having eyes" (or "making a hippopotamus") but a progresstion from "not having eyes" (or "being a simple RNA replicator") to the any advanced product via incremental change without direction, but keeping those elements that are useful.

"There is evidence besides being able to see"

cf "If you eat of the fruit of the tree of life, you will surely die". A HUGE porkie pie there from the mystic Pinocchio. Not to mention the bats aren't birds.

"seeing how the evidence fits those stories brilliantly"

If by "brilliantly" you mean "really crappily and only after the fact". Um. No. Not even then. They don't fit the stories. See bats' "kind" (hint: it's not "bird kind").

Adam and Eve ate the fruit, didn't die from eating it.

PS that tree was really "knowledge you're a slave". Not to mention that god's being portrayed as a huge dick there. Put the damn tree in hell or underneath a huge mountain and put a label on it "NO EATING". Totally avoiding the need to kill himself later so he can kid on he cares for us.

No doubt. Threatening adam and eve with death when they had no concept (if you buy the mythology) is one of the largest bit of dickery.