"Who is wise? He that learns from everyone.
Who is powerful? He that governs his passions.
Who is rich? He that is content.
Who is that? Nobody." -Benjamin Franklin

Welcome to Messier Monday, where each week we take a journey into one of the 110 objects in the Messier Catalogue of non-cometary deep-sky objects. Ranging from stellar remnants to star clusters to globular clusters to distant galaxies and more, the Messier objects tell a rich and varied story that you can share in yourself through even the simplest of astronomical instruments. 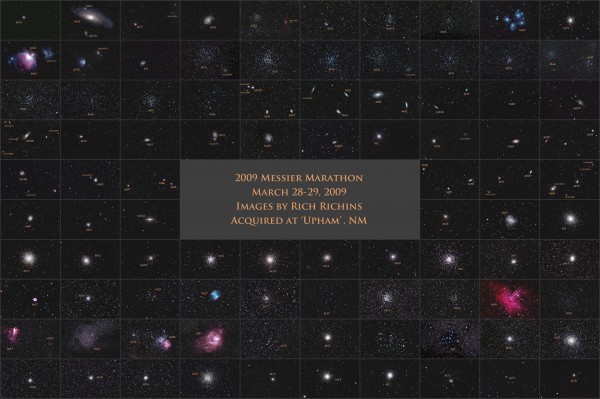 Image credit: Rich Richins, of all 110 Messier objects (in no particular order).

This week, I'd like to introduce you to a rich collection of stars that -- unless you know about it -- you've probably never even stopped to consider. At this time of year, the great winter constellation of Orion rises in the eastern skies shortly after sunset, dominating its section of the night sky. 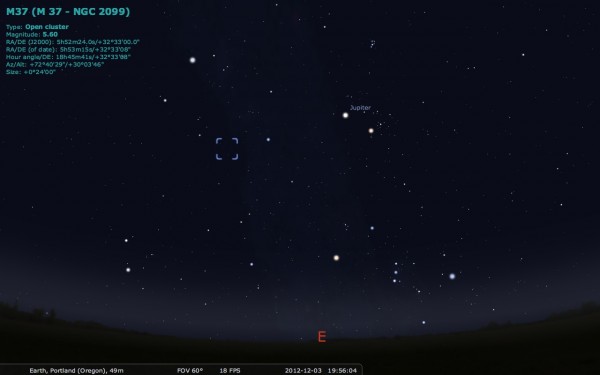 Image credit: me, created with the night sky software, Stellarium.

Farther up in the sky, the very bright star Capella (upper left) and the red giant Aldebaran (next to Jupiter right now) outshine all the other stars around them. But near Capella -- brightest star in the constellation Auriga -- a remarkable deep-sky object can be found just outside the border of the bright irregular hexagon taking up the bulk of that section of the sky. 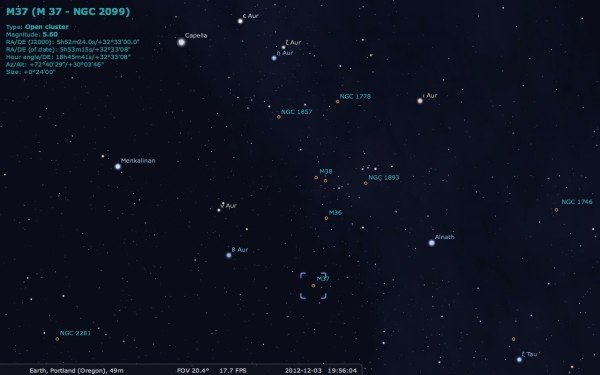 Image credit: Me, using the software Stellarium, from http://stellarium.org/.

While this isn't really visible without binoculars or a telescope, it stands out as an extremely dense region of stars relative to the galactic background surrounding it, despite being over 4,500 light years away! 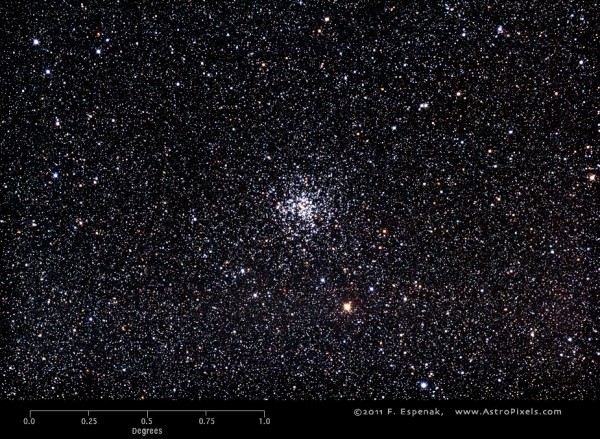 Located in the opposite direction of the galactic center from our perspective, Messier 37 is the brightest open cluster in its part of the sky, and packs an estimated 2,000 stars in a region of space just 20 light years in diameter. And -- let's be honest -- compared to the last open star cluster we looked at, Messier 45 (the Pleiades), it might not appear as spectacular. 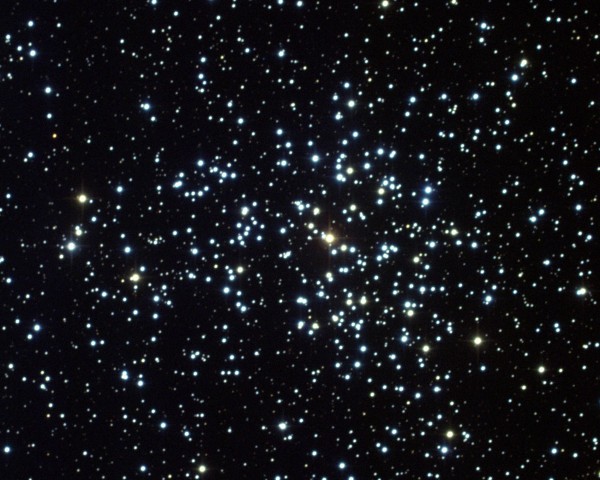 But -- in its own way -- it is just as spectacular. But the beauty of this cluster might not be apparent at a mere glance; one must take the time to learn just a little bit about it to appreciate it. While the Pleiades is brilliant, blue, and visible to the naked eye, Messier 37 is actually twice as massive as its better known sibling.

It's also ten times farther away and about five times as old, coming it at around half-a-billion years, which is old for a star cluster. 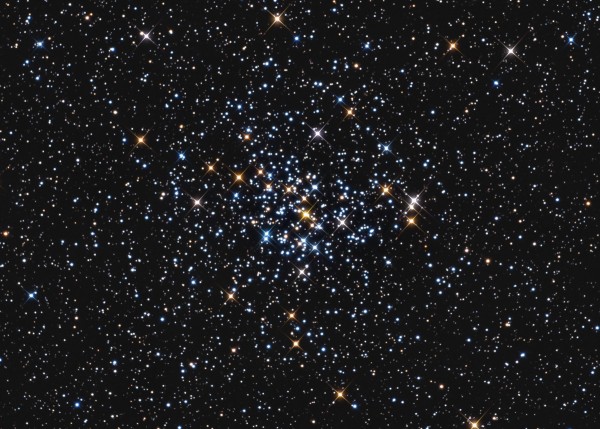 The brightest and most massive stars that existed in this cluster died a long time ago; there are no O-class stars and only the dimmest B-class stars (the B9's) are still alive today; these are the brightest and bluest stars visible in the image above. But there are a sizable number of bright red stars in there, something completely foreign to the Pleiades. 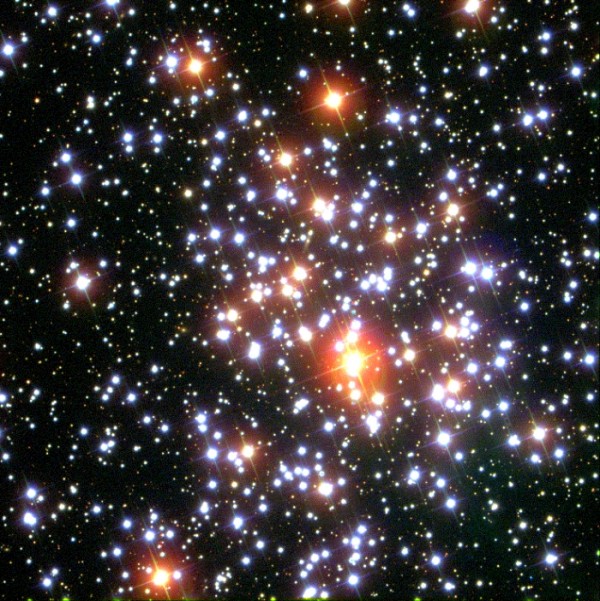 It takes hundreds of millions of years for stars -- the most massive stars that won't die in a catastrophic supernova -- to reach their red giant phase. That is, to burn up all of their core's hydrogen and begin fusing helium instead. In stars that are too massive, helium fusion is a quick phase, and it doesn't take very long to go from hydrogen fusion to a supernova.

But in stars below that mass threshold, the helium-burning phase itself can last tens-to-hundreds of millions of years itself, something that we're seeing right now in this dust-free, evolved star cluster! 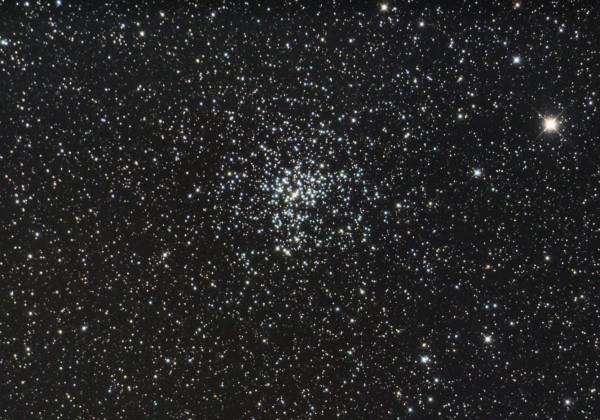 Unlike a supernova, these evolved stars will die by blowing off their outer layers in a planetary nebula, similar to the eventual fate of our Sun. Only, the stars in this cluster are still so young -- at half-a-billion years -- that even with all the right ingredients for life, it's possible that a world identical to Earth wouldn't have evolved its first living organism yet.

Messier 37 has never been viewed with a great space telescope like Hubble, but what's truly amazing is that dedicated amateurs, like all images (except the SDSS) above, can get just as good a view as the pros can, as the Canada-France-Hawaii telescope team's image, below, demonstrates! 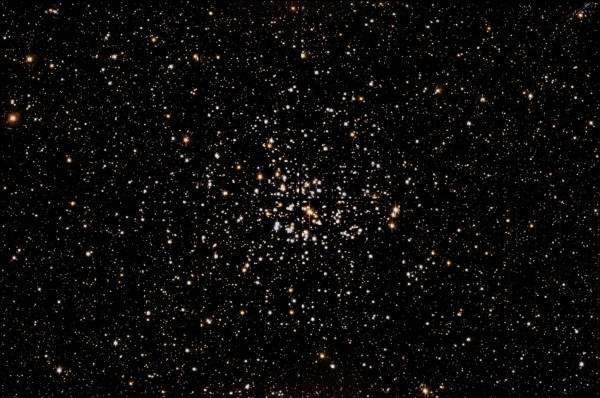 In another few hundred million years, this star cluster will likely break up due to gravitational interactions, spreading the individual star systems throughout the galaxy, and filling it with yet another generation of rich new worlds, and another set of lottery tickets towards evolving intelligent, spacefaring life.

So, including today’s entry, we’ve covered seven of the 110 Messier objects so far:

Which one will be next? Join me next week for another Messier Monday, where we'll bring you the greatest sights and stories accessible to practically everyone with good skies and a little time, and let me know which object you can't wait to hear about!

Ethan, small typo. Capella is in the upper left, not right.

Ethan Hello:
I was curious about the dark spots on M37 images, so I zoomed in (using photo software) on a few of the spots near the center of the photo's, and it seems like there is an occlusion of light from behind the spots, as if the spots are actually dark bodies (maybe smoke, or maybe extremely large rocky orbs) rather than just open space. Ref photo's above of Richer - Durrell, Twin City, and Ivanov.