Messier Monday: A Dusty Open Cluster for Everyone, M25

"The light which puts out our eyes is darkness to us. Only that day dawns to which we are awake. There is more day to dawn. The sun is but a morning star." -Henry David Thoreau 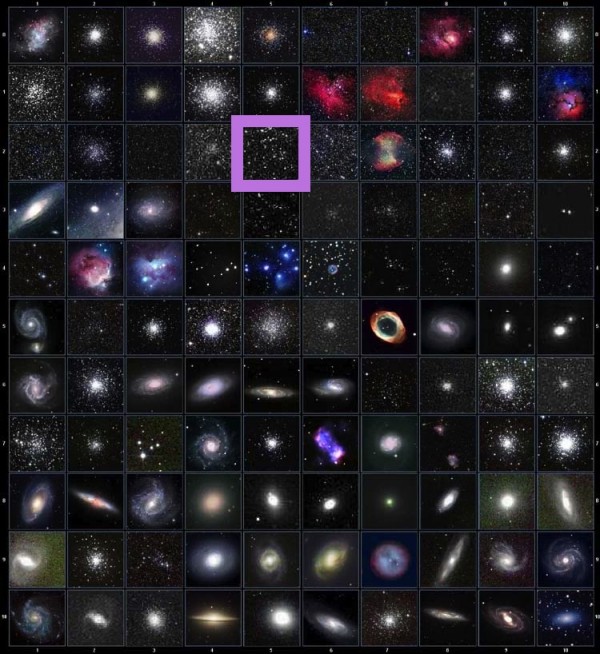 Today, to mark our hitting the quarter-century mark in looking at these nebulae, I'd like to highlight one of the nebulous, just-barely naked-eye wonders of the night sky: Messier 25! Here's how to find it. 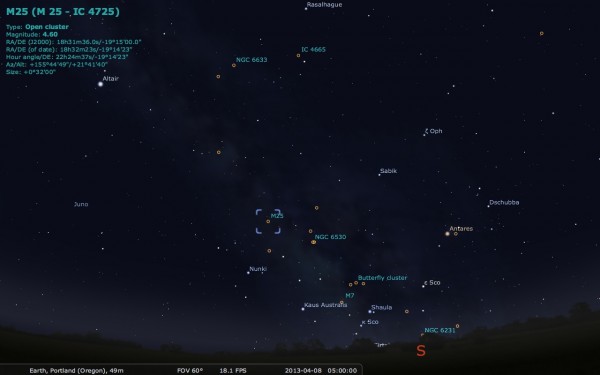 Image credit: me, using the free software Stellarium, from http://stellarium.org/.

The constellation of Sagittarius contains a collection of 8 bright stars, sometimes known colloquially as the teapot (and seen here before). Just before dawn in the morning skies at this time of year, the teapot will rise in the south-by-southeast skies. And along the plane of the Milky Way, a little farther up than the handle of the teapot, two faint stars will be visible to the naked eye in the position indicated by the blue box, above.

And if you point a pair of binoculars (or a telescope) at them, just slightly back down (less than 1°) towards the horizon, you'll be treated to a glittering star cluster. 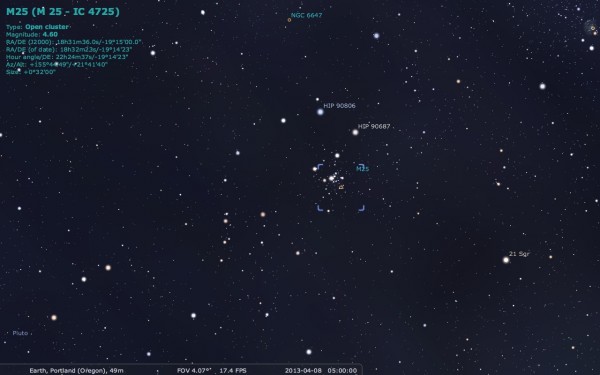 Image credit: me, using the free software Stellarium, from http://stellarium.org/.

That's Messier 25, one of the few Messier objects visible to the naked eye under ideal sky conditions!

Like many Messier objects, this one was known since earlier times, discovered in 1745 by Jean-Philippe Loys de Chéseaux. Much like the Pleiades, this is a young star cluster, with an estimated age of just 90 million years! But unlike the Pleiades, which is just a few hundred light years away, M25 is over 2,000 light years distant! 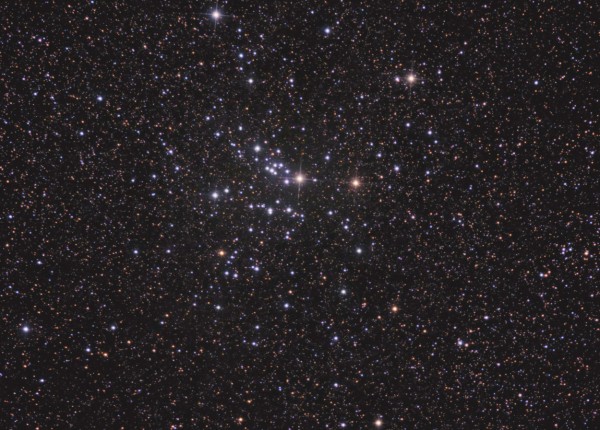 This is exactly what a relatively young (but not super-young) star cluster ought to look like! 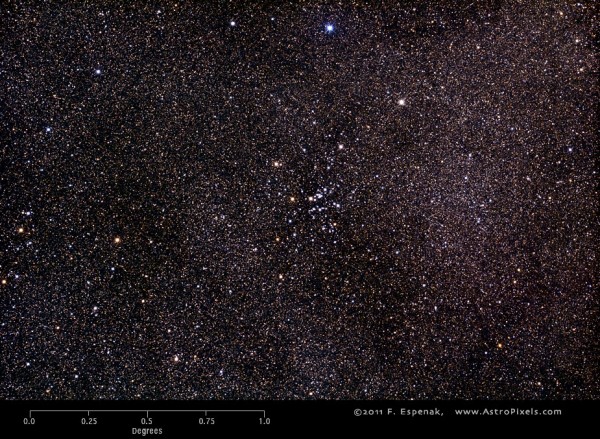 First off, like practically all open clusters we know of, it's in the plane of our galaxy. This is where the open clusters tend to form, as dense molecular clouds contract and collapse under the influence of gravity and the perturbations of nearby matter to form new stars. The above picture, by Fred Espenak, illustrates how dense the stars are when we gaze into the galactic plane.

Second off, a wide variety of star types will form among the gassy, nebulous dust, but the brightest and hottest -- and hence most easily visible -- are also the bluest, which burn through their fuel the fastest, and are the shortest lived. 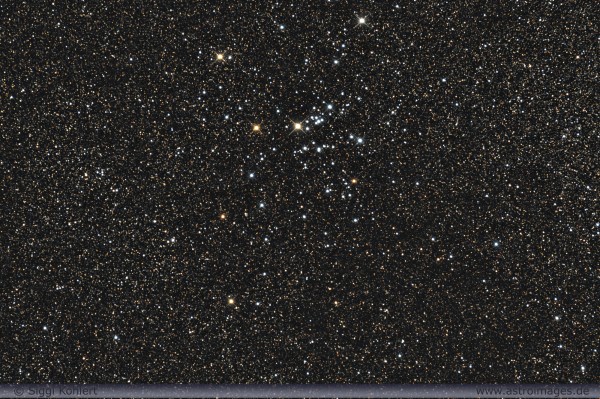 So what you're witnessing, when you look up at Messier 25, are dozens of bright blue stars burning through their nuclear fuel, at rates that are scores-to-thousands of times as quick as our own Sun burns through our star's hydrogen. The two whitish-yellow stars? Those have already run out of hydrogen in their core, and are currently in the giant phase of their lives, where they'll (relatively quickly) burn through their core materials and eject their outer layers, dying in a spectacular planetary nebula/white dwarf combination. (The two bright red stars? Don't be fooled; they're line-of-sight imposters!) The cluster surely contains dimmer stars in there, too, that simply require a more advanced telescope/imaging system to see.

A modest 19 light-years across, there are 601 known stars in there, which is seven times as many as were known just 50 years ago! It would be unsurprising if, as our instruments improve, we found that there are literally thousands of stars inhabiting this cluster. And, of course -- although not every image showcases this -- there's the dust as well. 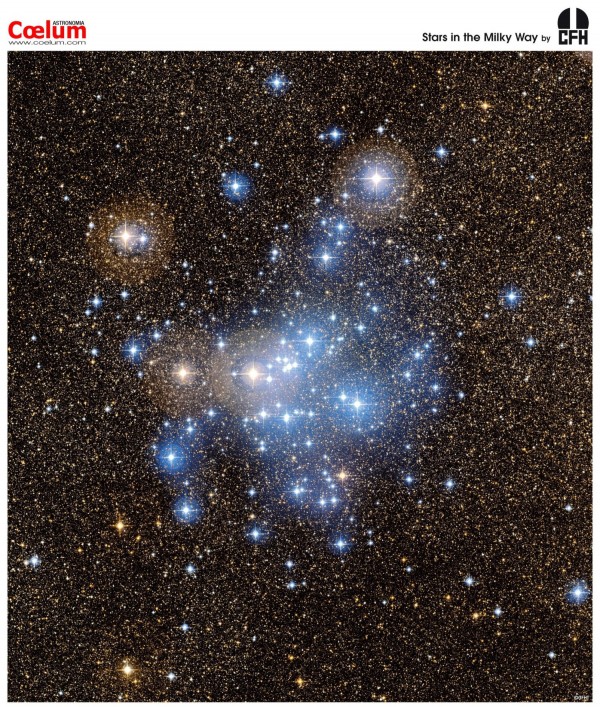 This is the most sophisticated astrophoto ever taken of Messier 25, with the 3.5-meter Canada-France-Hawaii Telescope! The intense ultraviolet radiation is presently causing the leftover dust to evaporate at an extraordinary rate, so much so that the passage of another few million years should cause all of it to disappear!

The central region of this cluster is remarkable for the bright, blue stars all packed together in there, along with some dimmer ones that the CFHT image uncovers. 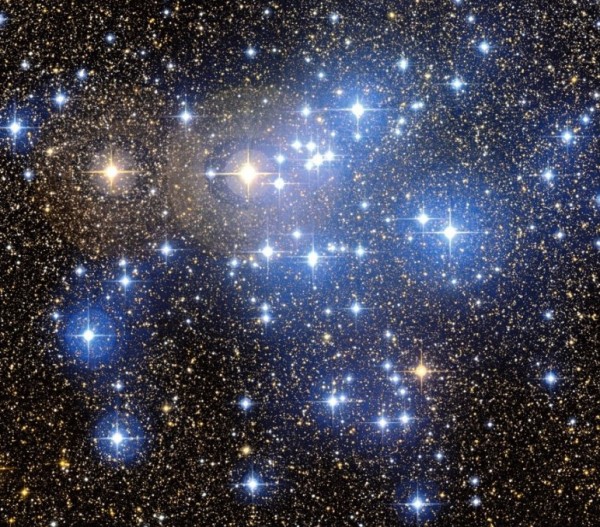 But even though that may be the most detailed image of M25 ever taken, it's not the most spectacular to me.

Amazingly, just last summer, the (former planet) Pluto passed by this Messier object, and in a spectacular series of astrophotos, Emil Ivanov captured this once-in-a-lifetime event! 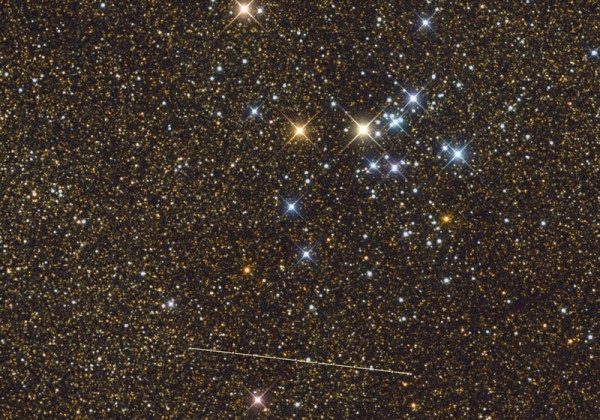 Pluto! You can see where it is tonight in the 4th image if you scroll back up; about 2.5° away from M25, it won't pass by another Messier object for many years. How amazing that this image is preserved for all eternity; it's a sheer joy to be able to share it with you!

Including today, we’ve taken a look at the following Messier objects:

Come back next week, where we'll look out of the plane of the galaxy and treat you to a real, deep-sky spectacle, only here for another Messier Monday!

Ethan, You said the Cluster has "..dozens of bright blue stars burning through their nuclear fuel, at rates that are scores-to-thousands of times as quick as our own Sun burns through our star’s hydrogen." That means some have lifetimes of only a few million years - so, is the 90,000,000-year-old cluster still cooking up new stars?

"Thousands of times faster than our sun" would give our sun a lifetime of some 10 million years.