"If you pick up a starving dog and make him prosperous he will not bite you. This is the principal difference between a dog and man." -Mark Twain

While it's hard to imagine for me now that I have one, there are plenty of people out there who have never known the rewards and joys that come with rescuing an animal. This week, I present to you a song by six future Soundgarden-and-Pearl Jam members back when they were part of the band Temple of the Dog,

Call Me a Dog.

And while there are many internet jokes out there about dogs driving cars... 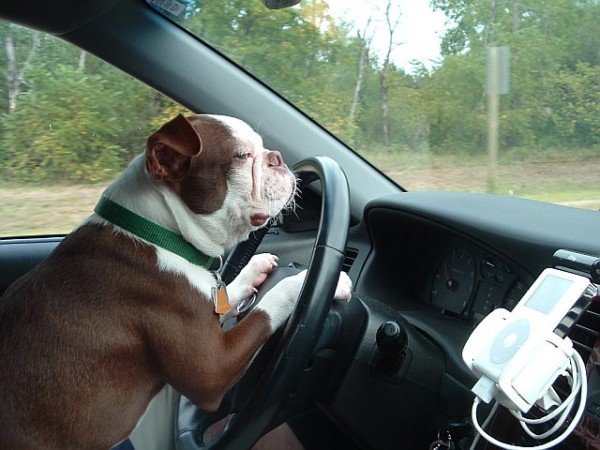 ...this is about to become a reality.

Because while the dogs above are not really driving their cars, the dog below, named Ginny, is. 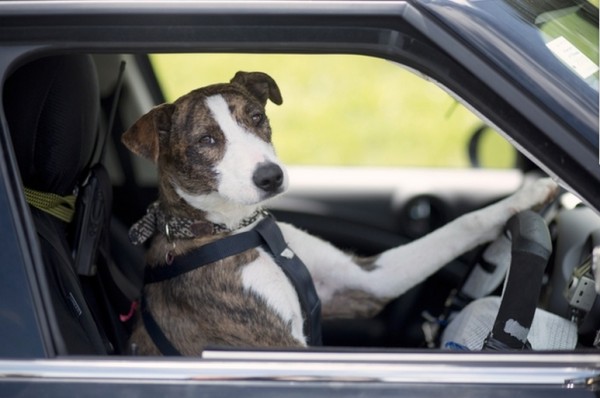 This is no joke: dogs are being trained to drive cars for real. New Zealand's Society for the Prevention of Cruelty to Animals (SPCA) has spent seven weeks working with and training different three of their rescue dogs to teach them to drive. The hope is that by demonstrating the remarkable intelligence and capabilities of rescue dogs, they'll do a better job securing good homes for rescue dogs, particularly the older ones that are wanted less frequently. 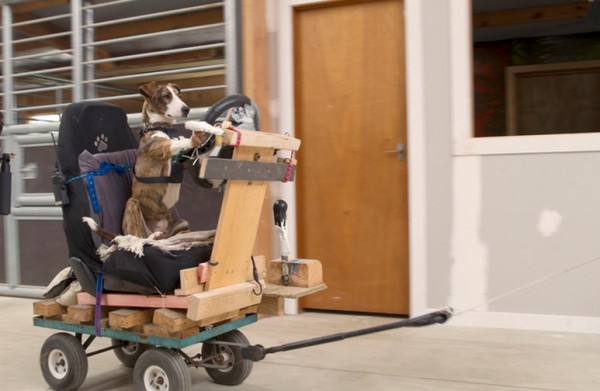 The three dogs chosen for this task were Monty, an 18-month-old schnauzer who was given up by his owner who deemed him "uncontrollable," Ginny (in the photos above and below), a one-year-old whippet mix who was rescued from abusive owners, and Porter, a ten-month-old bearded collie mix, who was found in the streets after being abandoned.

The remarkable thing is that, with just a little bit of training and positive reinforcement, all of these dogs were able to learn an increasingly complex chain of commands, culminating in being able to control a motor vehicle. 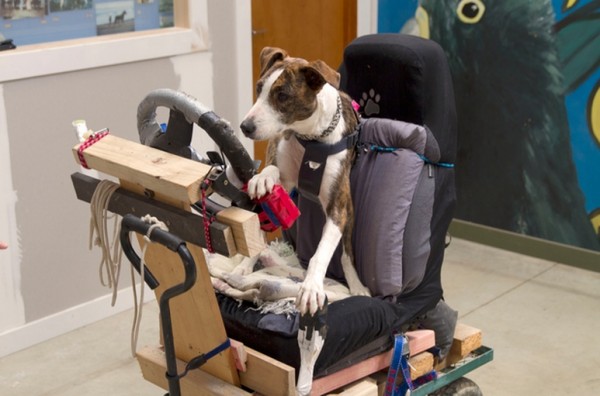 A television program that highlights these dogs will air on New Zealand television this coming week. The CEO of SPCA Auckland, Christine Kalin, had the following to say:

I think sometimes people think because they're getting an animal that's been abandoned that somehow it's a second-class animal.

Driving a car actively demonstrates to potential rescue dog adopters that you can teach an old dog new tricks. The dogs have achieved amazing things in eight short weeks of training, which really shows with the right environment just how much potential all dogs from the SPCA have as family pets.

The dogs were trained to not only steer, but to start a car, accelerate, brake, and shift gears as needed. 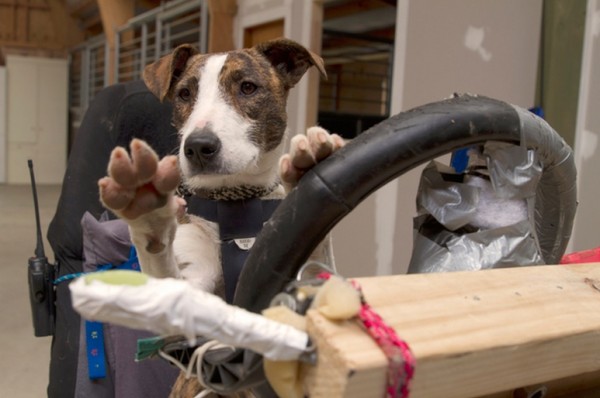 You might think I'm either exaggerating or pulling your leg, but I assure you that this is not the case. Yes, there are plenty of genuine write-ups (and pictures) of this story, but perhaps the following two videos will demonstrate to you just how impressive this actually is. (Warning: both videos have an advertisement preceding them.)

Not only were these three dogs trained to drive a car, these were merely the three best out of seven dogs that successfully learned to drive! Their trainer, Vette, had the following to say:

Monty, Porter and Ginny are great dogs each with their own distinct personality. You wouldn't believe any dog could learn to drive a car on its own and the way all three SPCA rescue dogs have taken to training really does prove that intelligent creatures adapt to the situation they're in. It really is remarkable.

Yes, yes it is. Watch the full story (so far) here. Have a great rest-of-your-weekend, and if you're considering getting a pet for your children, a loved one or just for yourself, please strongly consider getting a rescue animal. There's nothing like it in the world.

Yes, I'm a driving dog. My owner is blind. One day he walks out of the store and into the parking lot. He grabs me by the tail and starts swinging me around over his head. A surprised policeman politely asked my owner, "Are you hurting that dog?" My owner answers, “Not at all, he's just looking for his car."

You know this is just going to backfire in their face when amongst all the very well-behaved and wonderful rescue animals there's the one bad seed who uses his training to perform the first canine car jacking.

Yes, I'm a dog; but I'm not dumb. So my owner thinks that I'm sleeping and says to his wife. "I think we've got to get Driving Dog neutered." Now why would any male say that about another male animal. I don't complain about drinking from the toilet, or when he swings me by my tail. But neutered, even a dog's draws a line.

So it's back on the street for me again. There is no ASPCA for me; their religion is neuter and spay.

Well at least Blind Man had me trained to drive a car. He doesn't need his car anyway.

Yeah Blind Man also had me trained to use his computer too. He introduced me to astronomy; except for the moon, I just don't get it. If he had a laptop computer or an ipad; I'd take that too.

So you won't be hearing from me for a while. I'm on a roadtrip to California. Hope to find a good bitch along the way. We'll howl the moon.

I'm curious, do those dogs actually get that they are steering the vehicle, or are they just obeying commands? That is, if the dog were left up to it's own devices, would it be able to navigate to some destination on its own without further coaching on every single turn?

Dark Jaguar is proof that dogs are smarter than cats.
Cats just can't comprehend cars and should never be allowed to drive.

The bitch next door is coming to California as long as we stop in Vegas. HOWL!!!

I really wanted to keep a low profile; but she's a Poodle with Papers and wants a bugatti.

Yelp, I'm keeping my seeing-eye dogtag as a backup plan.

Of course CB. How could anyone forget Toonsis the driving cat?