"This holiday season is about remembering that the greatest gift was not laid under a tree, but in a filthy manger." -Unknown

But it isn't the manger you're thinking of that I want to share with you this Messier Monday. Although Charles Messier's catalogue of 110 deep sky objects -- designed to pinpoint nebulae that could possibly be confused for potential comets -- is composed mostly of objects only visible through a telescope, a few of them are visible under good seeing conditions to the naked eye, and have been known since ancient times. 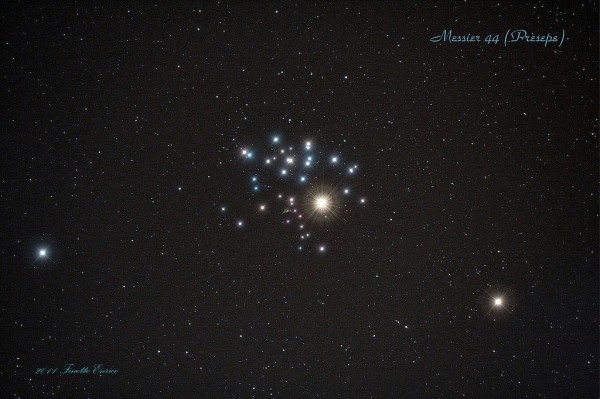 High overhead at midnight tonight, Messier 44 -- known as the Beehive Cluster today -- was known as Praesepe, the manger, to the ancient Greeks and Romans. The bright star cluster at the center is M44 itself and was seen to be the manger, with the two brightest stars external to it, Asellus Borealis and Asellus Australis, as the two mythological donkeys (eating from the manger) that Dionysus and Silenus rode into battle against the Titans.

And this bright star cluster -- just five-to-six hundred light-years away -- can be viewed anytime after about 9 or 10 PM tonight. 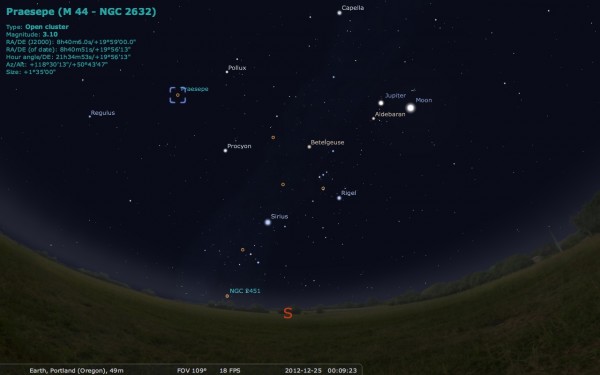 A little northeast of the great constellation Orion, you'll find a bright isoceles triangle consisting of the three bright stars Procyon, Pollux, and Regulus, which are the 7th, 17th and 22nd brightest stars in the sky, with Praesepe located just inside the Regulus-Pollux side.

Four naked-eye stars, including the two donkeys, surround the Beehive cluster, which appears cloud-like to someone with dark skies and imperfect vision but can easily be resolved into many individual stars with even the most primitive of equipment. 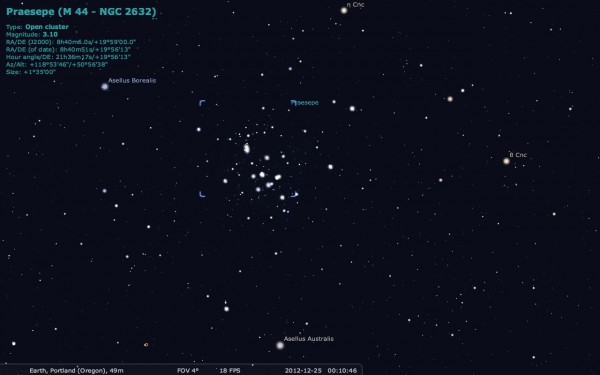 Image credit: me, with Stellarium again.

Unlike many deep-sky objects, which are better viewed with large-aperture telescopes, Praesepe is best seen through either binoculars or a small telescope. At about a degree-and-a-half in diameter, larger telescopes inevitably miss the big picture.

And the big picture is spectacular. 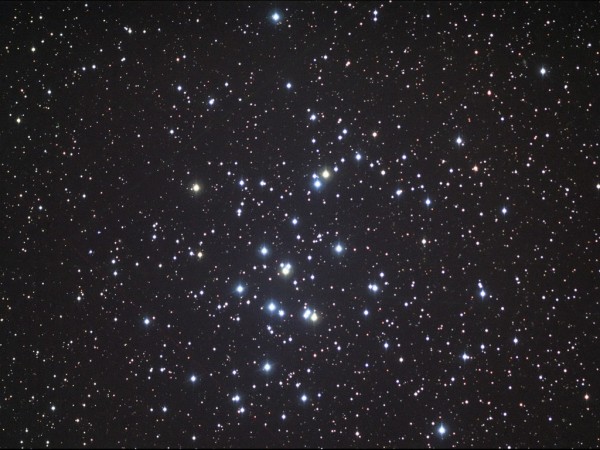 There are around 1,000 stars in this manger/beehive, with the brightest and most massive found near the center. About 300 of these stars are Sun-like, just under 700 are red dwarfs, and the brightest 20-or-so are bright blue A-type stars. Remember, it's the brightest, most massive stars that burn through their fuel the fastest. So if you're wondering, "what about those big, bright orange stars you see, above?" Oh, they're real, and they're spectacular. (Click the image, below, if you don't believe me.) 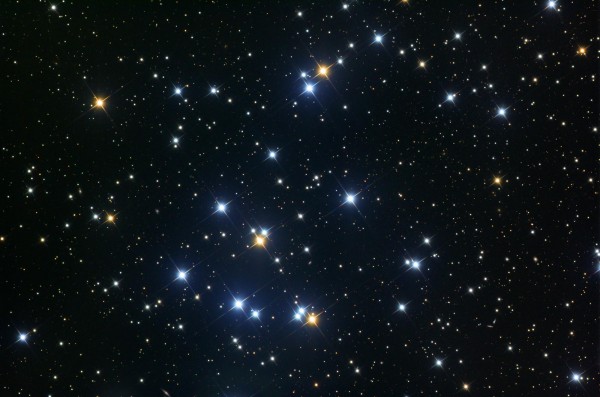 Those orange giants are the most massive stars left in the cluster, having already entered the red giant phase of their life -- the final phase for all stars between about 40% and 400% the mass of our Sun -- before blowing off their outer layers and contracting down to a white dwarf.

Based on the stars left in this cluster and the white dwarfs we've already found in there, we can confirm that the Beehive cluster is perhaps just over 600 million years old. 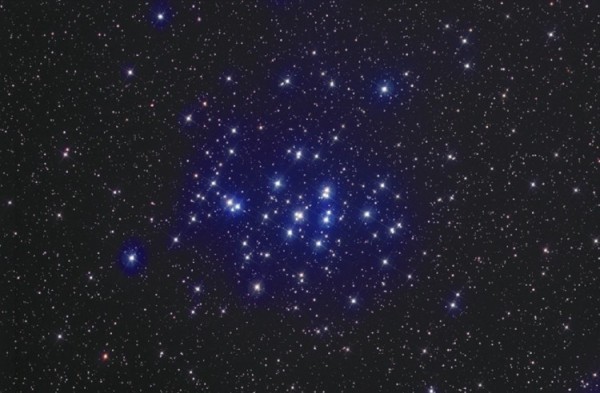 Unlike many clusters this old, Praesepe is still huge, and still has a small amount of dust/nebulosity around it, as Mike Sherick's astrophoto reveals. The Beehive cluster also has the distinction of becoming the first star cluster to have had extra-solar planets discovered in it around Sun-like stars!

But there's something a little suspicious about the Beehive cluster, just over 600 million years old, based on its position and motion through the sky. If we extrapolate backwards in time, it looks like it came from the exact same location as another star cluster visible to the naked eye: the Hyades! 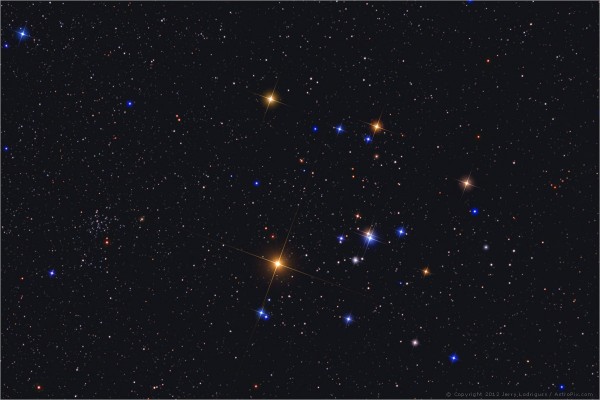 In fact, the Hyades is the closest star cluster to our Sun, and is suspiciously estimated to be about 625 million years old. Only, the Hyades is pretty clearly in the process of dissociating, has no dust or nebulosity, and its trajectory originates from the same point as the Beehive Cluster! Could these have once been part of an even larger, more spectacular star cluster in the past?

Most probably. This is what star clusters do and how they evolve: dissociating either all at once or in large chunks, depending on how gravitational evolution works. It's uncommon to find star clusters as dense and massive as Praesepe, but it only starts to get suspiciously rare when they hit a billion years in age; we're not there yet. 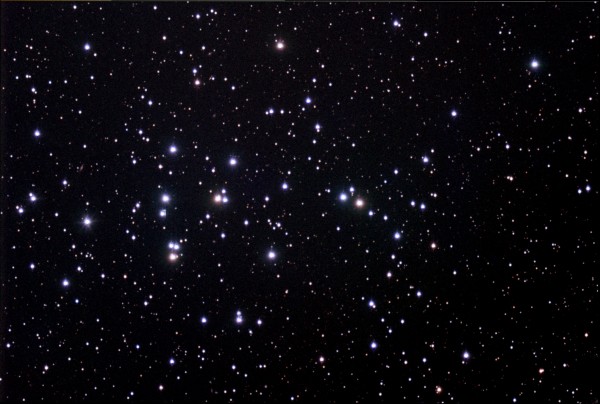 You can enjoy this Messier object all winter long and well into the spring; Praesepe will be visible just after sunset starting in February, but if you're out Santa-hunting tonight at midnight, don't forget to look up and see the original cosmic manger!

After all, the Sloan Digital Sky Survey did, and look at the composite image they turned up of Praesepe's core! 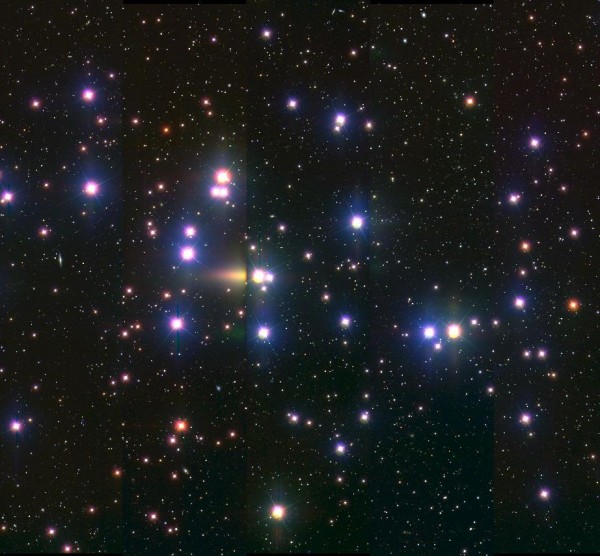 Even for the holiday season, I couldn't deprive you of another spectacular Messier Monday! Enjoy the Beehive Cluster, and don't forget to take a look back at all our previous Messier Mondays:

Which Messier object will be highlighted next? Let’s hear which one you want, and I’ll make it happen. Happy Messier Monday!

Thanks! Working this Christmas shift is lessened by this awesome post!

I just today (31 March) discovered your post. Your directions and star map are superb! I followed your directions and in no time had M44 sighted in my 15x70 binoculars. A truly stunning view. Thanks so much for your excellent work Ethan.

I photographed the Praesepe with a Canon Powershot camera, 15 second exposure which I deconvoluted, then looked at your page to compare.

It seems that the Sloan Digital Sky Survey picture is mirror-reflected compared, not only with what I took, but all the other pictures in this page.

With such light pollution, photography is such a help.

Most astronomy photographs will be through a telescope, meaning they will be back to front and upside down if Newtonian in configuration, or upside down if there's a star diagonal.

Your digital camera has a pentaprism mechanism for viewing and views things turned round twice to give right-way-up-and-round.

And the output will be configured to read the same way too.

Astrophotographs will be put up in the "natural" viewpoint of the person looking through a telescope.

Sir im so interested in m44 can u help me about my research in beehive cluster.. what is the good research about beehive also known m44 please reply ASAP

A long, lengthy trail has led me here. Do you know why?