Messier Monday: A Star Cluster on the Bubble, M52

"Look within. Within is the fountain of good, and it will forever bubble up, if forever you dig." -Marcus Aurelius

Welcome back to yet another Messier Monday! Each week, we're taking a look at one of the 110 fixed, deep-sky objects -- not to be confused with comets -- that made up Messier's original catalogue. 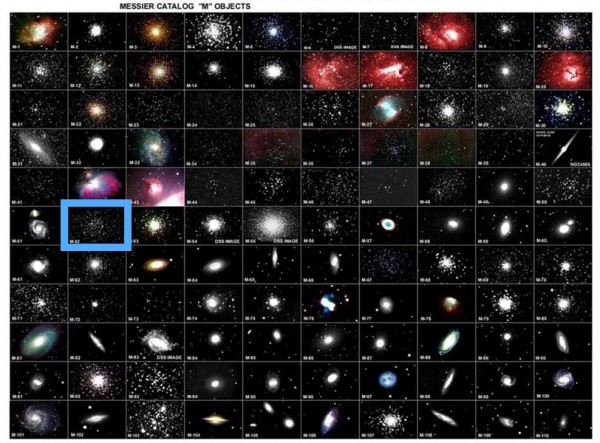 Today, we're going to take a look at Messier 52, one of the 33 open star clusters in Messier's catalogue, which happens to be right on the edge of the Milky Way galaxy. It's one of the easiest Messier objects to find, as to get there, all you need to do is find the easily-identifiable constellation, Cassiopeia. 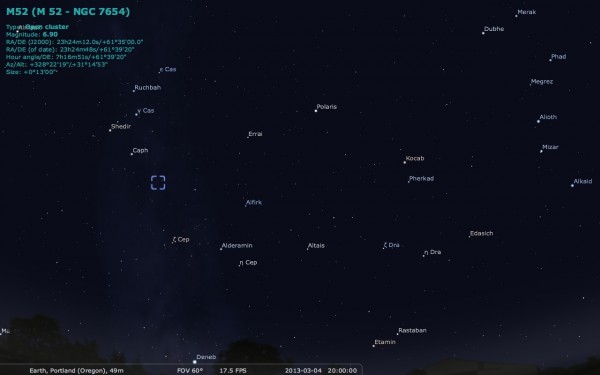 From the side of the "W" that mirrors the Big Dipper's handle (rather than the cup), follow the last two stars -- Shedir and Caph -- just slightly more than the distance that separates them. And if you look through a small telescope or even a good pair of binoculars at the region marked by the blue box, above, here's what you're likely to see. 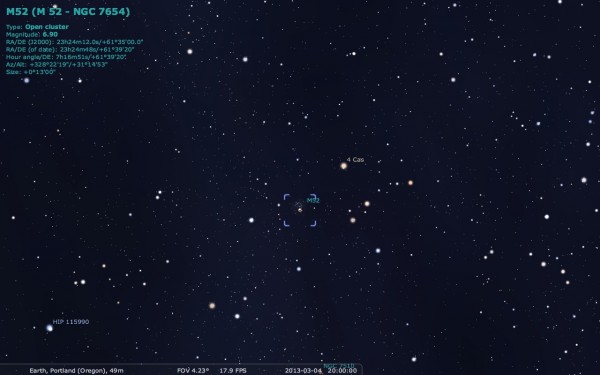 Amidst a sea of bright stars, varying in color from red-to-blue, you'll find a small, faint cloud that's actually a cluster of stars, thousands of light years away. 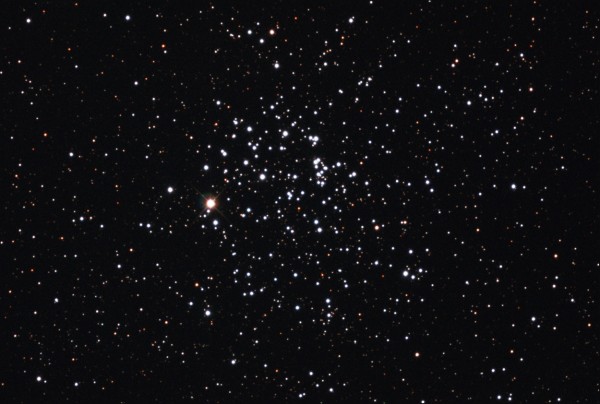 How many thousands of light years? I wish I could tell you.

No, it's not because I'm too lazy to go figure it out, it's because this cluster is in the plane of the Milky Way. This is in contrast to the other Messier star clusters we've looked at, and so our methods of determining distance are too uncertain! Some methods of estimating distance return a value as small as 3,000 light years, while others are as large as 7,000! But there are some things about this cluster that are well-known. 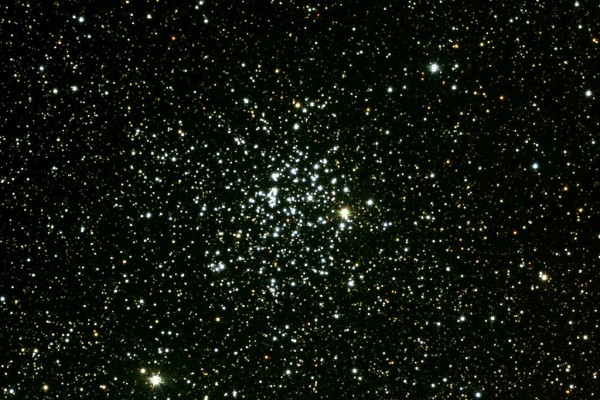 There are a few yellow-ish colored stars that you can see; these are giant stars in the last stages of their life, poised to become planetary nebulae. Beyond that, most of the bright stars you can see are blue (there are many B-class stars in here), indicating that this cluster is on the young side of around 35 million years, which would make it even somewhat younger than the Pleiades!

It's a dense cluster, with more than 190 stars, and -- if we split the difference and assume a distance of 5,000 light-years -- is only some 19 light-years in diameter. The cluster is pretty compact, as it takes up less than a quarter of the area that the full Moon does. 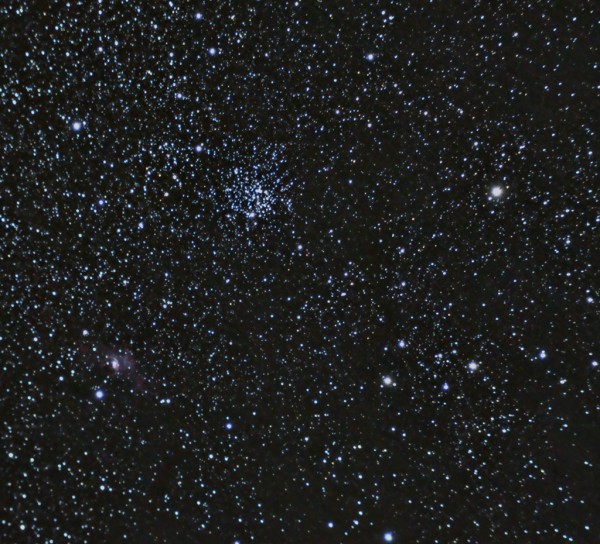 This cluster was a Messier original, discovered by Charles Messier himself back in 1774! But this wide-field image, above, showcases something that those of you who have the good fortune to look through a larger telescope might see: less than a single degree away from this star cluster is a nebulous extended object, visible in the lower-left of the image above.

What are you looking at? 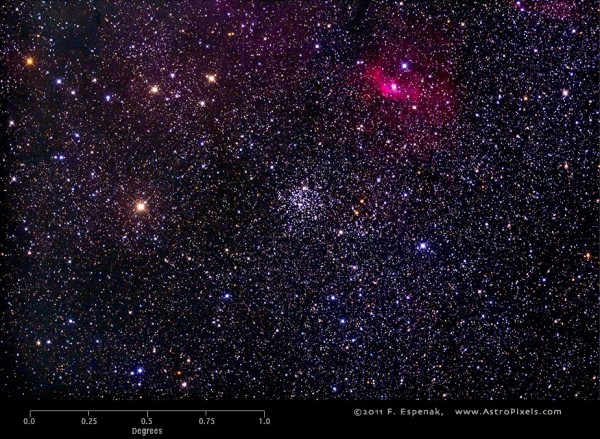 This is the Bubble Nebula, or NGC 7635, located just half-a-degree away from Messier 52! We often find star clusters and nebulae together, even overlapping, because it's when a large cloud of cool gas collapses that we form open star clusters in the first place!

But... that's not what's happening here! 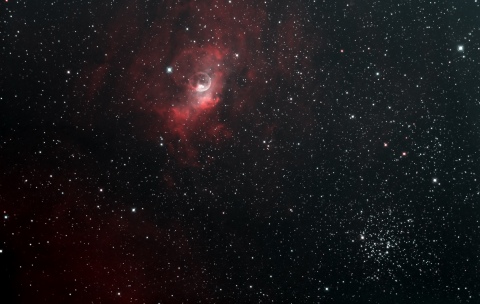 The stars in M52 are too old to still be connected to such a nebula, and the locations are simply off by too much. Even more telling, the Bubble Nebula is a shocking 11,000 light-years away, meaning that it's just as far away from Messier 52 as we are!

In other words, these are two distinct objects, completely unrelated to each other. It's only by coincidence that they're aligned in the sky. Which is too bad, because the Bubble Nebula looks amazing! 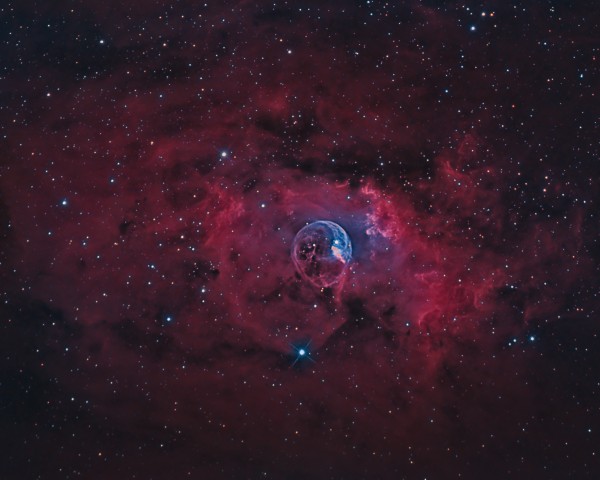 It's conceivable that -- some 33 million years ago -- Messier 52 looked just like this! The bright, blue star that causes the Bubble in there is a brilliant O-type star, but all of those have long since burned out (and gone supernovae) in Messier 52. 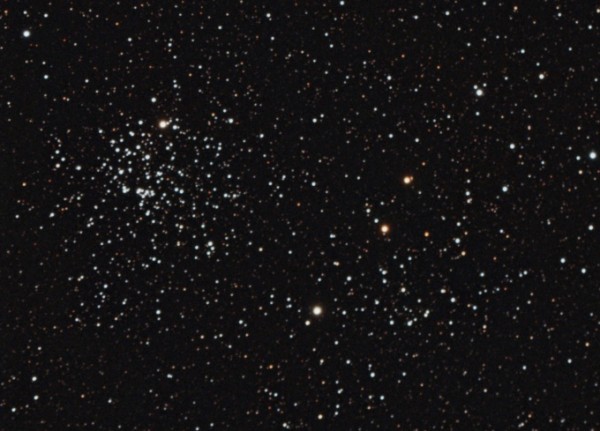 In fact, all the stars that die in a Type II supernovae have ended their life in Messier 52. All that's left are the stars that die in planetary nebulae (like our Sun) and the dwarfs. But even with all the distance-uncertainty thanks to its location in the plane of the galaxy, Messier 52 is still a treat, whether you see it on its own or with its spectacular, effervescent neighbor! 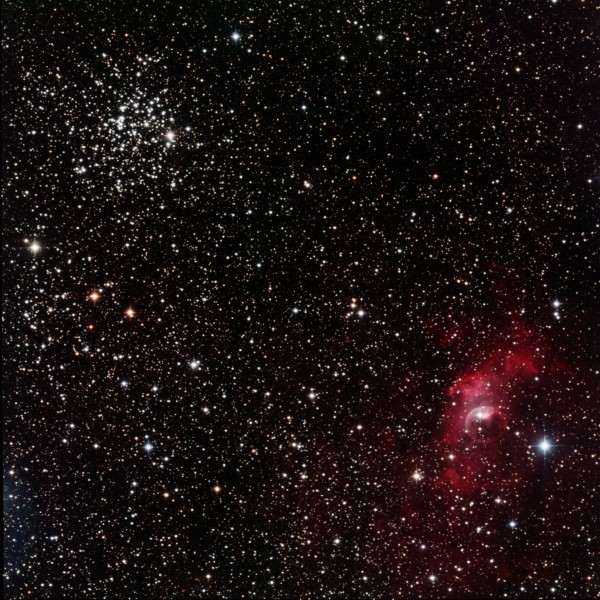 Hundreds of stars, millions of years old and thousands of light-years away, and that's what we consider a boring star cluster?! How fantastically spoiled we are!

Including today, we’ve taken a look at the following Messier objects:

Come back next week for another Messier Monday, where we'll talk about the famed Messier Marathon, and send you on your way by talking about the very first object you should look for!

I cited this post as a reference for my essay “Galaxy Gazing,” http://blog.edsuom.com/2016/07/galaxy-gazing.html