"It is the highest form of self-respect to admit our errors and mistakes and make amends for them. To make a mistake is only an error in judgment, but to adhere to it when it is discovered shows infirmity of character." -Dale Turner

This April Fools' day, even though the rest of the internet revels in trickery, happens to fall on a Monday. Over here at Starts With A Bang, that means it's time for Messier Monday, an in-depth look at one of the 110 deep-sky objects catalogued by Charles Messier in the 18th Century to help comet-hunters avoid confusion. Today, the catalogue boasts 107 spectacular deep-sky clusters, nebulae and galaxies of various sorts, as well as three -- to be polite -- curiosities. 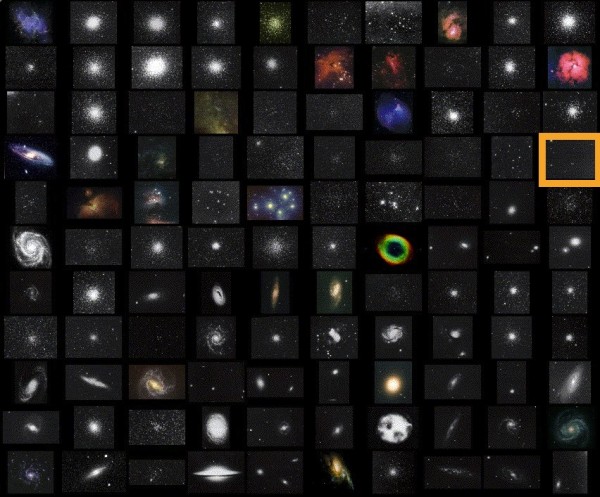 Today, for April Fools' day, we'll take a look at the most foolish of all 110 objects in the Messier catalogue, an object that could not possibly, conceivably ever be mistaken for a comet: Messier 40, a mere double star in the sky. You may wonder, amidst hundreds of extended objects, open clusters, globular clusters, spirals and more, how such an obvious blunder could make it in? Well, I'll tell you. But first, here's how to find it for yourself. 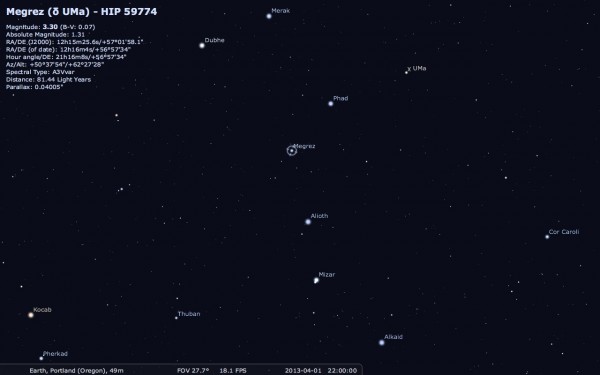 The Big Dipper is an asterism -- a configuration of stars in the sky -- that you're all familiar with. Along with Orion and the Summer Triangle, it's one of my favorite starting points for finding deep-sky objects. To find M40, you don't need to wander very far. Simply take a good look at Megrez, the bright star where the dipper's handle connects to the cup, and look slightly above (or north of) the star itself. 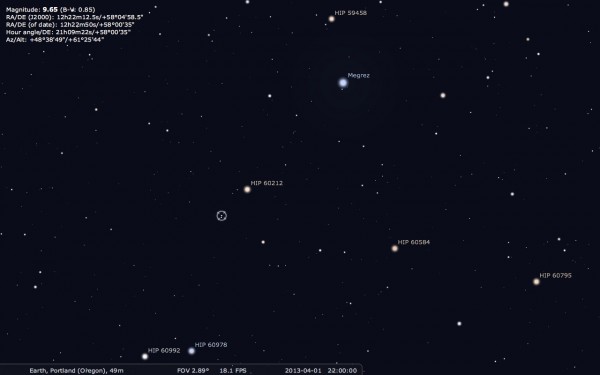 There are a few bright-ish stars near 3rd-magnitude Megrez, denoted by their Hipparcos catalog numbers, above. And near the just-barely-naked-eye star, HIP 60212, a little farther away from Megrez, are two faint stars, very close together in the sky. 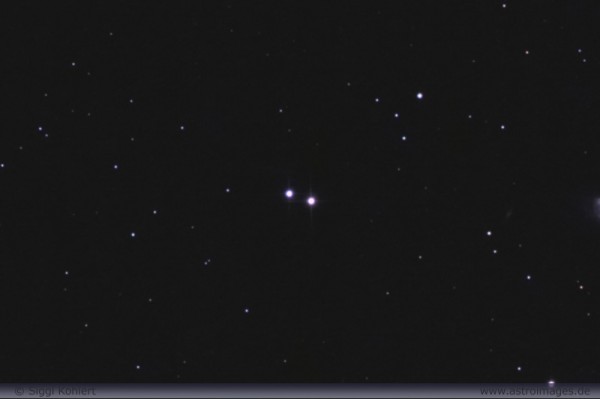 It's just a double star, nothing more than that. It's somewhat remarkable because of how close these two stars are to one another, as they're separated by less than one arc-minute (one sixtieth of a degree) on the sky. And it's the most obvious mistake in the Messier catalogue, as no one in their right mind would confuse this with a comet. 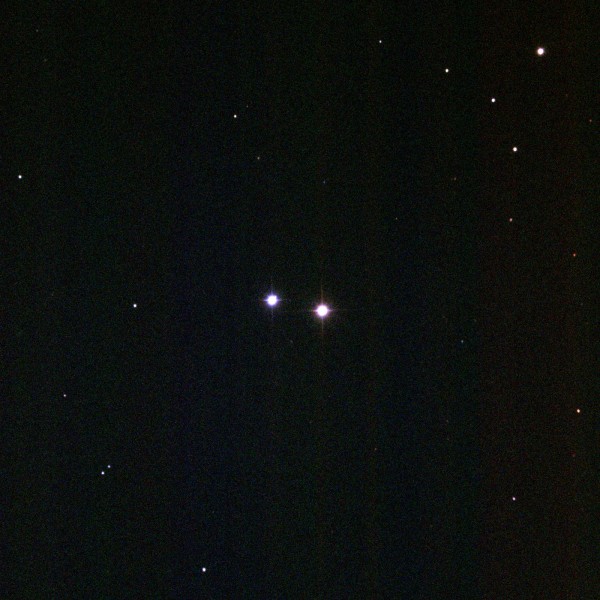 Not in the visible, which is what all telescopes were back in Messier's day, nor in the infrared, as the 2-micron All-Sky-Survey shows, below. 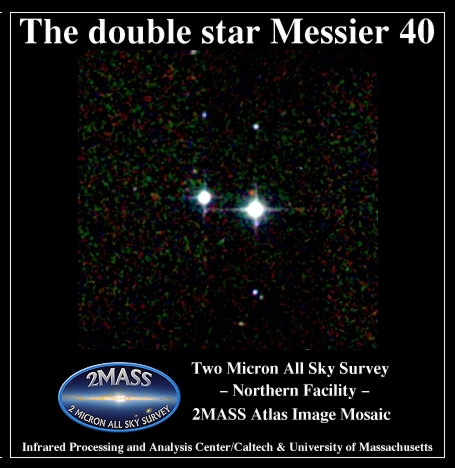 And yet, Messier included this object as the 40th one in his catalogue. What gives?

The story goes back 100 years before Messier, to the famed 17th Century astronomer, Johannes Hevelius. 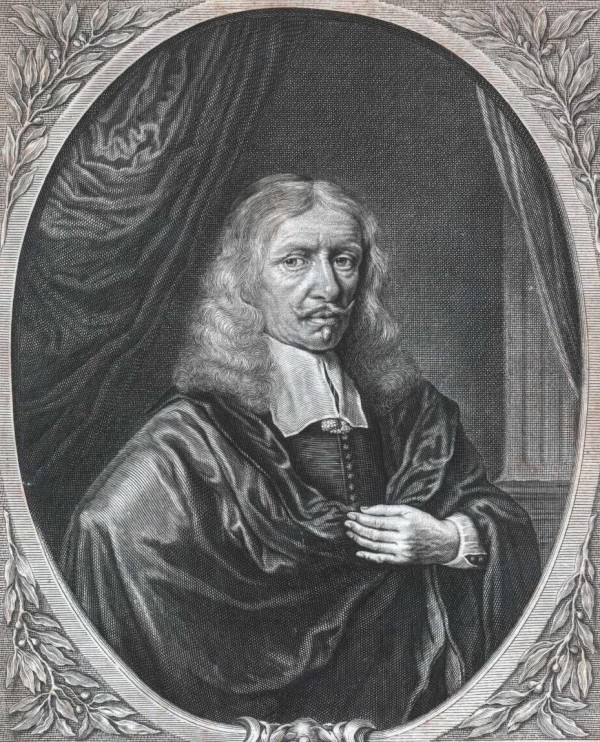 Hevelius discovered numerous comets, was the last naked-eye astronomer to make significant contributions to the field, became the first noted lunar topographer and measured the longitudinal libration of the Moon. He -- along with many other astronomers before Messier's time -- had compiled a list of extended, deep-sky objects to steer potential comet-hunters clear of such patches in the sky.

But you haven't heard of the Hevelius catalogue, or any other astronomical catalogues of deep-sky objects that predate Messier's. There's a good reason for that; Messier's objects actually exist, and they actually exist where he said they are! 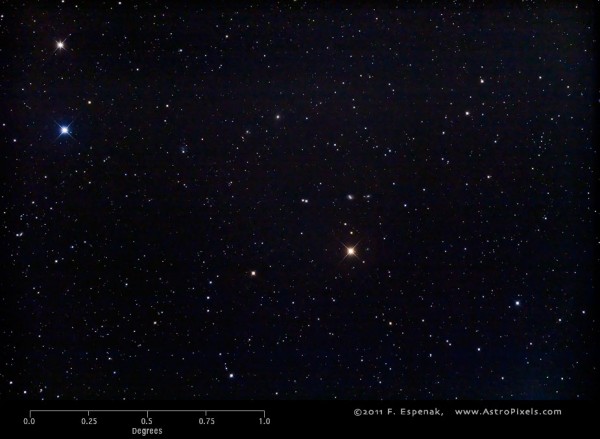 That's why Messier 40 is such a bummer. There were many objects that were in previous catalogues that turned out to be spurious, and Messier chose not to include them in his 18th Century compendium. And yet, when he came across Hevelius' cataloguing of this object from 1660, he made his own observations, and wrote the following:

The same night of October 24 to 25 [in 1764], I searched for the nebula above the tail of the Great Bear, which is indicated in the book Figure of the Stars, second edition... I have found, by means of this position, two stars very near to each other and of equal brightness, about the 9th magnitude, placed at the beginning of the tail of Ursa Major: one has difficulty to distinguish them with an ordinary [nonachromatic] refractor of 6 feet... There is reason to presume that Hevelius mistook these two stars for a nebula.

In other words, Messier knew that there were no nebulae there, and yet recorded this "object" anyway! 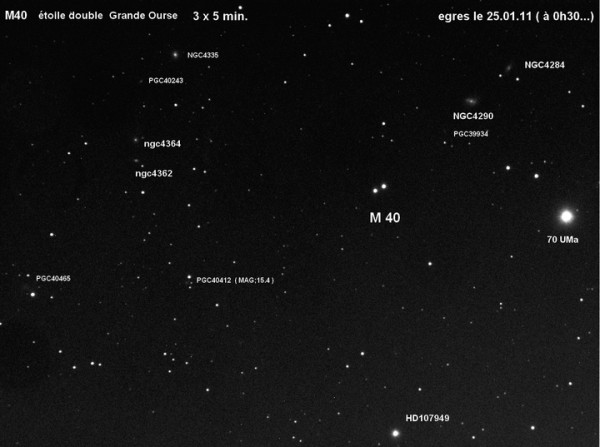 And yet, if there were a much more powerful telescope at Messier's disposal, he might have found that there were, in fact, a slew of deep-sky objects within half-a-degree of this double star! 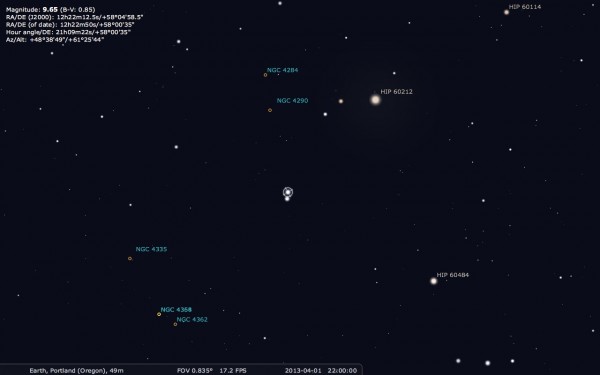 In fact, just a few years later -- in 1789 -- William Herschel would discover a pair of spiral galaxies that formed an equilateral triangle with Messier 40 and HIP 60212: NGCs 4290 and 4284. (There's a smaller, third galaxy there, too, that wouldn't be discovered until much later.) 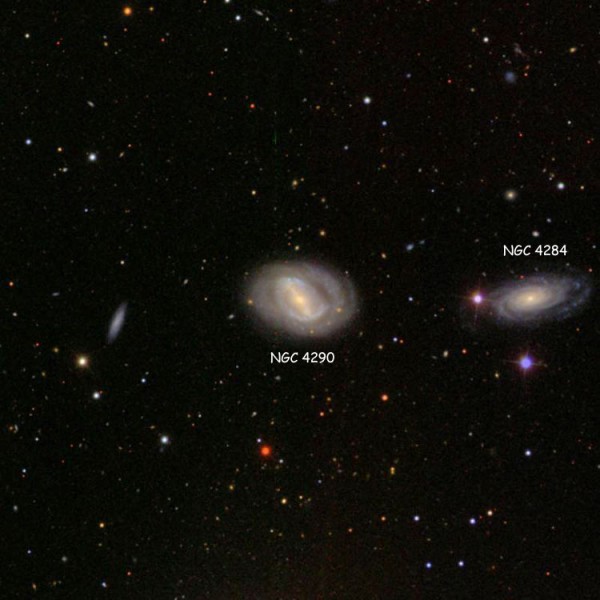 And if someone had continued the line from HIP 60212 to Messier 40 and beyond, they would have found four more spectacular galaxies in roughly a straight line, with William Herschel once again discovering the three bright "NGC" ones in 1789. 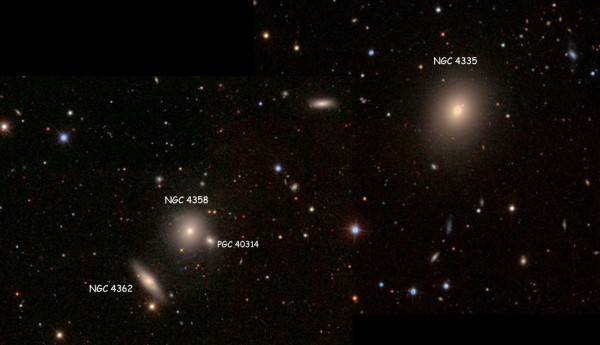 Images credit: Courtney Seligman of http://cseligman.com/, stitching by me.

But this is Messier Monday, not NGC-never-gonna-complete-it (with 7,840 objects), and so this April Fools' Day, now you've learned all about the most foolish of all Messier's entries, M40! Including today, we've taken a look at the following Messier objects:

Come back next week, where we’ll learn about a real deep-sky object here, on another Messier Monday!

"In the depth of winter I finally learned that there was in me an invincible summer." -Albert Camus Welcome back to another Messier Monday, only here on Starts With A Bang! The first accurate, large catalogue of fixed, deep-sky objects, Messier's 110-object-strong catalogue features galaxies,…

"The image is more than an idea. It is a vortex or cluster of fused ideas and is endowed with energy." -Ezra Pound It's time for another Messier Monday, where we profile one of the 110 deep-sky objects that make up the Messier catalogue! This was the first large, accurate catalogue of fixed, non-…

"Do not look at stars as bright spots only. Try to take in the vastness of the universe." -Maria Mitchell It's time again for Messier Monday, where we highlight the various wonderous deep-sky objects of the night, and show you how to find them against the expansive backdrop of stars. The (almost)…

“God put me on this earth to accomplish a certain number of things. Right now I am so far behind that I will never die.” -Bill Watterson Welcome back to another Messier Monday, only here on Starts With A Bang! With each new Monday, we take an in-depth look at a prominently visible random object…

Hurry up already and do an article on M87 :)

It wasn't a mistake. Like you say, it was even noted as being a double before writing down. I get the feeling that he either had a soft spot for Hevelius. Maybe his funder did.

There are more "absolutely could not be confused for a comet" markings in the catalogue, so I rather suspect he put these in because he kept getting people asking him to put them in. It would be one way to shut them up...

Ethan, you do have a talent -- you can even make a pretty ordinary double star seem interesting. Thanks for Messier Mondays!