"If I see a spider in my house, I put it in a cup, and then I take it outside. I save it. What is wrong with me?" -Jacqueline Emerson

There's something not only incredibly useful but also beautiful about the intricate structure of a spider web. It's such a universally admired phenomenon that it's become a metaphor for many other things, as Welbilt sings you in their song,

Dependent on the type of spider and various environmental factors, the web can take on any number of beautiful shapes. 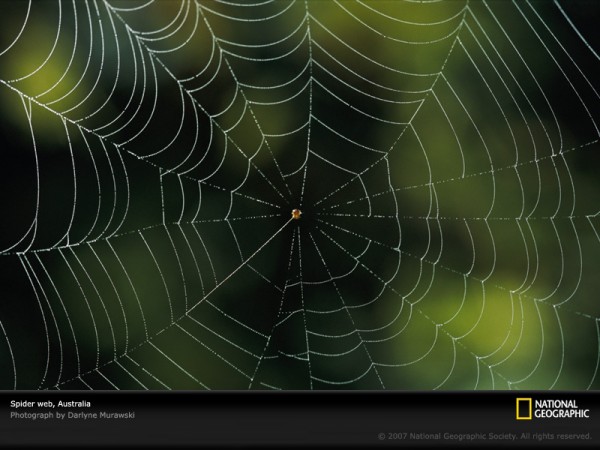 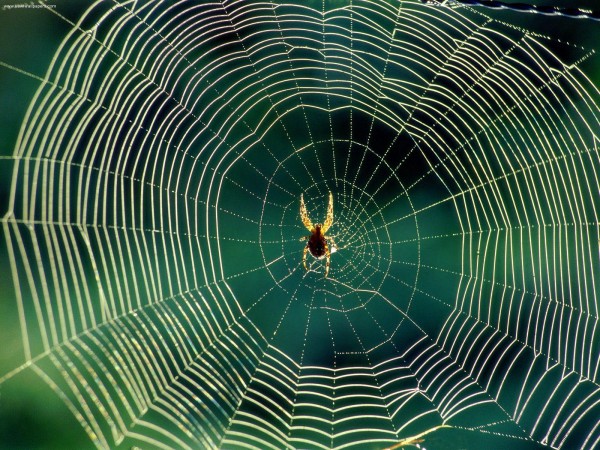 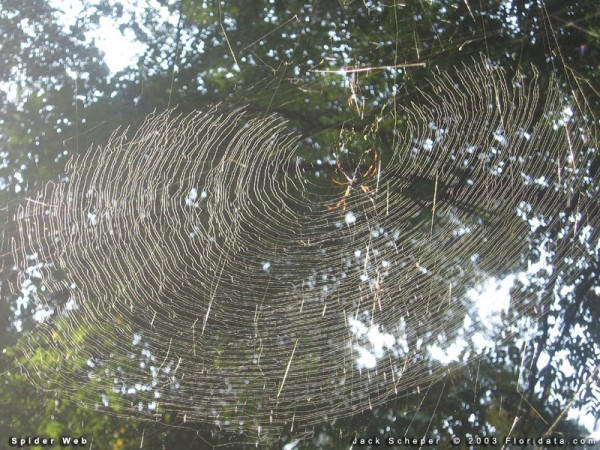 But all of that can change in a heartbeat, dependent on... how you drug the spider. 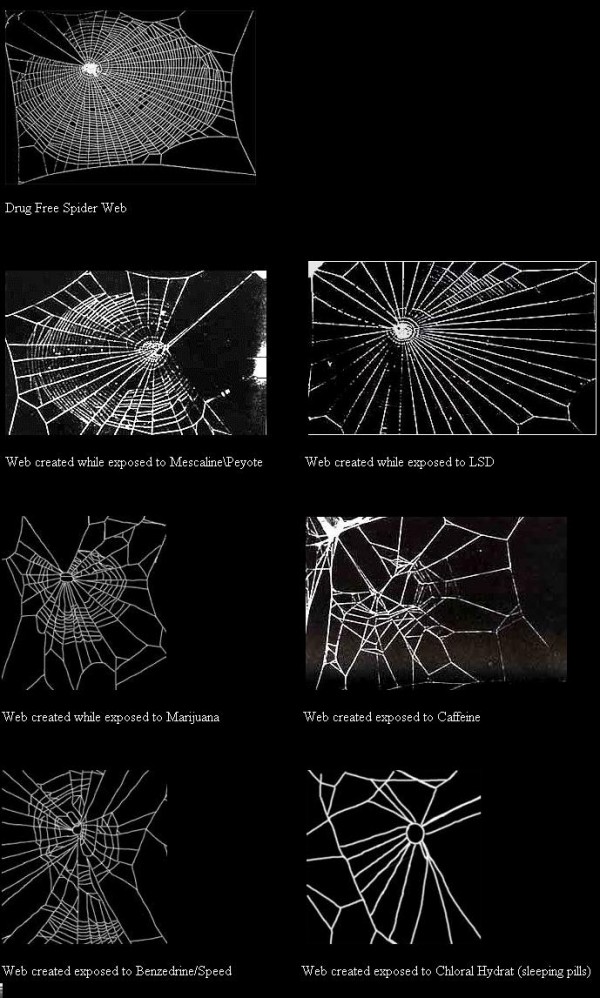 The size and shape of the web that spiders build, as first determined by P.N. Witt in 1948, is severely affected by psychoactive drugs, including amphetamine, mescaline, strychnine, LSD and caffeine. 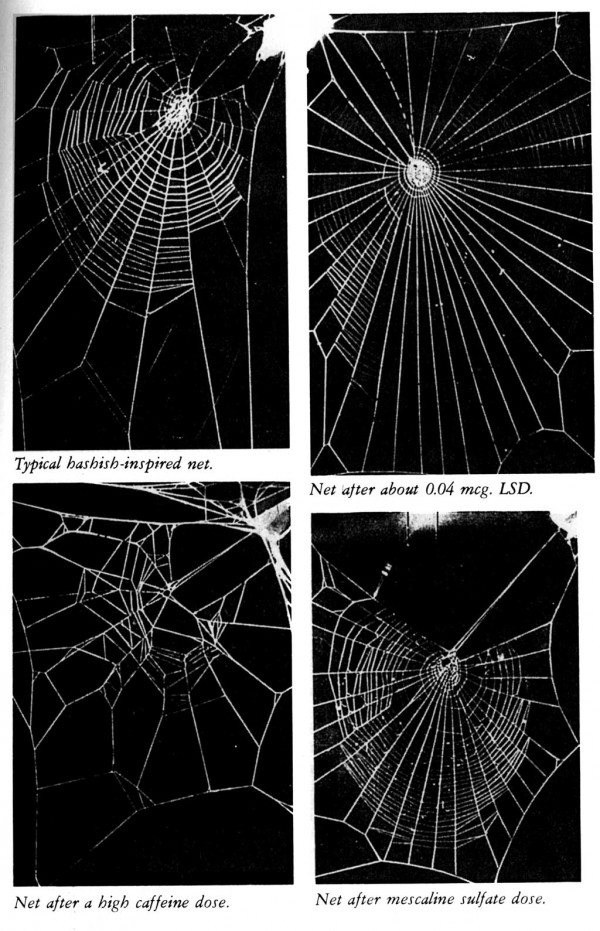 Wish I knew the source for this; part of the hazards of picking up an image from tumblr!

More recently, a group of NASA scientists studied the effects of a few different drugs on European garden spiders, where they discovered that they could use the spiders (and their webs) for quantitative drug detection tests! 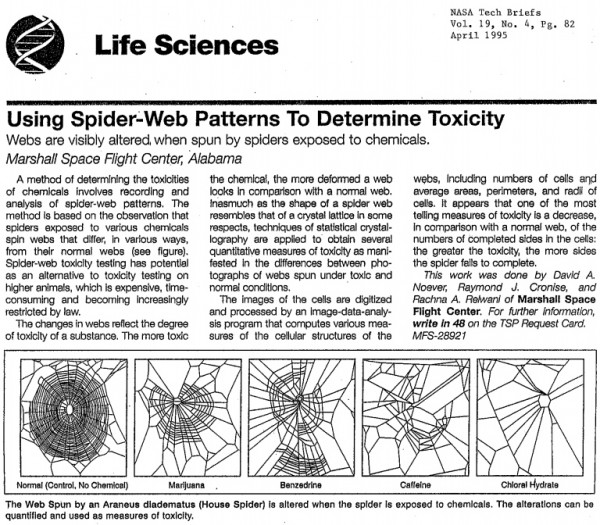 Finally, a video was made lampooning this research, and it's just... well, you'll have to watch for yourself.

See you back here on Monday for some real, physical science, and hope you have a great weekend until then!
Tags
biology
Random Stuff
Video
Drugs
LSD
spider
spider web
web
webs

Looking at the images, it seems to me that mescaline is OK, LSD is bad news because the spider constructs only the radial supporting silk strands and forgets to put in the sticky threads - the reason for the web in the first place, and caffeine is extremely bad news.

I have a fridge magnet with 'Drink coffee. Do stupid things faster with more energy'.

Fascinating. I have known about spiders' extreme sensitivity to minute amounts of drugs since the 80's (never thought to share though). With that much sensitivity I would think web observation could be considered a potential tool for gauging environmental contaminants. I have always watched spider activity and viewed their contributions as positive. We never have insects in our house due to both our spiders and our cats (who will eat the spiders too). I was a bit surprised a few months back when I began to clean out the garage and discovered a considerable spider population consisting entirely of Brown Recluses. Luckily, like most spiders, they rarely ever bite a human and generally cannot open their chelicerae wide enough to piece skin.

THC spider didn't build a web, he built a hamock and watched the caffeine spider all day :D :D ahahahahaah

I notice that in many of the drug-dosed photos the images seemed to be a bit underexposed, or else the spider web's frame threads were significantly thinner than normal, especially compared to the radial threads. To my knowledge, some species of spiders are incapable of regulating silk thickness while others have an internal valve for control.

Every summer I am treated to the artful spinning of at least one or two large Orb Weaver spiders known as Black and Yellow Argiopes. They like to establish residence near a back porch or security light. As long as the webs do not block our necessary transits, my wife and I have enjoyed watching their activities as the summer progresses. Once I was treated to a two-hour mating ceremony complete with initial dance acrobatics, the consummation of the union, and then the inevitable consumption of the groom (he was way too small to protest). No webs to report on yet this year.

One thing this demonstrates are major differences in outcomes depending on the dose of the compound in question. It logically suggests the use of the Shulgin assay method or similar methods, whereby dose levels are escalated over a series of runs, starting with doses far below those that would be expected to have psychoactive effects at comparable ratios to body weight in humans.

For years I have been saying that sub-psychoactive doses of psychedelics will be found to have medically useful effects. This is supported by recent findings that Ketamine (a dissasociative anaesthetic that is psychedelic in sub-anaesthetic doses) is an effective and extremely rapid-acting antidepressant in sub-psychedelic doses. My hypothesis also appears supporable from the dose-response effects of spiders to LSD, whereby smaller doses produce improved performance.

Taking this to its logical conclusion, we will probably find doses of other compounds, for example caffiene, that produce improvements rather than decrements in spider web-making performance, and thereby find paths toward optimizing dosages for humans. For while it may make good news-drama to show deteriorated spiderwebs on TV, and it may make good office comedy to post the ones associated with caffiene over the office coffee-bong, progress in psychopharmacology depends on ascertaining the potential for medical benefits of any given compound.

(Spelling errors and other typos due to using a different browser than I usually do, on a smaller notebook screen.)

Definitely not due to any drugs, eh?

Watch out for that third cup of coffee!

I'd love to see the effect beer has on a spider's web. :)

Wow, people, really? Why would anyone find this even this even the slightest bit amusing??

That picture from Tumblr, of the four webs (hashish, LSD, caffeine, mescaline) is a page out of Peter Stafford's PSYCHEDELICS ENCYCLOPEDIA.
http://www.amazon.com/Psychedelics-Encyclopedia-Peter-Stafford/dp/09141…

DISCLAIMER: My copy is almost thirty years old; I haven't looked at any more current edition.