"There is an ancient saying among men that you cannot thoroughly understand the life of mortals before the man has died, then only can you call it good or bad." -Sophocles

Imagine looking up at the night sky -- able to survey the full depths of space -- with eyes the size of saucers instead of our paltry, few-millimeter-sized pupils. What do you suppose you'd see? Well, here on Messier Monday, we take a journey through the first catalogue to effectively do just that! Charles Messier catalogued, over many years in the late 18th Century, 110 deep-sky objects, each unique, and each telling its own tale. Each Monday, we highlight one of them in great detail. 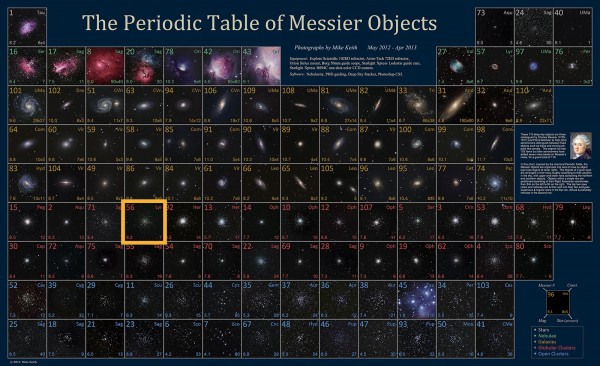 He was the original discoverer of a great many of these objects, including today's find, Messier 56. This is a globular cluster, which, to Messier in his modest (by today's standards) telescope, appeared as a

Nebula without stars, having little light.

Of course, we now know this is a collection of hundreds of thousands of stars, and quite possibly the oldest object in the entire Messier catalogue! Here's how to find it for yourself. 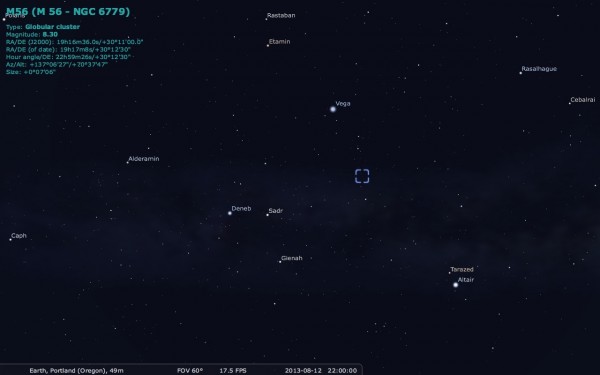 Flying high overhead all summer long, the Summer Triangle dominates the portion of the night sky directly overhead after sunset tonight. Composed of the three brilliant stars Altair, Deneb and Vega, it's been a familiar sight to enthusiastic skywatchers for the past few months, and will continue to be for a little while longer. Vega, the brightest member, has a parallelogram just below it (towards Altair), while Deneb is the very top of the asterism known as the Northern Cross. If you can locate the base of that cross -- the double star Albireo -- as well as the vertex of the parallelogram closest to Altair -- the blue star Sulafat -- you're well on your way to finding Messier 56. 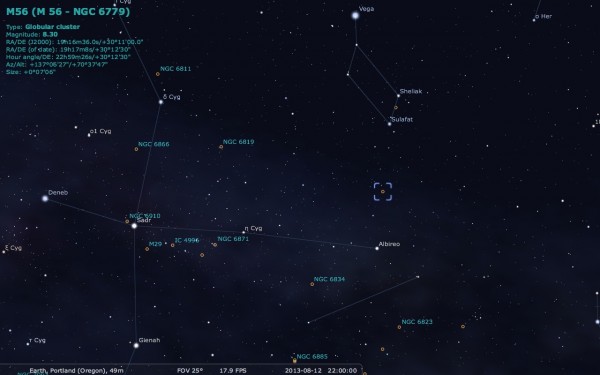 Almost exactly halfway between Albireo and Sulafat is a dim, reddish star, just barely visible to the naked eye under good conditions. If you can find it -- HIP 94630 -- just a single degree back towards Albireo, you'll find a dim, fuzzy object. That's Messier 56, our object for today. 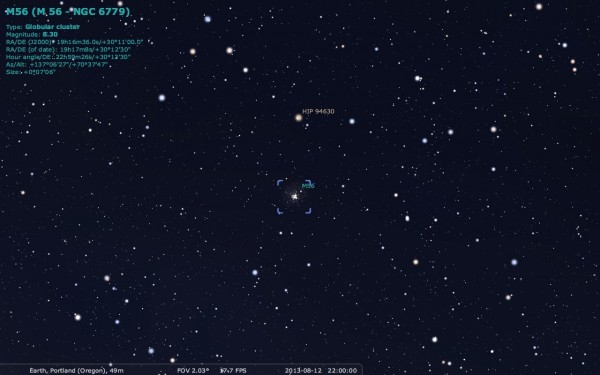 Messier's telescope wasn't powerful enough to resolve any of the globular clusters like this -- and there are 29 of them in his catalogue -- into individual stars. Some of the globular clusters have very dense central nuclei, others are more diffuse. They're classified on a scale of I to XII, known as the Shapley-Sawyer Concentration Class. Can you guess what M56 is from looking at it? 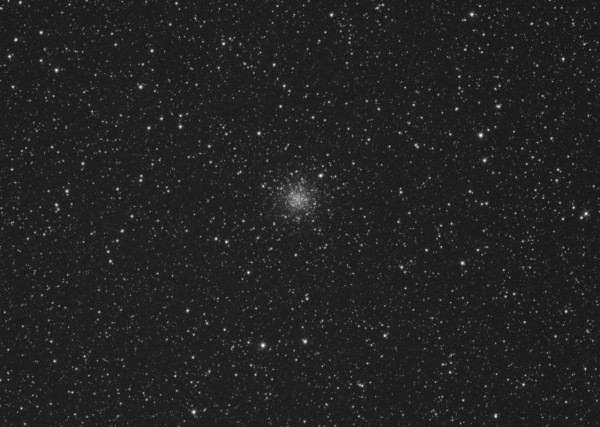 Image credit: ©2013 by Tony Cellini of The Drinking Bird, via http://www.dwfoto.com/blogs/blog6.php.

That "core" you see is actually incredibly diffuse; this rates an X (or 10-out-of-12), towards the very diffuse end of globular clusters. This cluster is really interesting for a number of reasons. Let's go through some of them. 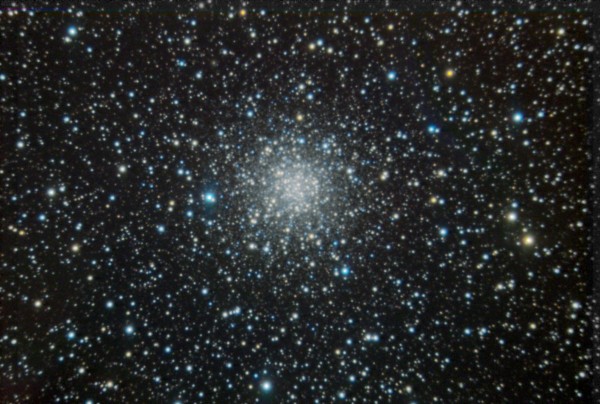 For one, this cluster is pretty dim for a globular: it's got a low-surface brightness (at around magnitude +9) and is difficult to find if there's substantial light pollution. And yet this isn't a tiny globular by any means: there are an estimated 230,000 times the Sun's mass concentrated in there!

The reason it's so dim is because it's so distant: about 33,000 light years, or about 35% farther away than the center of our galaxy! 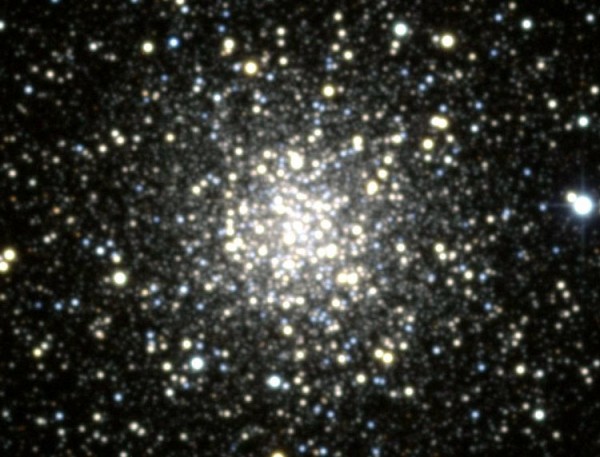 The blue stars you see in there, by and large, are not from the globular itself, they're from the intervening galactic plane; Messier 56 is partially interesting because it's seen by us through more than 50% of the galaxy. Good thing it's on the relative outskirts, and not towards the galactic center!

Although there are some blue stragglers in there -- or blue stars formed by the merging of two older stars -- the vast majority of these stars are dim, yellow/orange/red in color, and old. 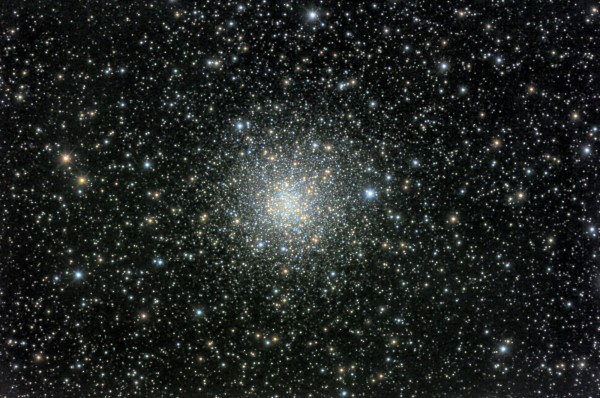 There's nothing too remarkable about its size (about 84-light-years in diameter), but its motion is quite bizarre: it appears to be moving in the opposite direction to the way the Milky Way galaxy rotates! When we see an object in our Solar System doing this -- like Neptune's moon Triton, which revolves in the wrong direction -- that tells us it's a captured object with a different origin than the rest of our Solar System. So what does that mean for M56?

It was probably formed around a different galaxy, one captured and destroyed by the Milky Way many billions of years ago! That's why it's speeding towards us -- from our point of view -- at some 145 km/s! 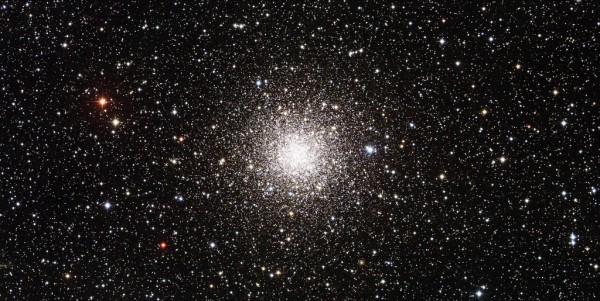 The stars in here all formed a long, long time ago, which we can tell by looking at the heavy element content of the stars in there, or their metallicity. Compared to the Sun, they only have 1% of the elements above helium in the periodic table that we have; this tells us they formed when the Universe was really, really young compared to today! In fact, estimates of this cluster's age place it at around 13.7 billion years (with a few hundred million years uncertainty), or nearly the entire age of the Universe!

There are also very few variable stars in there, consistent with an old (and relatively inactive) population of stars. 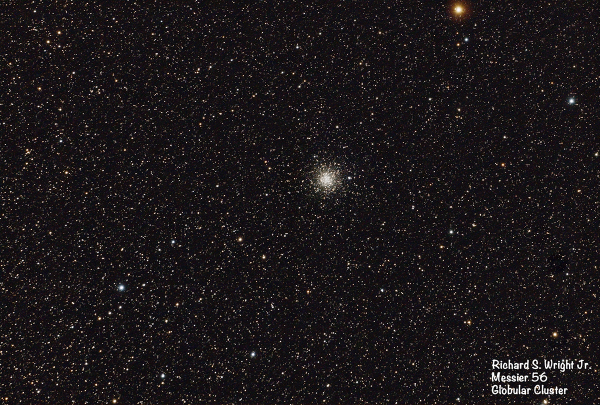 I don't have an image of it in the X-ray, but it appears that there's some diffuse X-ray emission concentrated in the wake of Messier 56. This would be consistent with this cluster traveling through the plane of the galaxy, and heating the gas inside of it to an amazing 940,000 K, which is plausible given the incredibly low densities of the interstellar medium here. (Remember, there's a difference between temperatures, which can get very high very easily, and heat, of which there is only a small amount!)

As always, the most breathtaking image of this object come from the Hubble Space Telescope. 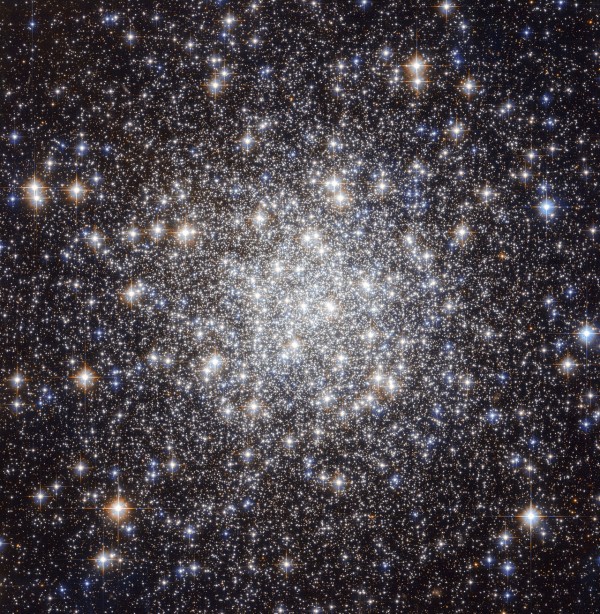 Unlike most Hubble images, this one owes its public existence to an amateur, Gilles Chapdelaine, who discovered and processed it as part of Hubble's Hidden Treasures contest last year. Here's a brilliant slice through the cluster's center, to give you a view of the thousands upon thousands of stars inside!

And that will wrap things up for another Messier Monday! Including today's entry, we’ve taken a look at the following Messier objects:

Join us next Monday, where we'll take a look at another one of the deep-sky wonders that make up the Messier Catalogue, only here on Messier Monday!

i for one cant wait for ethans blog on m87.

Thanks for the beauty of another one of universe's wonders!
I wonder how long did Hubble have to look at M56 to make the photo?

Thanks again for Messier Mondays. Each object has its story and you relate that brilliantly.

Say earth orbited a star in a globular cluster, would the night's sky be incredibly bright compared to ours? Or would it be relatively the same?

It'd be quite a bit brighter, but the moon would still have a much greater effect on the night sky than all the stars.

Those stars are still ~1 light year apart. And, on average, dimmer than our sun, which is about average in our galaxy.

Well done, Ethan. Keep up the good work. Such an opportunity for learning.