"We dance round in a ring and suppose, but the secret sits in the middle and knows." -Robert Frost

It's time again for another Messier Monday! To kick off each week, we've been taking a look at one of the 110 deep-sky objects that make up the Messier catalogue. Compiled in the 18th Century to help skywatchers avoid these fixed night sky wonders (so that they could better hunt comets), these represent some of the most viewed and easily visible nebulae, star clusters and galaxies visible from our home world. 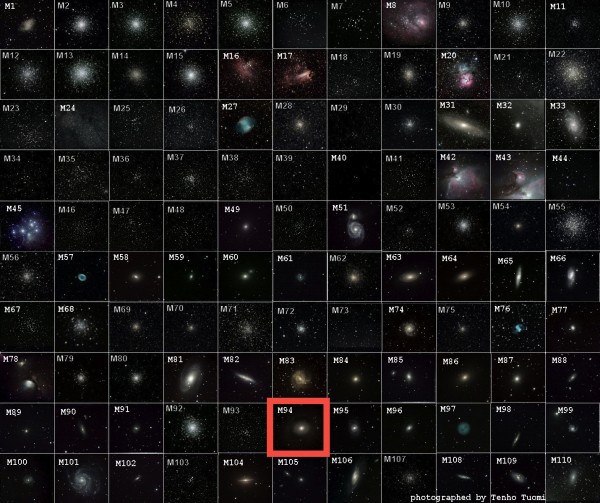 An amazing forty of these 110 objects are galaxies in their own right, far beyond our own Milky Way, each one is home to many billions of stars in its own right. And despite the similarities between them, each one tells its own unique story, and each one also hides some complex secrets. By looking at them, sometimes we're lucky enough to open a window into the fundamental truths about our Universe.

Today's object, Messier 94, may hold exactly that promise. Here's how to find it. 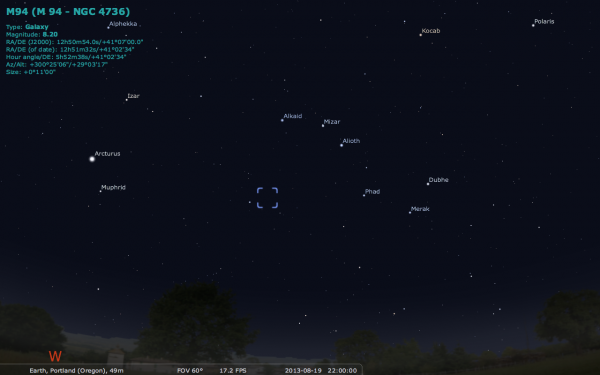 One of the more northerly Messier objects, start by finding the Big Dipper, one of the most recognizable patterns of stars in the entire night sky. It's true that you can follow the "arc" of the dipper's handle to the bright star Arcturus, but to get to Messier 94, it's better to drop nearly straight "down" and slightly away from the tip of the handle (marked by Alkaid), towards the prominent star Cor Caroli. 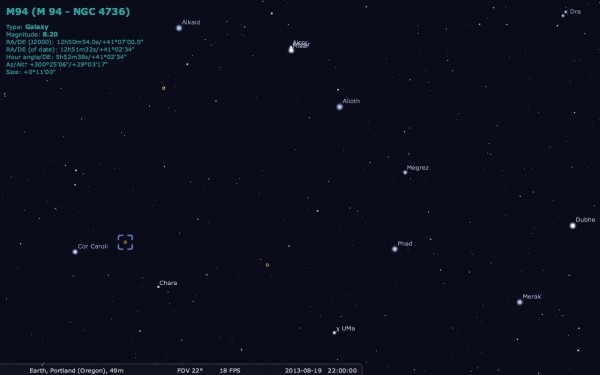 Technically, we're now in the constellation of Canes Venatici, or the hunting dogs. If you navigate from Cor Caroli just a couple of degrees back towards the cup of the Big Dipper, a faint, fuzzy object will greet you in a region that doesn't really have any prominent stars to help guide you. But if you can find it, that's the 94th object in Messier's famed catalogue. 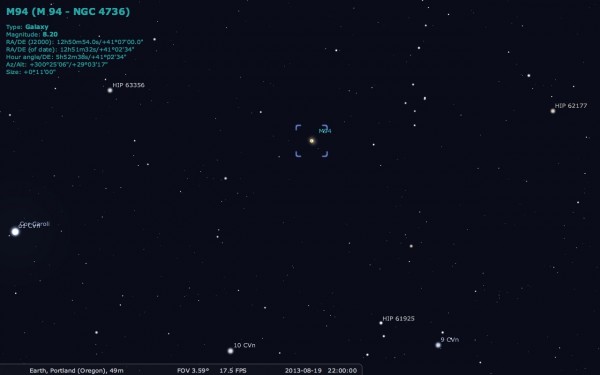 By this point, you've probably seen a great many spiral galaxies, and know that there's a huge variety in how they appear to your eyes. Some are edge-on, some are face-on. Some have tight spiral arms, others have winding, extended features. Some have only two arms, others have three, four, or even many more. Some have a bar in the center, other's have a bulge, and still others have neither. 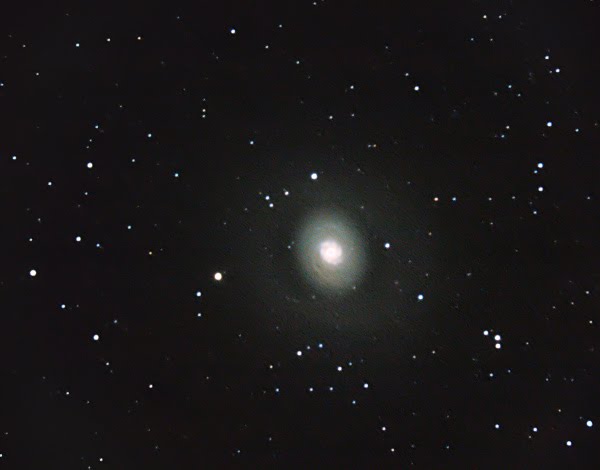 Through a small telescope, it's very hard to tell what's going on with M94. Messier himself had a hard time of it. This object was discovered by his assistant Méchain in 1781, and Messier's original description reads:

Nebula without star, above the Heart of Charles [alpha Canum Venaticorum], on the parallel of the star no. 8, of sixth magnitude of the Hunting Dogs [Canes Venatici], according to Flamsteed: In the center it is brilliant & the nebulosity [is] a bit diffuse. It resembles the nebula which is below Lepus, No. 79; but this one is more beautiful & brighter: M. Méchain has discovered this one on March 22, 1781. 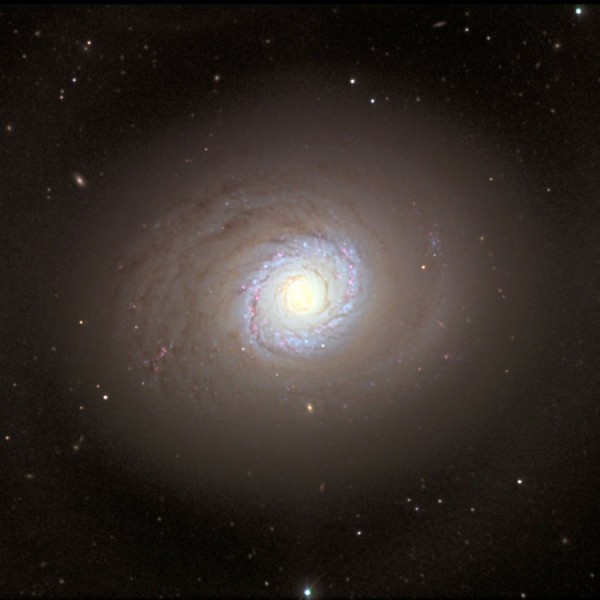 There's an incredibly complex structure here! There's something fancy going on in the very center, although it's too overexposed in the image above to see. There are also extended spiral arms that radiate outward, a bright "ring-like" structure part way out (replete with young blue stars and the telltale pink signs of new star formation), and continues to be diffuse and bright out well beyond that. 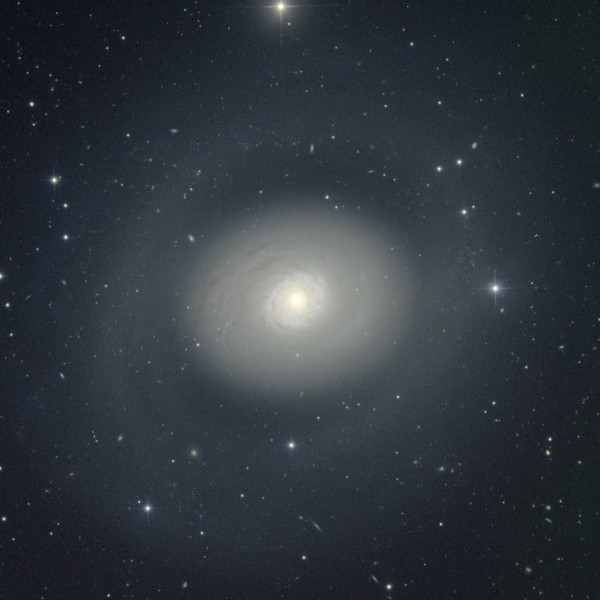 (As with all images, click on any here for a full-resolution version.)

At a distance of about 16 million light years, this galaxy is relatively small on the sky -- only about a sixth of a degree in diameter -- which puts it in the range of one-third (for the inner, bright part) to one-half (including the dim, diffuse outer portion) of the size of our Milky Way. It's moving away from us, and while it's the brightest member of a group of around 20 galaxies, it doesn't appear to be gravitationally bound to any of them. But unlike our "common" Milky Way, with its spiral arms and low star-formation rate, this galaxy is a lot more complex than we are! 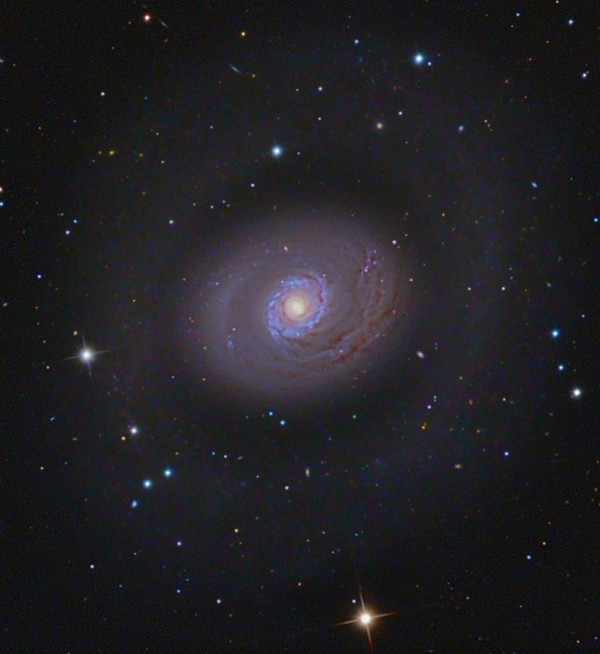 Let's take a closer look at these two rings, the inner and outer ones, and see what we can make of them. 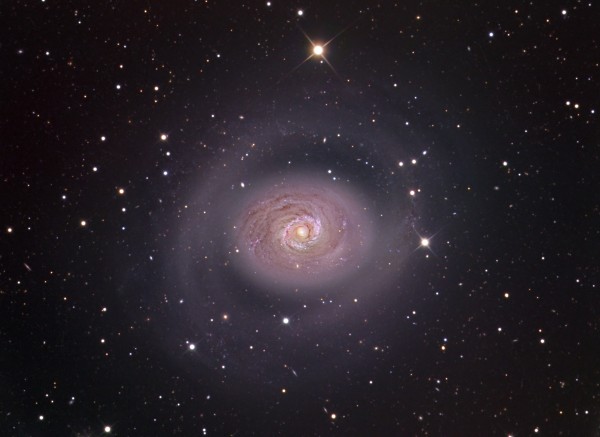 The very bright, central core of this galaxy isn't that uncommon: if there's a small bar at the center of this galaxy, gas can be driven towards it, triggering intense star formation. Even though we haven't discovered the bar (yet), it would be relatively small at only a few thousand light-years across, and this would be a reasonable explanation for it.

But the outer rings are more complicated, and still a source of controversy. To learn more, we need to look in different wavelengths. 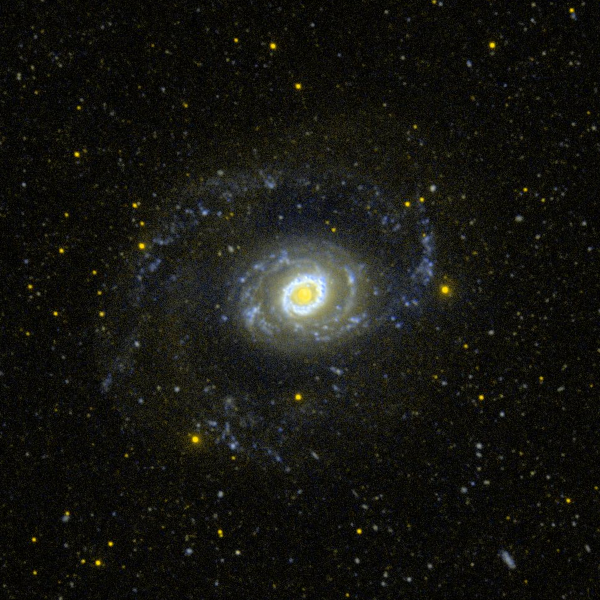 In the ultraviolet, thanks to GALEX, we learn that the outer "ring" isn't a ring at all, but rather an extension of one of the galaxy's spiral arms. More than that, because we can see so much in the UV portion of the spectrum, this tells us that this is where new stars have formed, telling us that this is an active, star-forming portion of this galaxy!

In fact, the outer disk contains about 10% of the galaxy's new stars, and nearly a quarter of its total mass. So if you were thinking that this is just a smaller, tidally captured galaxy, that's ruled out. 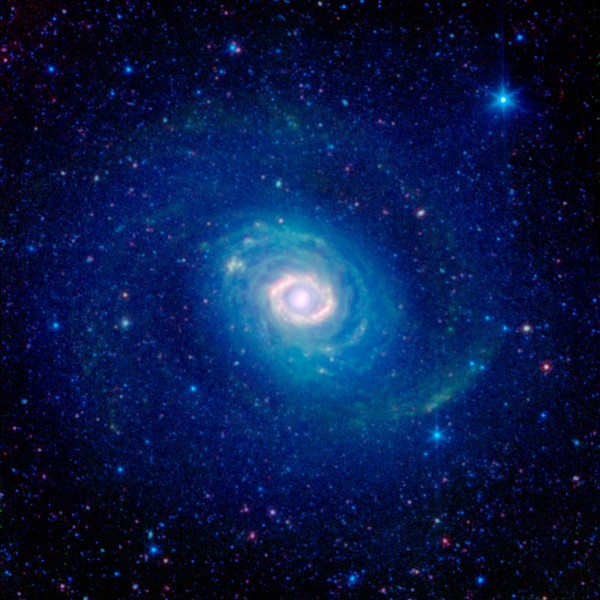 The infrared -- thanks to Spitzer -- also teaches us some very interesting things. This is where the warm interstellar dust lives, and as you can see, it's everywhere, and also concentrated in an intense spiral pattern with multiple, discernible arms.

What we appear to have, based on all of this data, is a distortion of the galaxy's inner disk that's probably caused by the spiral structure itself transitioning from one quasi-stable state to another. If we overlap the optical, ultraviolet and infrared together, we can see some remarkable evidence pointing to this theory: the spirals in each wavelength don't line up! 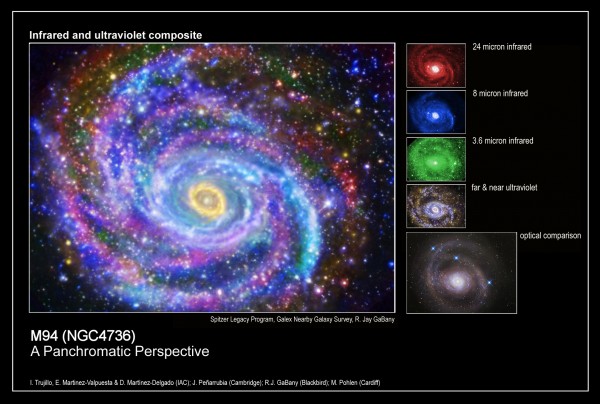 There's also another puzzle about this galaxy, although it's tentative: there doesn't appear to be any dark matter in this galaxy at all! This would be a puzzle for both dark matter and MOND, as neither one can explain the observed rotation of this face-on spiral, but there are some difficulties with measuring the rotation speed of any face-on object, and so the results are a bit suspect.

In any case, this is a remarkable object, and it's definitely worth your time, especially if you're an astrophotographer! I'll leave you with one final image, courtesy of Emil Ivanov. 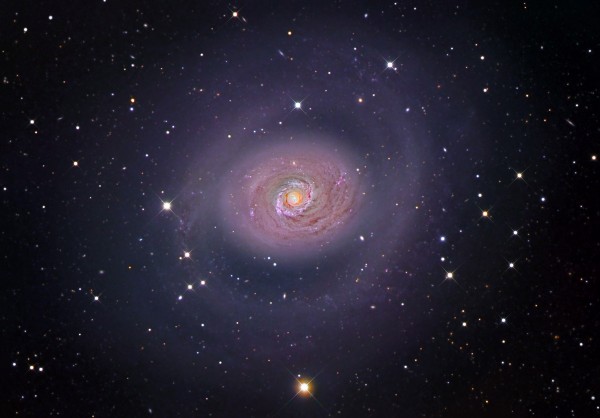 (Sorry, no Hubble image of this one. Yet. Come on, STScI, what are you waiting for!)

And that brings us to the end of another Messier Monday! Including today’s entry, we’ve taken a look at the following Messier objects:

Come back to us next week, where we'll examine another one of Messier's deep-sky wonders, and take another step toward understanding our Universe -- and our night sky -- that surrounds us!

Actually, HST has taken images of this galaxy many times, using several different cameras: ACS, WFPC2, NICMOS, even the good old FOC. Anyone can download these images from the HST archive and enjoy them.

That's really exciting; I went and looked like this, and didn't find anything. How do you navigate through the archive to find them?

Hi Ethan,
could it be that this galaxy is not a disk? Instead, seen from its side, it would look similar to a cone?
How could one prove such idea?

With this much detail going into this, you might be able to pull off an honorary Astronomical League certification. Granted you aren't visually observing these with your own telescope but hell worth a shot. If anything, I am sure they would be honored just to be able to link back to this for supplementary data.

Personally I have been working on the Carbon Star list. Only 14 more to go. I just have to wait for the bastards to circle back around. I can stay up late but waking up at 4am to observe always ends in me sleeping in.

just put M94 in search, or NGC number 4736 and you should be good. Tons of imagaes

I guess it's going to be a bit like your own form of "TVTropes", Ethan :-)