Comments of the Week #29: From the earliest signals to the present day

“Everything comes at the right time, but if the right time is too late to be patient, go earlier before it becomes too late.” -Michael Bassey Johnson

After another fun-and-science-filled week here on Starts With A Bang, where we've covered topics ranging from near-to-far, from historical to very modern, and from the beginnings of the Universe up to the present day, it's time once again to take a look at the fabulous comments you've left for us! Looking back, we've recently covered the following topics:

You've had your chance to say all that you like, and now let's dive in to what I think are the five most important points to follow up on, on this edition of Comments of the Week! 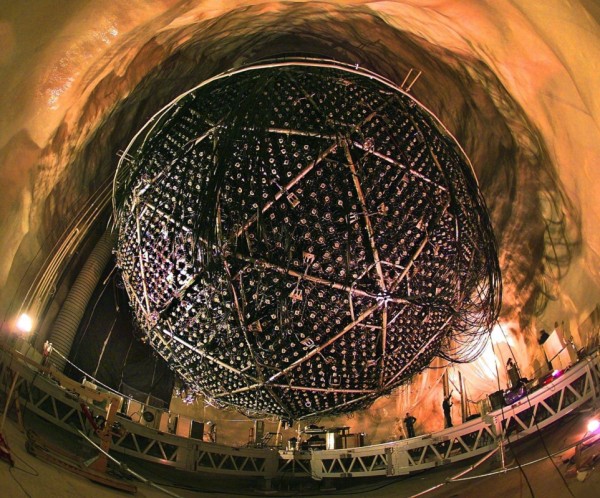 From Robert Oerter on the subject of the Early Universe: "Cosmic background neutrinos would presumably give yet another window on the early moments of the Big Bang. Gravitational waves probe the inflationary era – what era would neutrinos probe?"

It's important to remember that anything that's created in the Early Universe that remains a stable particle to the present day, even if it's as elusive as a neutrino, should still persist, and should still carry important information to us. Gravitational waves are generated during inflation as (tensor-mode) quantum fluctuations arising from the conditions at that time, while other fluctuations lead to density perturbations. These translate into over-and-underdense regions of space filled with matter, antimatter and radiation at the onset of the Big Bang.

Image credit: James Schombert of the University of Oregon.

The antimatter and the excess matter annihilate away, creating a sea of radiation that cools and redshifts as the Universe expands, leading to the Cosmic Background Radiation observable in the microwave today, with a peak temperature of 2.725 K. But neutrinos interact much more weakly than photons do, and they stop coupling to the matter-and-radiation in the Universe when it's only about one second after the Big Bang, meaning that neutrinos would have a temperature of "only" 1.95 K today. Because neutrinos have mass, and that mass is significantly large compared to the kinetic energy associated with a temperature of around 2 K, these neutrinos should exist as an extremely diffuse halo around galaxies and clusters of galaxies: a small fraction of the dark matter. They probe that strange era before electron-positron annihilation but after all the other antimatter particles annihilate away, and detecting them would confirm one of the last great predictions of the Big Bang model! It's not practically feasible -- as commenter Michael Kelsey alluded to -- but these neutrinos are there, and we may yet figure out a clever way to get at them! 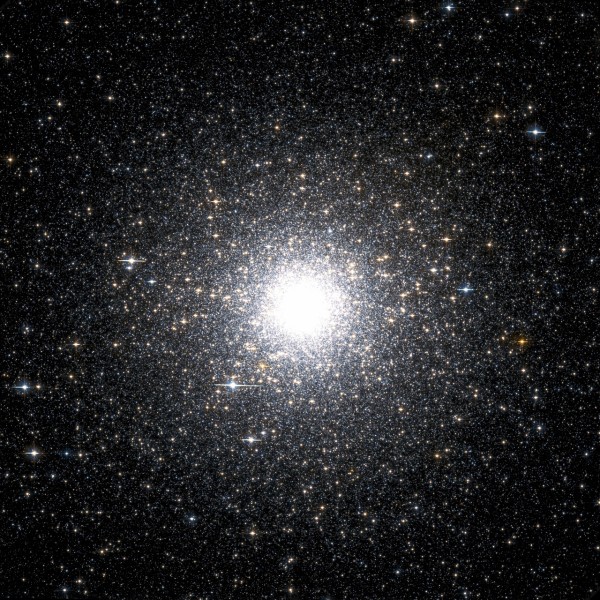 From Omega Centauri on the first extragalactic globular: "Being that there are some later generations of stars in this baby, it is possible that some of these stars have sufficient metal[l]icity to have formed planets. Is the environment too hostile for the orbital stability of planets in such a system too strong to rule out the possibility of advanced life?"

When you look at the above image, or think about stars in general, you think about these huge timescale (billions of years), you think about the tremendous number of chances of a gravitational interaction, and you start to worry about whether planetary orbits might have a good chance of being perturbed. The thing I want you to think about is how big a light-year is and how small the Earth-Sun distance is, by comparison: they differ by a factor of 63,000. This means if I shot our Solar System through a dense region of space, where the density was one star per cubic light-year, at a speed of (let’s just pick a number) 200 km/s, I could compute how long, on average, it would take for another star to come within one AU of the Sun.

Image credit: James Schombert of University of Oregon, via http://abyss.uoregon.edu/~js/ast121/lectures/lec24.html.

The answer? About two trillion years, which tells us that for all but the very densest portion of these clusters, habitable-zone planets should remain habitable for very long periods of time. There will certainly be many systems inside that do have their planets disrupted, but it won't be the majority. Not only can't we rule out the possibility of advanced life, but on the contrary, it might be a great place to look! 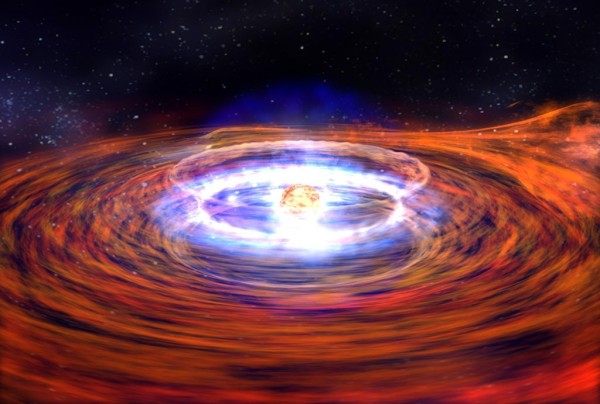 From John Duffield on Einstein's Greatest Legacy: "1.What is relevant is only that what is measurable.

2.You must not fool yourself.

John is referring explicitly to redshifts in general relativity, and although he gives an example seeking to disprove these contentions, they are actually a spectacular example of how this works! Consider his exact example of a photon of 511 keV -- the rest mass of an electron -- that falls into a black hole from an arbitrarily large distance away. His contention is that if you are close to the event horizon of the black hole, when that photon streams past you, it will appear to have more energy than 511 keV due to the phenomenon of gravitational blueshift, a prediction accurately made (and confirmed) in general relativity.

This is true, but it is, in fact, the photon energy that changes -- in this case, increasing -- as it falls into the black hole! To an observer at the original location an arbitrary distance away, the black hole mass will increase by (from E=mc^2) 511 keV/c². But to an observer closer to the black hole's event horizon, they will see the mass of the black hole appear to increase by the energy of the photon as it was when it passed them! This is what the principle of relativity dictates, and what the "relativity" part of it means: that all observers see a consistent set of physical laws and phenomena relative to what they observe, even though what they observe is different from one another.

And the whole point is that different observers could perform this same experiment and see different -- but consistent and predictable -- results. For a spectacular thought experiment, I refer you to this article.

From Pavel on the idea of the Universe destroying itself: "How reliable are the ideas about metastable Higgs field? As far as I know, these ideas have origin in SM calculation of Higgs potential and the “stable” point is predicted at Higgs field energies well outside energies the SM is usable for. So for calculating Higgs potential at so high energies we need some BSM theory not know yet. In the range where SM can be used, the Higgs field is perfectly stable."

When we talk about the Higgs' stability, we basically look at all the parameters in the standard model -- masses, couplings, scaling laws, etc. -- and calculate at what energy scales the equations are stable up to. Basically, if you're stable all the way up to 10^19 GeV, that means you don't need any new physics (new particles, fields, interactions, dimensions, etc.) all the way up that energy scale in order for the Universe to be stable. Which means we would have no reason to expect that there's new physics at those scales. As it turns out, the laws of physics are sufficiently well-known that the only three real uncertainties are the masses of the W-boson, the top quark, and the Higgs boson itself. In addition, there's also a theoretical term (λ) that describes the quartic coupling of the Higgs potential to the standard model, and this coupling is allowed to change with energy. 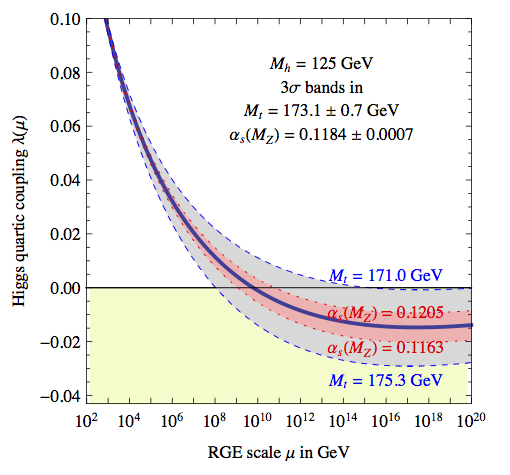 In this case, the 3σ result is a big deal, as the improvements made to the LHC should allow us to better measure the Higgs mass and the top mass, to get that up to 5σ over the next 5 years, tops. Keep an eye on this one!

And finally, from Ikjyot Singh Kohli on the topic of cosmic inflation, the first of the steps we can speak confidently about when it comes to the origin of the Universe: "Of course... this article assumes: That the universe was spatially homogeneous and isotropic throughout its past, which is how a patch of de Sitter space to undergo inflation exists to begin with. This assumption although common, is not completely justified given that the early universe may have had strong anisotropies."

It's important to recognize how little information we have from the inflationary epoch of the Universe in our observable Universe today. We have the flatness of space, the uniformity of regions that should otherwise be causally disconnected, the lack of ultra-high-energy relics, and the observed spectrum of density fluctuations to guide us, sure, and those are big things. But we only have observable evidence arising from the final 10^-34 seconds (or so) of inflation that are imprinted on our Universe. 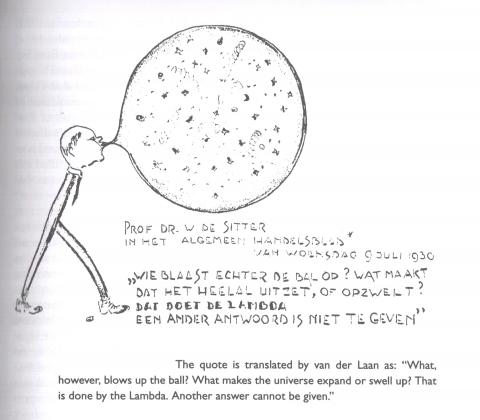 Illustration from the 1920s/30s; this has got to be public domain by now! Via http://www.bernardhlavenda.com/?q=node/39.

And if you can make a model of cosmology that reproduces the observable pieces without adhering to the standard picture, you've got an interesting model to consider, no matter how contrived it appears to be. We have very good reasons to make the (often simplifying) assumptions that we do, but it's always important to remember what we have assumed, and how those assumptions could be changed in ways that are still consistent with the Universe we observe. We have a more accurate model of the Universe than we ever have at any point in human history, and there's no doubt that science -- both the body of knowledge and the process of it, combined -- will continue to refine, tweak, alter and improve this model as we move forward. I can't wait to see what we learn next!

Thanks for a great week of comments, everyone, and I can't wait to share the next one with you all as well!