They say that a cat has nine lives, mostly because of their uncanny ability to find themselves in -- and escape from -- frequently perilous situations. Perhaps, of all the animals that he could have chosen, that's why Schrödinger made his famous thought experiment about the most diminutive of felines.

But there's an incredible outcome that one interpretation -- the Many-Worlds Interpretation -- of quantum mechanics allow for: that any time there's a situation where you have the opportunity to either meet your demise or survive, there's a Universe where you continue to live. 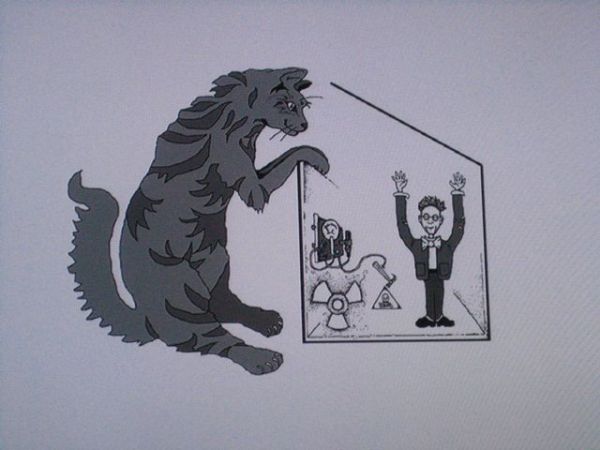 Could this result in a kind of quantum immortality? Paul Halpern explores the possibilities.

Farnsworth: "There is it. The edge of the Universe!" Fry: "Far out. So there's an infinite number of parallel Universes?" Farnsworth: "No, just the two." Fry: "Oh, well, I'm sure that's enough." Bender: "I'm sick of parallel Bender lording his cowboy hat over me!" -Futurama Our existence here in…

Comments of the Week #53: from supertides to the LHC

“If you laugh, you think, and you cry, that's a full day. That's a heck of a day. You do that seven days a week, you're going to have something special.” -Jim Valvano It's been a little too long since I rounded up the best of your comments and doled out the astrophysics knowledge to fill in the…

The 3 Ways That Parallel Universes Could Be Real (Synopsis)

"As an analogy one can imagine an intelligent amoeba with a good memory. As time progresses the amoeba is constantly splitting, each time the resulting amoebas having the same memories as the parent. Our amoeba hence does not have a life line, but a life tree." -Hugh Everett We only have the one…

Everybody Wants to Rule the Quantum World (Synopsis)

The biggest, most surprising revolution that came along with the development of quantum theory, quantum mechanics and later, quantum field theory, was the overthrowing of the idea of a deterministic Universe, replacing it with a Universe where only a probability distribution of outcomes could be…

http://www.tor.com/stories/2010/08/divided-by-infinity by Robert Charles Wilson is a short story about quantum infinity

So even humans 50,000 years ago somehow are still alive in some branch? Wouldn't that require alien intervention? If so, how did the aliens achieve quantum immortality when their species was nascent? Can you bootstrap this from the beginning of time?

What about animals? Would quantum immortality apply to them too? Only certain animals?

Alastair Reynolds covers this belief in his short story, "Everlasting", in the Zima Blue collection.

An even Better, simpler and logical answer is that the world is a simulation, a computation, its data, and consciousness is the computer. please check My Big Toe from Tom Campbell: https://www.youtube.com/watch?v=-RMOGFaOLSQ

Whoa there!, not so fast.

Immortality = The eternal persistence of an intact individual mind. Eternity is an immeasurable quantity. Therefore, as with the existence or nonexistence of a deity, there is no empirical way to ascertain if immortality exists: the question is outside the domain of empirical science.

Since minds are so closely linked with brains, it becomes reasonable to infer that even if reality branches out indefinitely per Everett, each of those branches eventually comes to the point where you die, and your brain ceases to function. What then of your mind?

So, quantum branching at each wave-function collapse does not get you a hereafter, much less address the issue of immeasurable immortality.

And, to put a popular bit of pseudoscience to rest, there is no "uploading" a mind into a computer. Even if making a copy of a mind was possible (it is not), the original does not have forward continuity into the copy any more than if you cloned yourself: so when you die, you're still dead, dead, dead.

There is however, another potential line of speculation. That would be if the individual mind was nothing more than the localization by a brain, of some kind of field phenomenon: mind at-large. For a very rough analogy (that is not a theory or a model or an explanation) you can envision one of those diagrams of spacetime shown as similar to graph paper, where the presence of a large gravitational object such as a planet, alters the fabric of spacetime as if to pull the depicted graph down around it. If the planet was blown to smithereens, the large and tightly-focused alteration of spacetime would cease, and each of the resulting pieces of planet would have a tiny effect on the larger fabric of spacetime.

The things that make a mind, are not only the brain itself, but also the information stored in it. Per Chalmers (interactionist theory of mind), that information is a fundamental constituent of reality. Per Wheeler ("it from bit"), information in general is the fundamental quantity underlying all else. None of this gives us a firm answer, but it's worth contemplating, and perhaps at some point we'll find ways to convert the rough and highly imperfect analogies into variables that can be quantified and studied empirically.

The idea that our universe is a simulation in a computer, and we are bits in the simulation, necessarily entails that someone built and programmed the computer and built the simulation.

Any such "someone" would have to have existed before our universe, and would exist outside of our universe. "Before, above, or outside of nature" is the definition of "supernatural." For all intents and purposes, any such person would be a deity, and their computer would be a supernatural entity itself.

So in the end, beliefs about computers and simulations are just the latest form of beliefs about deities and hereafters. This is not surprising: instead of staring at the sky and envisioning Sky Gods, people today stare at computer screens and envision Computer Gods.

Personally, if I was seeking to locate a deity, I would find it manifest in nature itself: the magnificent, awesome, brilliant, beautiful universe in which we find ourselves.

In the science fiction book "Quarantine" by Greg Egan, a group of beings that live in quantum superposition surround our solar system with a sphere that blocks any human observation beyond the sphere. The reason? As humans peered further into the universe we were wiping them out wholesale when our observations collapsed their quantum states.

This 'multiverse' is just the strong Anthropic Principle given a different name. By definition this multiverse is the one where I'm not ice-fishing right now and away from the computer, or am dead, or was never born (and Ethan hasn't died, and you haven't died, and an asteroid didn't just hit the Earth). A more parsimonious explanation is that when you die your wave function collapses and your degrees of freedom go to zero. This happens to U-238 atoms all the time; it's only human vanity which ascribes a special exception to us.