Galaxies detected beyond the limits of Hubble! (Synopsis)

“Our posturings, our imagined self-importance, the delusion that we have some privileged position in the Universe, are challenged by this point of pale light. Our planet is a lonely speck in the great enveloping cosmic dark. In our obscurity, in all this vastness, there is no hint that help will come from elsewhere to save us from ourselves.” -Carl Sagan 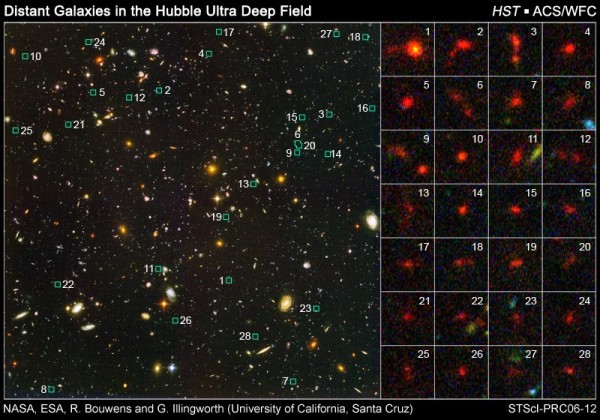 We will likely find them with the James Webb Space Telescope, but that's not for a number of years. Yet we don't have to wait! Thanks to looking at the extragalactic background of light, we can draw conclusions about how many distant galaxies there are beyond the power of Hubble to resolve them into sources, and at greater than 99% confidence, we've detected that there need to be at least tens of billions of them out beyond anything Hubble's ever seen.

It's an amazing new discovery, hot off the presses. Find out about it today!

In the medium.com article you mentioned "Hubble's photographic plates." It doesn't have them, does it? There's no glass plates with chemical emulsions on them, right? It's all digital nowadays.

It is possible Hubble as the person, rather than HST, was being referenced, in which case, plates were definitely used. Just a thought .... :)

Whoa, did I read correctly that galaxies were detected at "at least 30 billion light years away?!"
...Wouldn't that mean we'd have to reassess the age of the universe?

it is, however, a little confusing, so Charles isn't wrong to be "surprised" at this revelation.

Charles, short version:
light from the edge of the visible universe traveled about 13.8Bn years, and that is usually the claimed size of the universe. However, those bits have moved on for 13.8Bn years and are no longer the same distance away.

About 90Bn light years across, depending on exactly how fast expansion has gone.

Thanks for the clarification about the light distance!