Astroquizzical: Could black holes be the engines of new galaxies? (Synopsis)

When young galaxies are first formed, they're accompanied by tremendous bursts of star formation, giving rise to billions of new stars within just a few million years. Yet how these galaxies first form in the initial stages is very much an open question. In addition, pretty much every large galaxy we find -- even in the extremely young Universe -- has a supermassive black hole at its center. 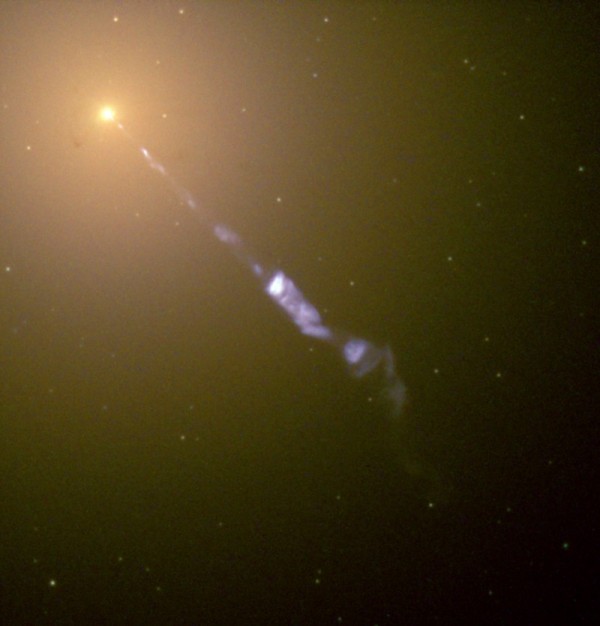 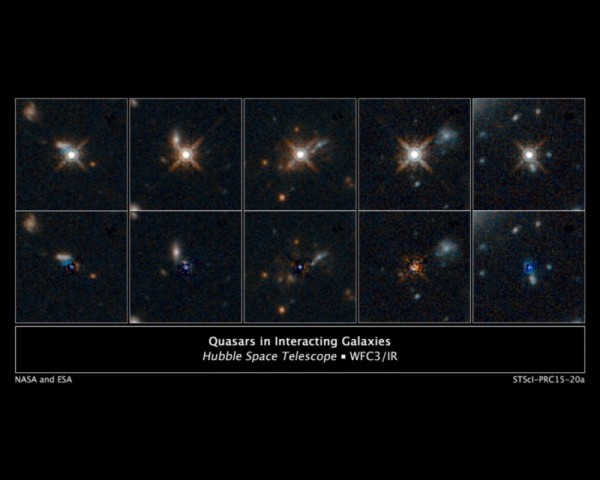 Jillian Scudder has the answers for you, and some amazing bonus information to boot!

I imagine we have competing effects. A strong gravity well attract gas, and thus should help star formation. But high energy output can heat the surrounding gas, and push it away from the galactic center (or plane), or even inter intergalactic space, eliminating the material for future star formation. So do SMBHs act as a kind of star formation governor, thinning the galaxies gas to reduce star formation (and SMBH feeding as well)?

A clincher for SMB preceding galaxy formation would be finding that they're more liable to be offset from the gravitational centre of the galaxy the younger they are.

After all, there's no reason to suppose that the black hole forms where the most collapsible matter happens to be.

My thoughts have always been that quasars may be two or more SMBs colliding to form what will be the galactic SMB we see in older galaxies like ours, or M31.

Such events may even say something on how you get an elliptical compared to spiral galaxy. Spirals would form as the result of the orbit of two merging black holes being naturally a planar event when there's only two such objects doing the business.

OC @1 - I'd bet that when gas is pushed out from a SMB it causes a wave front of higher density gas, with lumpy areas that are great for star formation. Stars could form further out from a galaxy's center and migrate inward; studies of globular clusters show a mechanism that's similar.

It's a theory. As in the colloquial sense.

Things that would have to be detected are myriad and I can only think of a few that would be indicative, but there would need to be much work on the dynamics of star formation to see how close they'd have to be together to merge that large that quickly. It would also lean toward greater inhomogeneity in the early density of the universe at star formation meaning more spiral galaxies (in that you need fewer in a dense clump to make it so simple).

And so on and so forth.

Intriguing to think of a SMBH excreting matter into a galactic plane, then accreting by feasting on the very same material; sort of humanistic in a weird sort of way - creating, then destroying.

It's a reality of continued existence without creation.

I think that smb and galaxy formation are closely tied together. in a sense that as first generation stars go nova (being much more massive then 4th generation) you end up with black holes that are already maybe 100s of solar masses, they then act as an "anchor" for more gass as well giving energy to ionise the same gas, and kick start new stars.

the usual narrative today is that we think most galaxies have a smb in the center. what I"m curious to know is do we know of a single galaxy, that we know doesn't have an smb in the center?

or will in fact turn out (as I hope) that eventually the narrative will change, and it will be that you can't have a galaxy without having an smb...and vice versa...

We only know of SMBs in nearby galaxies or active black holes. They're not easy to see otherwise.

We extrapolate from the small set into the larger one, but it's still an extrapolation. It may well be it's merely common and selection bias is at work.

IOW, distant active galaxies are old but MUST have an SMB otherwise we wouldn't be able to see it so well, and all the nearby ones are very much older than the earliest galaxies. Extrapolating that all the nearby old galaxies have SMBs to all young early universe galaxies have SMBs is not proven, nor possibly provable, unless we get a theory that holds well elsewhere that necessarily makes it so.

It's not a WAG, but it IS still a G, based on the little evidence we have.

Remember what and when you read this.

No big bangs. Big bangs are only for destruction, never for creation.

All galaxies, stars, planets and atoms produce their own energies.

Blach holes exist at the center of all spinning masses, regardless of their size.

The theory of the four current fundamental forces are wrong,

To make gravity, energy is needed and to make energy two masses are needed.
It is the interaction of these two masses that produces everything in our observable universe.

Gravity and electromagnetism become the byproducts of the two masses at work.

So remember...
Gravity and energy are made and can be destroyed... there are no phenomenons, only bad science.
Phenomenon is the word used to propogate" dont know".