Ask Ethan #113: Would A Scientist Bet Their Life On A Theory? (Synopsis)

"In theory, there's no difference between theory and practice. In practice, there is." -Yogi Berra

Scientific theories are a dime a dozen, yet only the most successful have a large range of validity, hold up to many disparate lines of evidence, and stand the test of time. Inevitably, our explorations go beyond that range of validity, and a new theory must come along to supersede them. 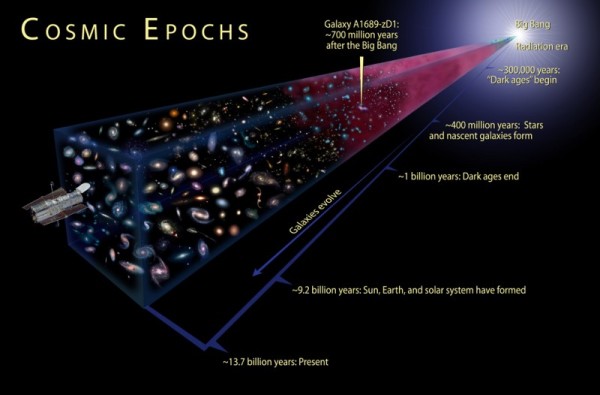 But does that invalidate the old theory? And does that mean it would be irresponsible to bet your life that the idea you're working on is correct? While no theory can ever be called "fact" beyond a doubt, there are good reasons to believe that some theories, like the Big Bang and evolution, will never be overturned. Still, it's always possible, and that's part of why we do the science in the first place.

Go read the whole thing over at Forbes.

“Would A Scientist Bet Their Life On A Theory?”

Ethan, that is probably my favorite headline of yours. And a good question.

I’ll take a crack at answering it:
Would A Scientist Bet Their Life On A Theory? Probably not. But they’d definitely bet *trillions* of dollars of *other peoples’ money* on it (e.g. stopping anthropogenic global warming).

"Probably not. But they’d definitely bet *trillions* of dollars of *other peoples’ money*"

Monsato bet trillions of dollars every year of other people's money on their research.

And want you to pay a profit to them even for their failures.

Private business bet trillions of dollars every year of other people's money and skim off it. AND GET LAUDED FOR IT.

Yet those scientists, showing that god isn't needed, must be collected all together and lambasted for trying to find out what IS going on, rather than just sit back and go "God did it!".

Would A Scientist Bet Their Life On A Theory? Probably not. But they’d definitely bet *trillions* of dollars of *other peoples’ money* on it (e.g. stopping anthropogenic global warming).

I seem to recall your announcing that you had staked your life on, basically, the Catechism. It's wholly unsurprising that your whining is predicated on mammon.

We understand concepts based only from a space time frame of reference. It is extremely difficult to comprehend axioms that as major premises are neither finite particles nor waves. The ground state of all finite expressions is an energetic whole that as a finite volume of mass is a segment , or quantum , of dimensionless and omnipresent infinite pure energy.
Infinite pure energy is the essence and ground state of all finite expressions. As a steady state it is the invariant essence of our entire universe. We however exist within the plane of reference of a moment in the evolution of the entire metabolic cycle that fills the here and now of its energetic whole with the same finite volume of mass that exists at every moment in its entire cycle.
Our plane of reference is restricted to within our sensual perception of the event horizon of light's finite speed. Light energy has mass consistent with any other part that fills the inertial steady state of its energetic whole.

Evolution within a metabolic cycle is as on going as its source of infinite pure energy. Only within the finite space time frame are there properties with beginnings and ends. Everything evolves into something else continuously forever within the metabolism of an energetic whole. The Big Bang was only the property of one gross aspect of the energetic whole in its infinite evolutionary process.

I am no scientist, if I was I would if there was some one who had correct version. Or understanding of it. at the moment there is no one to appreciate correct from the wrong. most I have read repeat what they have been fed. They talk about big bang without understanding gravity, they talk about cosmological distances without understanding structure of photon. We always faced this problem. just like flat earth or pelage. you need the bigger picture to see the cluster but smaller picture to understand and remedy the deseas. MG1

You would have to explain what "infinite pure energy" is before anyone could comprehend whether this was in any way feasible. As it is, it is no different from claiming "infinite cake is the essence and ground state of all finite expressions".

But with that addition, what's the problem with it?

Try English. Not gibberish. Nobody here is fluent in gibberish.

"The Big Bang was only the property of one gross aspect of the energetic whole in its infinite evolutionary process."

See above: try English not Gibberish.

Frank, when you've worked out what it is you wanted to say, work out how to say it.

I don't agree with many, if not most, of your premises. The limitation of massive particles to sublight velocity is theory, and I believe it will never be superceded or invalidated, for instance. Neither the Big Bang nor Evolution is "a theory". BB is a loose framework of theories, which I doubt anyone would claim has been shown to correctly describe more than a few percent of the total energy of the observable Universe while (macro)Evolution by definition deals with the existence of an undefined (and unobservable) "thing" called a "species" Like the standard model of particle physics, neither is a single formally defined "theory" (constructed from a defined set of axioms and operations/processes). afaik.

Possibly the only reason "nobody" would claim as you assert is because they wouldn't know what that assertion means.

And species does exist.

You may be thinking of "kind" from the bible.

But evolution isn't the theory of species.

Both the big bang and evolution are theories. The big bang is the observation that the universe is expanding, therefore it must have been smaller in the past, and at some point everywhere is at the same point. The big bang theory is what the laws of physics do at that point, and whether the observations match or invalidate that theory.

Evolution is the inevitable consequence of the observation that life multiplies at a rate faster than that required to keep a steady population, therefore selection pressures will decide which live and which do not survive. Since life is also liable to copy mistakes when creating new organisms from the "parents", the mistakes will either help or hinder (or give no change) the survivability of the creature with that difference compared to the other competing organisms. The inevitable consequence of this is that there will be adaption to whatever niche becomes available to autotrophs that exist in the biosphere.

The claim that they are not a single theory is either pointless or wrong.

Either you are saying that evolution is a collection of biology theories that describe evolution in the world, in which case the difference is meaningless, because reductionism will break it down to smaller pieces to make it easier to describe, or you're saying nothing evolves. Which is wrong..

@Li #11: I think you may have confused two different, but similar sounding, terms. At the end of your comment, you write, "... a single formally defined “theory” (constructed from a defined set of axioms and operations/processes)." Nope. That is a _theorem_, usually defined only in mathematics or formal logic (though there are a small number of theorems in physics, including some of our conservation laws).

A _theory_ in physics is a very broad based model of the world, which connects disparate features into a single explanatory framework, and which makes a wide range of predictions for the behaviour of physical systems within its framework. The Standard Model, big bang cosmology, and evolution are _all_ theories in this sense.

@Li #11: You're also very wrong about the Standard Model. It is, a basically unique quantum field theory. That is, it is a particular anomaly free, chiral, quantum field theory that has a specific gauge group, particle content, and predictions with most of the free parameters being stuck in the Higgs sector. At any rate, the Standard Model is not a loose connection of theories at all, and it does have a clear and formal definition, which I think is clear given that there is a unique Lagrangian for the model. Having the ability to write down a singular mathematical representation for the theory from which you can immediately start making calculations that yield unique predictions sure seem like the model is formally defined to me.