"Gravitational and electromagnetic interactions are long-range interactions, meaning they act on objects no matter how far they are separated from each other." -Francois Englert

One of the most spectacular predictions of Einstein's General Relativity was the existence of gravitational lensing, whereby a large foreground mass could act as a lens, magnifying and distorting the background light source behind it. Although this was first observed for quasars, large galaxy clusters act as the most powerful lenses. 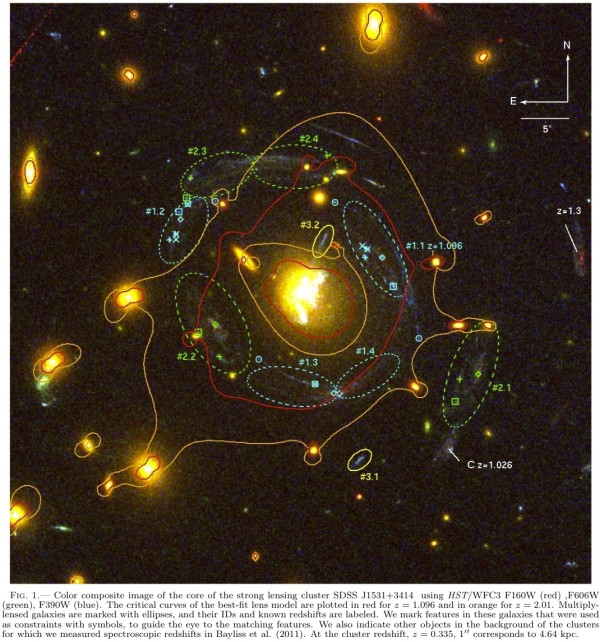 Which is why it was such a surprise that the brightest feature in the recently observed galaxy cluster SDSS J1531+3414 wasn't from gravitational lensing, as originally thought, but was simply a gas bridge of star formation connecting two giant elliptical galaxies. It took redshift data for the individual components to arrive at that conclusion, showing once again that even the best experience and intuition is no substitute for good data. 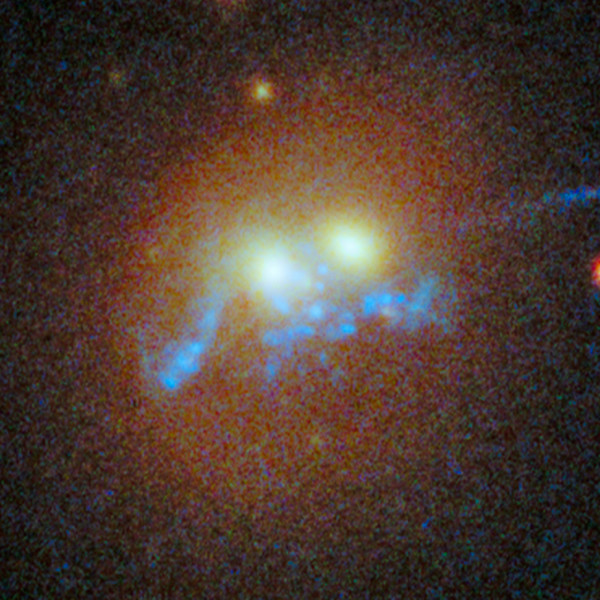 Love your blog, but I can never read the full post. The link to the Forbes site never get past the welcome screen. I'm using an up to date iPad and Safari

Apros of nothing I'd like to share my thoughts and hopefully get some feedback. So, in Australia we had a dimwit politician bang on about quantum computing. I seriously doubt that he had the first clue about what a qbit was. For the unitiated, if your on this site you know that a bit is; i/o. A qbit is a combination of both so that it it can be i/i/o or i/o/i or any other combination. At this point in time all this is theoretical but the bottom line is that at some point it has to be digitalised to make sense and there's the nub. The limit to human intelligence. Our brains are driven by electrons; relatively massive particles in the general scheme of things. on or off. and our mathematics are limited. Quantum mechanics has holes in it and so does our maths. Odds and evens; totally a concept and nothing else .7 identifiable transcendental irrationals, neither odd or even. Even Eisenstein with his with his space-time continuum never applied it to mathematics. Zero and infinity both have the same characteristics which should tell you they are the same. I'm not that smart, that's why I'm asking for feedback.

At this point in time all this is theoretical but the bottom line is that at some point it has to be digitalised to make sense and there’s the nub.

My understanding is that the promise/power of quantum computing has to do with its ability to solve more mathematical problems, faster, than a traditional computer of equivalent power. Another is that entanglement can improve signal compression and encryption over long transmission lines. The fact that the computer will, when all computation in finished, eventually spit out a defined string of 0s and 1s, does not obviate these points. How a quantum computer can do more complex math faster, I'm not sure. Maybe someone else can answer that.

Quantum computing will solve issues by setting up a quantum analogue of the problem where the "solution" of the problem is the steady state (or ground state) of the quantum bit in that situation.

This will be faster because it doesn't solve each item in isolation, like physics models do (reductionism), each in turn, nor does it compute iteratively each more successively accurate approximation, as happens with numerical intergration, but "solves" the entire range of possibilities in parallel.

The real REAL big problem is setting up the "program" so that the solution of the program set up will be the solution to the actual question to be solved.

IOW you can either solve the computational results of quantum mechanics of a thousand interacting parts, or you can shine a light at two closely spaced slits and measure the intensity pattern at a distance on the other side.

Which would be quicker?

The double slit experiment is a quantum computing program.