What will it mean if LIGO detects gravitational waves? (Synopsis)

"Einstein's gravitational theory, which is said to be the greatest single achievement of theoretical physics, resulted in beautiful relations connecting gravitational phenomena with the geometry of space; this was an exciting idea." -Richard Feynman

When we look out into the Universe, we normally gain information about it by gathering light of various wavelengths. However, there are other possibilities for astronomy, including by looking for the neutrinos emitted by astrophysical sources -- first detected in the supernova explosion of 1987 -- and in the gravitational waves emitted by accelerating masses. 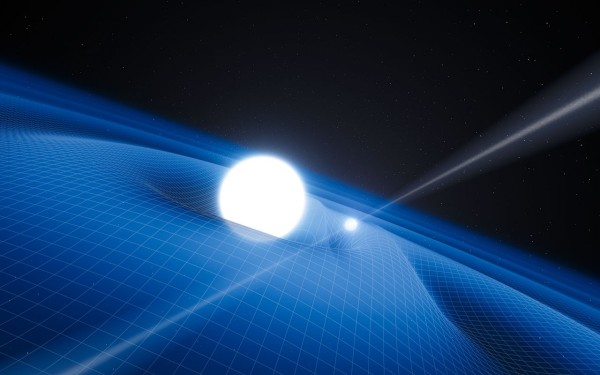 Image credit: ESO/L. Calçada, of a pulsar orbiting a binary companion and the gravitational waves (or ripples) in spacetime that ensue as a result.

These ripples in the fabric of space were theorized back in the early days of Einstein's General Relativity, and experiments to detect them have been ongoing since the 1960s. However, in September of 2015, Advanced LIGO came online, and it was the first gravitational wave observatory that was expected to detect a real gravitational wave signal. The press conference on Thursday is where the collaboration will make their official announcement, and in the meantime, here's an explainer of what gravitational waves are, what Advanced LIGO can teach us, and how. 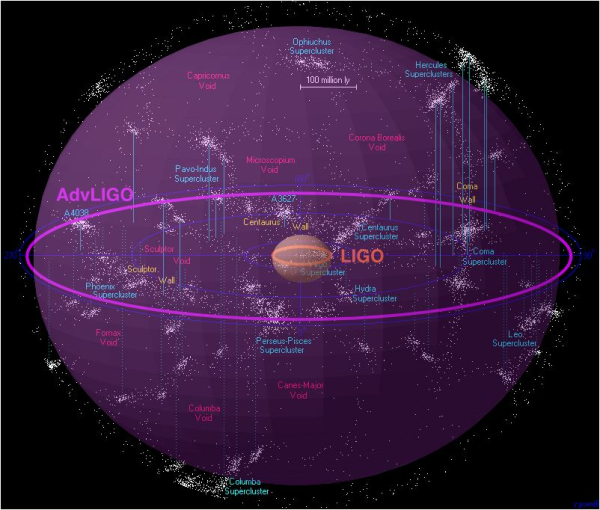 Go read the whole story -- and hope that it comes true on Thursday -- over at Forbes!

Here is what I'm thinking: If space is quantized, then the number of units of space between the emitter and detector is fixed. A gravitational wave rolling through the device would shrink or expand the units of space but not change their count. A beam of light traveling through those units of space travel a fixed number of units per time period. A unit of space-time made slightly bigger or smaller by a gravitational wave is completely irrelevant because to the beam of light only the unit count and time elapsed matter.

Is my thinking flawed?

Will gravity waves be 'red-shifted' in the same manner as photons are?

@ #1, I was wondering something similar. What if this is the gravitational analog of the Michelson-Morley experiment? Could it be that the warping of space by gravitational waves prevents their detection?

Looking at the apparatus, it is not a directional setup in that it can be aimed at a potential source (if exists). Any detection will be totally random, including all sources in the envelope, which will include interference from out of phase (or in phase) wave fronts, methinks.

Being that it would be a wave rolling through the experiment rather than a static field, I would think there would be a tiny redshift followed by a tiny blueshift with the net result being no frequency alteration at all.

Denier, PJ or Gary S. Can you gentlemen elaborate on "The Great Attractor" that I have read about in the media lately?
I did a search in the science blog bar here but nothing really came up that relates.
Here is the article:

If yhttp://www.businessinsider.com.au/weve-found-evidence-the-milky-way-is-…
ou fine folks can help by elaborating on it I would be grateful. TIA..

Can you good people direct me to some more authoritative reading on this " Great Attractor”"?

Hmmm, that was strange - double the comments for one entry. Must be to do with attraction.......

Not sure what is happening here - gave three references before, they appeared as two separate entries. When I returned, both have disappeared.
Sorry Tex, tried to help.
Disregard #11; it 's invalid.

Hey, Tex, just use the words 'Astronomy The Great Attractor in your search. There are some good references there. Perhaps Ethan is already preparing something on the subject . . . .
:)

If gravitational waves are detected by LIGO, doesn’t that mean theoretical models that quantize space-time (like LQG) are incorrect?

IANA cosmologist but AIUI, nope. Real honest-to-goodness waves are quantized (water molecules mostly), as are acoustic waves (molecules again). The 'wave' phenomenon can be (and regularly is) a result of the interactions between quantized particles.

Looking at the apparatus, it is not a directional setup in that it can be aimed at a potential source (if exists). Any detection will be totally random, including all sources in the envelope, which will include interference from out of phase (or in phase) wave fronts, methinks.

It would be nice to have a 'point and shoot' detector sure. But since the earth rotates, careful placement of the detectors can give you a very regular and predictable cyclical view of a specific target. I imagine the biggest constraint was that since LIGO was being built in the US, some southern-sky binaries were not available as targets.

AIUI, the noise problem is at least partially addressed by having two widely separated facilities (Oregon and Louisiana). Just as with using multiple telescopes, this helps the operators eliminate noise originating from local (earthly) or close (in the astronomical sense) sources.