"I'm a fan of supersymmetry, largely because it seems to be the only route by which gravity can be brought into the scheme. It's probably not even enough, but it's a way forward to get gravity involved. If you have supersymmetry, then there are more of these particles. That would be my favourite outcome." -Peter Higgs

The “diphoton bump” at 750 GeV is perhaps the best active signal we have for the possibility of fundamental new particles beyond the Standard Model. While the upgraded LHC should collect enough data that we’ll know by the end of the year whether it looks real or goes away, there are six different possibilities for what it could be if it pans out. 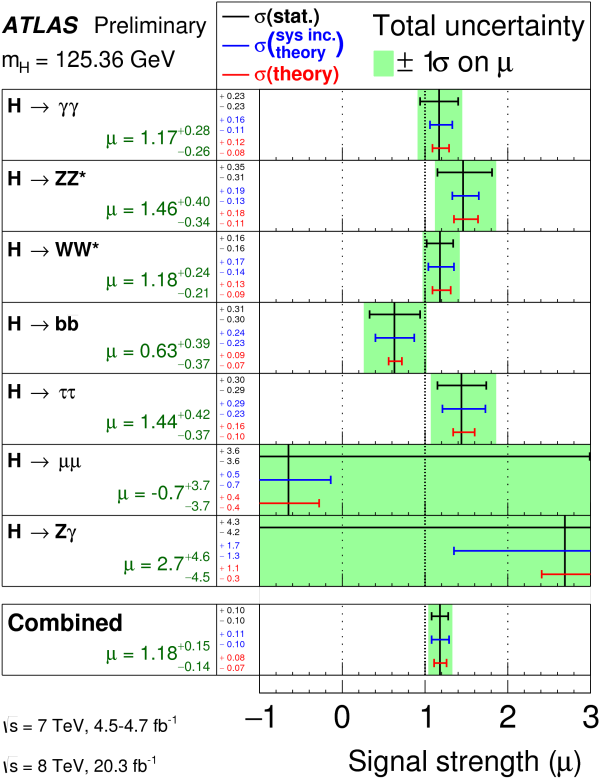 Image credit: The ATLAS collaboration, 2015, of the various decay channels of the Higgs. The parameter mu = 1 corresponds to a Standard Model Higgs only. Via https://atlas.web.cern.ch/Atlas/GROUPS/PHYSICS/CONFNOTES/ATLAS-CONF-201….

They include: a second Higgs, dark matter, extra dimensions, neutrino physics, a composite particle or even a surprise! But don’t get too excited; a similar bump at three times that energy has already gone away, and this one might be next. 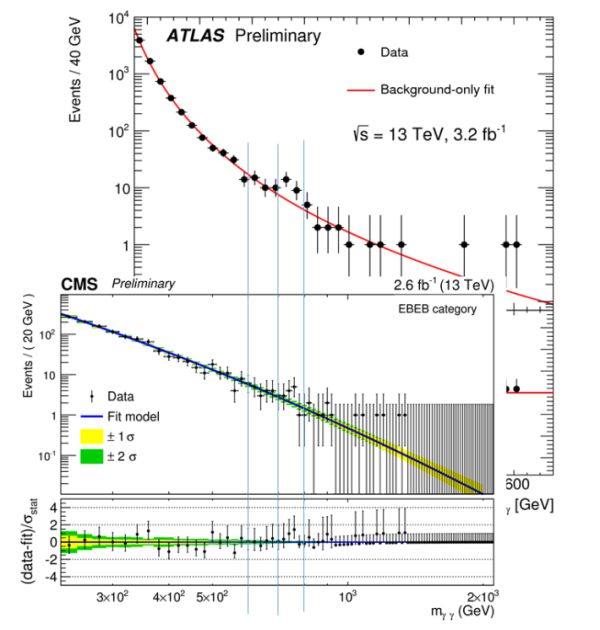 Go get the full scoop over on Forbes!

•“Why is there more matter than antimatter in the Universe?
•What is dark matter, and what particle(s) beyond the Standard Model (which cannot account for it) explains it?
•Why does our Universe have dark energy, and what is its nature?
•Why don’t the strong interactions in the Standard Model exhibit CP-violation in the strong decays?
•Why do neutrinos have such small but non-zero masses compared to all the other particles?
•And why do the Standard Model particles have the properties and masses that they do, and not any others?

And the great hope of the LHC, the real hope, is that we’ll learn something extra, beyond the Standard Model, that helps answer one or more of these questions.”

Ethan, given the great hope of the LHC, the real hope, is to answer one or more of the above questions, do you think we should have more LHC-type facilities?
With several LHCs they could probably conduct several times more experiments and have several times more chance of finding those elusive “elves”.

How many more billions of dollars would you, as opposed to most other people, like to see spent on these vital questions?

The stupidity, it burns.

The CERN/LHC costs of finding the Higgs Boson were about $13.25 Billion.

How many more billions of dollars would you, as opposed to most other people, like to see spent on these vital questions events?

What does 'diphoton bump' mean? I can break down that it is something to do with two photons that caused a signal bump at 750 GeV on a graph, but that doesn't help. Is it that a particle was formed that quickly decayed into a pair of photons totaling 750 GeV in energy?

In trying to find the answer to my question I came across a list of possibilities of what the mystery thing is and my favorite candidate is Squarkonium-Diquarkonium. I have no idea what it is but want to see that awesome name on the charts.

@Denier #4: Particle physics detectors can only record information about stable or nearly stable particles (those with lifetimes long enough to travel tens or hundreds of meters).

We distinguish charged from neutral particles because the charged ones can leave a trail of ionization through a solid state (e.g., CCD) or gaseous detector (e.g., a drift chamber). Putting those into a magnetic field caused them to follow curved (helical) paths, and we can measure the radius of curvature to get the momentum.

Both charged and neutral particles can deposit energy in calorimeters, where we measure both the amount of energy, and the location where it was deposited. Combining all of this information and more, we get a list of the stable particles in each event, with their mass, momentum vector, and energy.

We identify short-lived particles which decayed by picking out their decay products from that list, summing up their momentum-energy, and getting the mass and charge of the particle which decayed. Of course, we don't know which combination is right a priori, so we have to make "all" combinations and look for a statistical excess at the mass of some short lived particle.

This is what the "diphoton bump" is. If you take the LHC data, and in each event look for two high energy photons (above 300 GeV each), then calculate the sum of their mmomentum-energy, you can make a plot of the mass from all of the pairs (diphotons) you picked.

If those photons all came from different sources, there'd be no correlations, and the mass distribution would be an exponential, with very few events at high mass, and more events at low mass. What the LHC folks actually see is just that exponential distribution, but with a "bump" superimposed on top of it, at a value of about m = 750 GeV or so, and a width of 50-100 GeV.

The statistical significance of the bump is really low, just a few sigma (a "P-value" of about 0.05), so it is probably just a random fluctuation, or some unexpected detector effect. But if it is real, then there is some kind of short-lived particle, with a mass of around 750 GeV, which decays to two gammas.

Since we don't even know if the signal is real, it's really too early (except for theorists :-) to speculate on what kind of particle it is.

"What does ‘diphoton bump’ mean?"

A ound state of two photons (much like a proton could be called a "tri-quark bump".

Are those waves and/or particles that the LHC is detecting? For instance for a photon we can record a point at one specific spot, a wave we can sense at multiple detection points.

No and yes. They're not either waves or particles, they're what they really are, and our detection of them defines which features we get to discern.

"Waves at a specific point" is meaningless unless you're talking about a wave in some abstract medium. There are no points in waves, only the wave.

For the double slit it are multiple points that represent the wave so ... how would this relate to what's being detected at the LHC? Photons and radio waves have an amplitude ... I guess i have read a little more about how the dectors work.

Paul: "a detection" in the LHC functions like putting a detector next to the slit in a Young-type double-slit experiment; it eliminates the wave-like behavior of what you're trying to detect.

I guess i have read a little more about how the dectors work.

After S.N.'s failure to understand what an "inverse femtobarn" is, I was thinking about posting a blast from the past, but I held off. Paul has reminded me of it (PDF).

@Paul Dekous #10: The multiple detection points on the screen of a double-slit apparatus do NOT "represent the wave." They represent the interference pattern from two separate waves, one from each slit.

You should read about
-- solid state tracking detectors
-- drift chambers
-- electromagnetic crystal calorimeters
-- sampling hadronic calorimeters
-- resistive plate chambers
Each of those terms should be Wiki-able at best, or Google-able at worst.