How Did We Fool Ourselves Into Believing In A New Particle That Wasn't There? (Synopsis)

“The first principle is that you must not fool yourself, and you are the easiest person to fool.” -Richard Feynman

Like many suggestive signals in the past, the 750 GeV bump in the diphoton channel has turned out to be a mere phantasm: an unlikely statistical fluctuation that simply disappeared as more data was collected. While almost the entire particle physics community was hoping for a different outcome, this is apparently the Universe we were dealt. 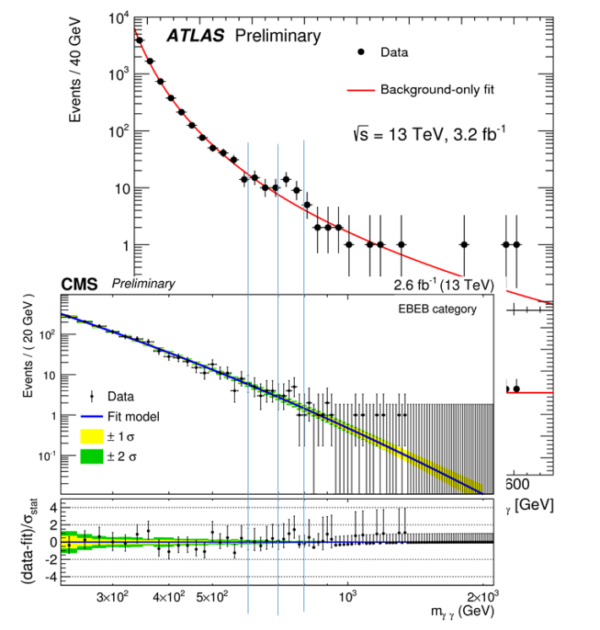 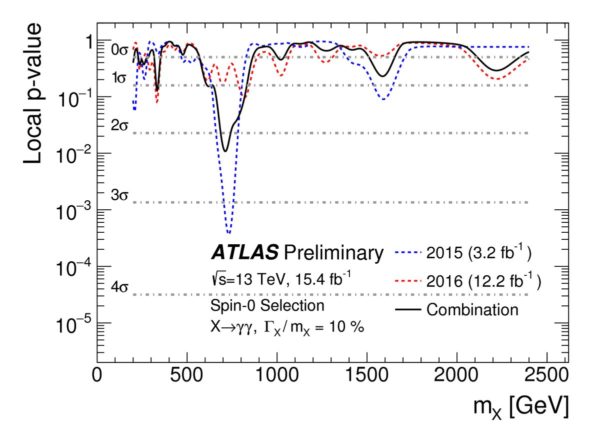 That's what happened here. Come get the story and find out how we fooled ourselves!

If the LHC was creating new particles other than the ones already in the Standard Model, but those particles were sterile, would we know?

In the past I've heard claims that it would be detectable by seeing less mass come out than what went in, but I'm not sure that is true. It isn't one proton being accelerated but rather, at least in the LHC, ~3000 bunches each containing ~100 Billion protons. As the beam and counter beam are crossed you get roughly 600 Million collisions per second.

If you need tons and tons of data to discern statistical flukes from real particles, and sterile neutrinos or other dark matter particles being produced in the collisions weren't interacting with the detectors, would we know? Can we measure how much is going in versus how much is coming out?

What they're doing is something like making waves in water, the more energy they put into the system the higher the waves and thus the enrgy that comes out of it. But as the energy increases at some point a wave might break. (In fluid dynamics, a breaking wave is a wave whose amplitude reaches a critical level at which some process can suddenly start to occur that causes large amounts of wave energy to be transformed into turbulent kinetic energy.) This is the bumb in the graph of the LHC. The breaking wave is a new particle, a splash, and they can study it what smaller waves, parts, that splash dispers, to study what kind of splash it is. Unless there is no new splash detected there is nothing new.

The question I would like to raise is that when there are ships floating on the water, that as the waves get higher, and far more frequent, that they might get under a lot of strain, as they absorb some of the energy of those waves, and that they would start to splash/break apart?!

What you really get are 600 million _beam_crossings_ per second. Not every beam crossing results in a collision. The vast majority are simple elastic scatters, where one proton from each beam is deflected at a small angle, but nothing else happens.

Next in line are "minimum bias" events, where two protons collide at a large impact parameter (think "grazing incidence") and you get a spray of mostly pions in a cone around the beam directions.

The really interesting events occur maybe a million times per second, which is sufficent for the trigger system to identify and record data from each one individually.

There are layers of data filters which can sort these events into different categories, depending on what's observed. It is possible, and is a significant part of most analyses, to reconstruct all of the momentum and energy seen in the detector, do the vector sums, and work out both if there is missing energy and what direction it points.

Of course, that missing energy may not be due to a single particle, but can just be the vector sum of, for example, several high-energy neutrinos.

Denier,
Not sure what you mean by "sterile." Do you mean what happens if it produces particles that don't interact with the detectors (or at least, not as expected)? In that case, yes it would be difficult to understand exactly what happened, though the experimenters could still detect that something unexpected happened (via finding missing energy etc. as Michael points out). This would be an interesting and useful result; Pauli's proposal of the neutrino basically came about this way. Many experimenters before him had observed that beta decay showed a smooth energy distribution (which was not predicted), with all detected electrons having energies well below what should have had (also not predicted). Early on, a lot of scientists just figured the electrons were losing an unexpectedly large amount of energy before they hit the detectors, but Pauli pointed out that both of these phenomena could be explained if some additional particle that didn't interact with the detectors was carrying away the excess energy. Using what they knew about what was missing from the spectra, he figured out the required spin and charge of the neutrino, and that the mass would have to be very small. Which lead the way to other experiments that showed him to be correct.

So if these LHC reactions were to produce 'sterile' particles that didn't interact with the detectors, I think particle physicists would be very happy with that result. Challenged, yes, but happy.

Thanks. I did not realize the data gathering ability could work that quickly. Truly amazing machines.

What I mean by "sterile" is 'does not interact via the electromagnetic, strong nuclear, or weak nuclear force' A.K.A. 'Dark Matter'. Specifically I was asking about the production of the seesaw-heavy, right-handed sterile neutrino, and if we had the ability to detect such a particle.

“When we announced the discovery of the Higgs boson some 4-5 years ago, we had reached a significance threshold of 5σ, which has “fluke” odds of less than one-in-a-million. That threshold has been the gold standard for discovery ever since the 1970s…”

What is the sigma up to for the existence of dark matter and dark energy?

What is the sigma up to for the existence of dark matter and dark energy?

There was no particular need for you to make a show of demonstrating that you don't understand the basic concept.

^ Although if you insist, here is 4.4 σ for the late-time integrated Sachs–Wolfe effect.

Especially if there is a seesaw mechanism so that right handed neutrinos have a mass ratio to left handed ones, we don't know what was produced. We could have been making Dark Matter at LHC and not known it even if we can see mass going in versus mass coming out. Right?

you should be able to figure out how much of the missing stuff would be rest mass vs. kinetic energy, based on the particles you do detect.

Doesn't E=mc^2 make one exchangeable for the other?

Doesn’t E=mc^2 make one exchangeable for the other?

Yes, but the system overall still has to obey conservation of momentum, which puts constraints on the mass and kinetic energy of the 'missing' stuff. If you convert mass to energy (exoergic reaction; your word for the day), the product particles must have a higher kinetic energy to make up for it.

“The total reaction – including the missing stuff – must obey conservation laws…”

It's all explained over here:
https://profmattstrassler.com/articles-and-posts/relativity-space-astro…

To everyone who is trying to respond to S.N.

Don't bother. He is very obviously a troll and feeding him will not solve anything. Just leave his posts unanswered.

Thanks for the link. The picture is much more clear now.

Don’t bother. He is very obviously a troll and feeding him will not solve anything. Just leave his posts unanswered.

As I've pointed out before, I'm immune from "feeding" him, as I've been "added" to his brain-dead "No Fly/Do Not Call list" from RI.

Observe its habits more closely. The cravenness is a feature, not a bug.

Here’s a subject for a potential future article of yours –
The Principle:
http://www.breitbart.com/radio/2016/08/10/filmmaker-rick-delano-the-pri…

There's nothing like ignoring replies to one's preceding comment in favor of barfing up some movie plug from Breitbump that says thought.

"Doesn’t E=mc^2 make one exchangeable for the other?"

But momentum isn't conserved if you just parcel out the energy. You have to conserve BOTH at the same time.

If conservation of energy were all that was required, a Newton's Cradle would operate much differently: throwing two balls could cause ONE ball to swing from the other end at twice the speed (2mv=m2v), or two balls at different velocities, or three balls, or bouncing of the original pair and a different speed of the remainders.