"The cosmic game changed forever in 1992. Before then, logic told us that there had to be other planets besides the nine (if you still count poor Pluto) in our solar system, but until that year, when two astronomers detected faint, telltale radio signals in the constellation Virgo, we had no hard evidence of their existence." -Thomas Mallon

For generations, if you wanted to know what the surface of the outermost known object in our Solar System -- Pluto -- looked like, you had to rely solely on your imagination. Sure, it was probably covered in ice, and large enough to pull itself into a sphere, but beyond that, little was known. Even with the Hubble Space Telescope, little detail could be made out; the best resolution was still hundreds of kilometers per pixel. 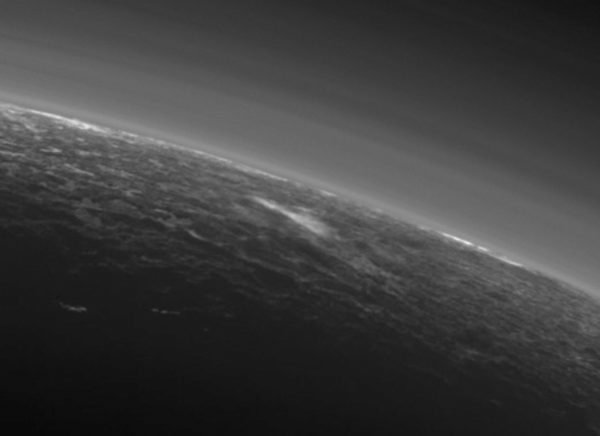 The dark (night) side of Pluto, showcasing layers of atmospheric haze and possible low-lying clouds (foreground) nearer to the surface. Image credit: NASA/JHUAPL/SwRI.

That all changed in 2015, when the New Horizons spacecraft flew by Pluto for the first time. Reaching a minimum distance of just 12,500 km from this world, we were able to image large parts of its surface and atmosphere at resolutions of 80 meters (260 feet) per pixel. What we discovered was a diverse, rich world as geologically interesting as any planet we've ever found.

Go get the full story in pictures, video and no more than 200 words on today's Mostly Mute Monday!

"This is in a real sense the capstone of the initial missions to explore the planets. Pluto, its moons and this part of the solar system are such mysteries that New Horizons will rewrite all of the textbooks." -Alan Stern The New Horizons mission surprised everyone last July when it revealed Pluto…

"We've learned that the view of four inner rocky planets and four outer gas giants and one misfit Pluto is wrong. Now we understand Pluto's context." -Alan Stern After a 9 year journey to Pluto, NASA's New Horizons spacecraft made its closest approach to Pluto this past July, taking so much data…

“It used to be that Pluto was a misfit. Now it turns out that Earth is the misfit. Most planets in the solar system look like Pluto, and not like the terrestrial planets.” -Alan Stern The combination of New Horizons and Hubble to work together allow us to create the longest-baseline parallax images…

This is a spectacular display of the old “Faster-Better-Cheaper” mission philosophy. New Horizons came in under $800 million. Kepler, even with its ongoing study, is still under a total of $600 million. The Opportunity rover is at roughly $400 million.

All of those combined plus the $700 million dollar Spitzer Space telescope are less than the $2.5 billion dollar Curiosity rover with its wheels falling off.

Greg Laden has a new post titled “Ethan Siegel on the Universe” in which he apparently interviews you about Dark Matter, among other things. Perhaps Dark Energy is also brought up. This got me thinking.

In an article titled “Why is the universe expanding 9 per cent faster than we thought?”, I read
“The situation has many physicists, including Riess, excited. It could mean that dark energy is growing denser over time, and the universe will eventually end in a catastrophic “big rip“. It could mean Einstein was wrong, requiring changes to his well-tested theory of relativity. Or it could invoke a shady new particle secretly pulling the universe’s strings.”
https://www.newscientist.com/article/2091933-why-is-the-universe-expand…

How would energy grow “denser”?

If Dark Energy is changing (e.g. growing “denser”, or growing stronger), what if anything would this mean for the law of the conservation of energy?

P.S.
I would have posted this on Greg Laden’s blog, but he banned me a while ago.

"I would have posted this on Greg Laden’s blog, but he banned me a while ago."

Why would you even visit that idiots blog?
Besides being a leftist libtard he has to be the UGLIEST Blogger on Science Blogs.
That dude fell from an ugly tree and hit EVERY branch on the way down. He looks like a freakazoid.

THAT GOOFY LOOKING "Greg Laden has a new post titled “Ethan Siegel on the Universe” in which he apparently interviews you
Q.E.D."

There Narad, I fixed it for ya..
Also as a side note. Good Member See Noevo already mentioned it in post # 3

"I would have posted this on Greg Laden’s blog, but he banned me a while ago."

You keep saying that but offer no proof. Without that it can safely be assumed that it is simply another of your lies. (rag, you are rapidly approaching sn as an equal in the category of stupidity and dishonesty. keep it up.)

"(rag, you are rapidly approaching sn as an equal in the category of stupidity and dishonesty. keep it up.)"

"All of those combined plus the $700 million dollar Spitzer Space telescope are less than the $2.5 billion dollar Curiosity rover with its wheels falling off."

However, spending even more on the earlier missions to Mars produced a vehicle that is more robust.

Maybe the difference isn't the cost, but the effort spent in making the cost effective and ignoring being "cost effective", which would tend to lead to cutting corners under the *expectation* that these edge cases aren't important.

IOW if we'd spent more on curiosity, would we have a BETTER system that would have produced more evidence per dollar because we didn't try to pinch pennies?

"“I would have posted this on Greg Laden’s blog, but he banned me a while ago.”

You keep saying that but offer no proof."

We also neither know, nor care, nor even know what it is that this "factoid" is supposed to impart. It certainly doesn't add anything to the claim other than a whinge about how someone else's property is not being put at this idiot's beck and call.

Teabagger, HE DID READ IT.

And the conclusion made was 100% supportable by the contents of it.

I have read it rag. Your little ejaculation at 7 just supports my point.