Ask Ethan: Does Earth really have a second Moon? (Synopsis)

"You can be the Moon and still be jealous of the stars." -Gary Allen

Earlier this week, NASA announced the discovery of Asteroid 2016 HO3, calling it Earth’s second moon. And it turns out that this is an object in a stable orbit, the same distance from the Sun as the Earth, that can be found revolving around our world at a distance between 38 and 100 times the distance from us to the Moon. 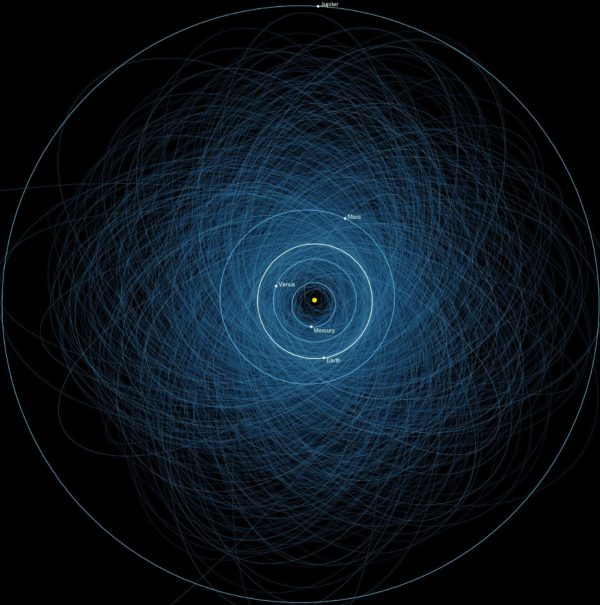 The orbits of all the known Potentially Hazardous Asteroids, as of 2013. This includes asteroids that have been gravitationally captured by the Earth-Sun system. Image credit: NASA/JPL-Caltech.

But that isn’t exactly the same as having a second Moon! In order to be considered not just a natural satellite but a stable one, you need to remain orbiting your parent world for a long period of time, not just tens, hundreds or thousands of years, like a transient quasi-satellite. Despite its current orbital characteristics, this object is much more akin to the multiple Trojan asteroids orbiting with our world than anything we’d consider moon-like. 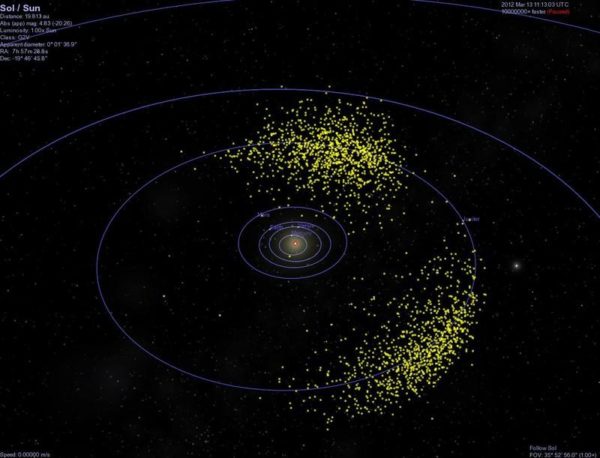 A model of the Trojan asteroids around Jupiter, using Celestia. Image credit: Guillermo Abramson, via http://fisica.cab.cnea.gov.ar/estadistica/abramson/celestia/.

Go get the full story on all of our so-called “second moons” on this week’s Ask Ethan!

“Does Earth Really Have A Second Moon?”

I don’t know how you manage to sleep at night, Ethan,
what with all these “earth-shaking” questions occupying your mind.
(Or do you sleep in the day, and come out only at night? Like … )

But getting closer to home, down-to-earth, so to speak,
do you like theories #1 & #5 best?
They both seem to involve hypotheticals that were literally *earth-shaking*:
http://csep10.phys.utk.edu/astr161/lect/moon/moon_formation.html

See Noevo is a pseudonym for Cyril the Cynic. Take no heed of his cheap jibes. He has felt the need to insult and humiliate people for as long as the web exists.

Apparently Earth hasn't cleared its orbit. We are living on a dwarf planet, I suppose.

No, carl, just because you haven't a bloody clue what you're talking about, this doesn't mean your ignorance is right.