Could Dark Energy Be Caused By Frozen Neutrinos? (Synopsis)

"If you're puzzled by what dark energy is, you're in good company." -Saul Perlmutter

The accelerated expansion of our Universe was one of the biggest surprise discoveries of all-time, and something that still lacks a good physical explanation. While many models of dark energy exist, it remains a completely phenomenological study: everything appears consistent with a cosmological constant, but nothing appears to be a good motivator for why the Universe should have one. 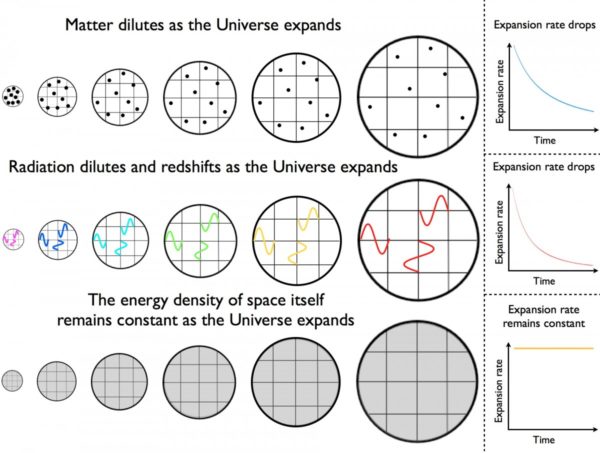 Until now, that is! In a new paper by Fergus Simpson, Raul Jimenez, Carlos Pena-Garay and Licia Verde, they note that any generic scalar field that couples to the neutrino sector would dynamically and stably give rise to a type of dark energy that's indistinguishable from what we've observed. The huge advance is that this scenario doesn't require any fine-tuning, thanks to this dark energy arising from neutrinos "freezing," or becoming non-relativistic. 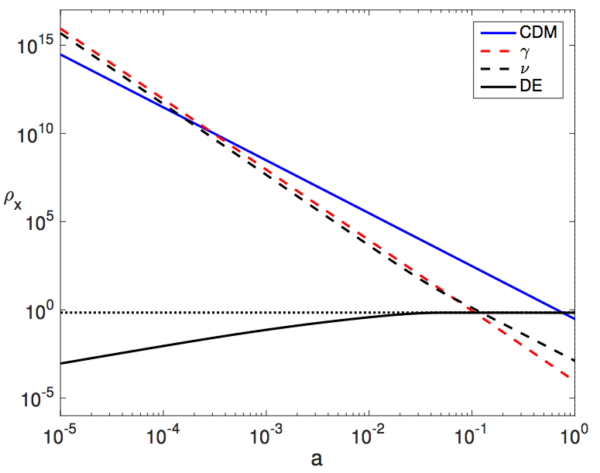 An illustration of how the radiation (red), neutrino (dashed), matter (blue), and dark energy (dotted) densities change over time. In this new model, dark energy would be replaced by the solid black curve, which is heretofore indistinguishable, observationally, from the dark energy we presume. Image credit: Figure 1 from F. Simpson et al. (2016), via https://arxiv.org/abs/1607.02515.

In addition, there are experimental signatures to look for to confirm it, too, in the form of neutrinoless double-beta decay! Go get the whole story on this remarkable new idea over on Forbes today!

I'm still fuzzy on exactly what a 'Frozen Neutrino' is.

If that is right then all neutrinos would be non-relativistic because all of them have a non-zero rest mass. A neutrinos weight is tiny and they move really really fast but their speed is still not quite c.

Am I missing something here or are all neutrinos 'Frozen Neutrinos'?

I think your notion of the term "relativistic" is not the standard one. I believe that relativistic means that a particle has a total energy much higher than its rest energy, ie. mc^2. In practical terms, a relativistic particle is one that travels at an appreciable fraction of c. Neutrinos in normal circumstances certainly qualify as relativistic.

I think I got it, but seeing as neutrinos can travel through a light-year of lead, how do you slow one down to 'freeze' it?

Follow up question: If this theory was correct, wouldn't Dark Energy be stronger in the regions where neutrinos were being frozen versus 'neutrino fly-through country'?

Very exciting!
You mention a few times that this proposal can be experimentally confirmed. Is this something that the LHC can look for? You have written previously about higher energy colliders (with the culmination being space-based colliders 1AU or more in diameter). There's a Wikipedia entry for a Future Circular Colider with 100km circumference and 100TeV energy ranges; could that be enough to detect the neutrino less double beta decay, or is it too early in the theory development to design the experiments and necessary equipment?
Also, this is kind of a throwaway question, as I'm probably just not understanding it correctly; would a neutrino interacting with this field change speed as it becomes 'frozen' with the scalar field, or would the neutrino kind of disappear as its energy is absorbed by the scalar field?

@Denier #3
As a non-expert, my thoughts on your questions:
1) I imagine each neutrino would have a probalistic chance of interacting with the scalar field, possibly depending on its speed and direction of travel.
2) As above, assuming the theory is correct, I doubt there would be regions of space where more or less neutrinos were interacting with the scalar field, given how uniform the constant appears to be throughout space. Perhaps the rate would increase as the universe ages, but that should be the same in each region.

@Denier #3: Relativistic vs. non-relativistic is what Sean T described. You can also express it more simply in terms of the particle's velocity. Recall that the relativistic "boost" factor gamma = 1/sqrt(1-v^2/c^2). If v is so much smaller than c that you can ignore v^2/c^2, then gamma ~ 1 and relativity simplifies to just regular Newtonian mechanics (velocities add, no Lorentz effects, etc.).

The neutrinos which are being discussed in Ethan's post and in the original research paper are "relic neutrinos." These were created (in particle-antiparticle pairs) in the very early universe, just like everything else. They started out at extremely high temperatures (just like the photons, quarks, etc.), hence energy, hence velocity.

At a point earlier than the photons, the neutrinos _decoupled_ from interacting with matter (this isn't magic, it just means that the density dropped to the point where the average distance a neutrino would travel between interactions became much, much larger than the average separation between particles).

Once they decoupled, the neutrinos behaved, in the context of expansion, just like photons. They "free streamed" through the universe, and cooled by having their wavelengths stretched by the expansion. Today, those relic neutrinos should be at a temperature of about 1.95 K (lower than the CMB because they decoupled earlier). That corresponds to an energy of about 0.2 meV (_milli_ eV). Their average spped is around 0.001 c, which is pretty non-relativistic (see above).

That is a great explanation. I totally get it. A "Frozen Neutrino" is frozen not because it is still or not aging, but because it is cold (low energy from existing billions of years in expanding space).

"I think I got it, but seeing as neutrinos can travel through a light-year of lead, how do you slow one down to ‘freeze’ it?"

Actually, no need to.

Change to an inertial frame where the neutrino is at rest and suddenly it's slowed down. IOW catch up to it and done.

Now imagine a neutrino source (say a star) that is retreating at nearly light speed from us. In OUR frame of reference, how fast is that neutrino going? Fast or slow? If slow, how did it get slowed down without traversing light years of lead?

By the way, I don't go to Forbes.com -- they embody the worst aspects of the capitalist web, with excessively intrusive, obnoxious ads that are hard to distinguish from malicious ones, stories broken into tiny pieces in order to artificially raise page views, and who knows what else. How about a link to the actual article by Simpson et al., or is that paywalled too? An arXiv link, maybe?

@Wow #8, You're quite right in your description, but that doesn't really address Denier's question, which is how _cosmological_ neutrinos (as described in Ethan's post and in the underlying paper) get "frozen" (or slowed to non-relativistic speeds).

It's not enough to ask how can we see a slow neutrino in _our_ frame. The proper question is how can otherwise presumably relativistic neutrinos be made "frozen" (slow, non-relativistic) in the average rest frame of the universe, otherwise known as the CMB frame.

"@Wow #8, You’re quite right in your description, but that doesn’t really address Denier’s question"

Aye, but the question arose from a non-thinking assumption of personal definition being confused for a global one.

IOW if Denier had dropped the idea of "absolute frames of reference" in the silent imagination of what "near the speed of light" means, then the question WOULD NOT EVEN ARISE.

Or, if it had, it would arise in a formulation that actually had something useful to illustrate about the situation, rather than indicate a failure of thought on the querant's behalf.

Neutrinos released by stars with their light redshifted at 13 billion light years distance from us by the expansion of the universe would also be redshifted by the same process, Michael, therefore your statement:

Is likewise a failure on your part to think this through.