How certain are we of the Universe’s ‘Big Freeze’ fate? (Synopsis)

The discovery of the accelerated expansion of the Universe -- and of dark energy behind it -- in 1998 was one of the biggest physics revolutions of our lifetime. By measuring these distant galaxies and how their distances and redshifts scale in the Universe, we were able to determine that despite everything we knew about matter and radiation, there was an additional force at play, and it caused distant galaxies to accelerate away from us. 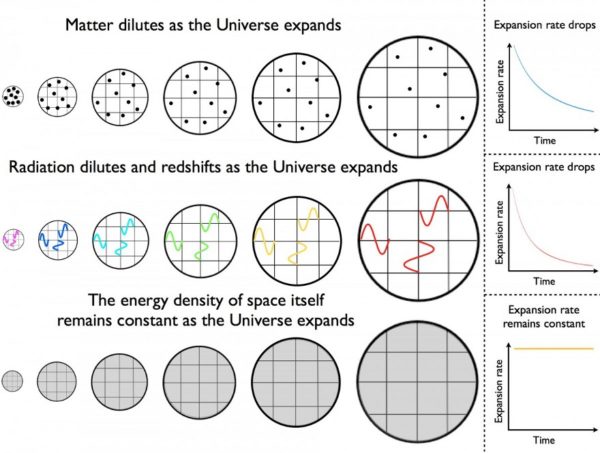 How matter (top), radiation (middle), and a cosmological constant (bottom) all evolve with time in an expanding Universe. Image credit: E. Siegel, from his book, Beyond the Galaxy.

The data is now good enough to determine that dark energy is extremely close, if not identical, to the predictions of a cosmological constant. But there are still other theoretical possibilities that are admissible, even if they aren’t favored. Perhaps in the coming decades, we’ll find out that the ‘Big Freeze’ isn’t necessarily where we’re headed in the distant future? 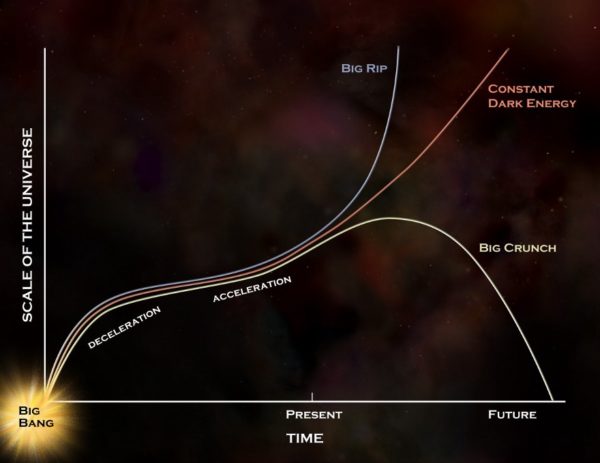 The different ways dark energy could evolve into the future. Remaining constant or increasing in strength (into a Big Rip) could potentially rejuvenate the Universe. Image credit: NASA/CXC/M.Weiss.

We've got a lot of confidence in how far we've come, but a Big Crunch, a Big Rip, and a Cyclical scenario are all still in play!

You wrote "Neutrinos first act like radiation (a-4) and then like matter (a-3) once the Universe cools past a certain point." I would love to see further discussion of this process and how it happens.

@Glen Martin #1: The transition occurs only for massive neutrinos (the kind we have in our universe). For E >> m, the neutrinos are relativisitic (p ~ E), and you treat their energy density in the same way as photons: as the universe expands, their wavelength and number density both reduce, which gives the a^-4 dependence. If m_nu == 0, that remains true forever.

But in our universe, m_nu > 0, so at some point you reach E_nu ~ m_nu, or equivalently, E_nu(kin) < m_nu, p ~ mv. At that point, the neutrinos have so little kinetic energy that they start to behave cosmologically the way dust and atoms behave: they just bounce around locally like a gas, and as the universe expands around them their number density drops. This gives an a^-3 dependence.

@Michael Kelsey: Thanks for the clarification. Greatly appreciated.