The Multiverse for non-scientists (Synopsis)

"Go, then. There are other worlds than these." -Stephen King

We think of the Universe as all there ever is, was or will be. But, in fact, there's a limit to the most distant galaxies, stars, matter and radiation we can see. The hot Big Bang occurred a finite amount of time ago, and hence the amount of the Universe accessible to us through any observational means is necessarily limited. 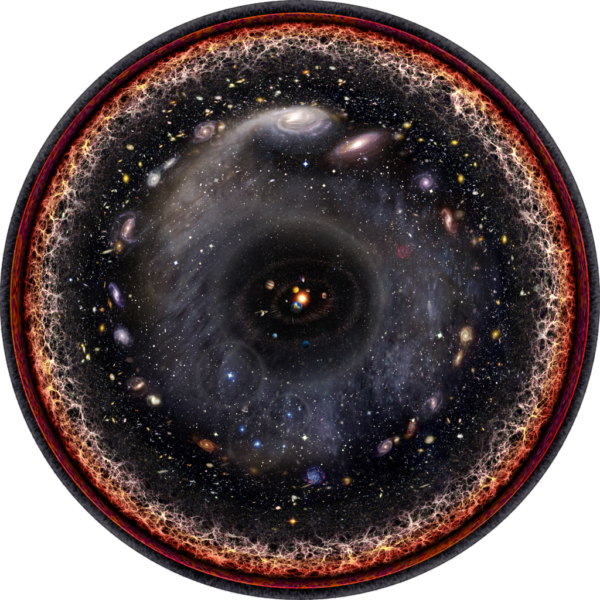 What lies beyond that? According to our best explanations and theories, there's more Universe. But beyond that, the combination of cosmic inflation and what we know about quantum field theory indicates that there are multitudes of individual pockets that contain entirely disconnected Universes, each beginning with their own Big Bang, some of which may even have different fundamental laws and constants from our own.

Where the red Xs are, inflation comes to an end and we get a Big Bang, but there are more regions where inflation continues onwards (no X) than where it ends, and hence we get ongoing, unrelated Big Bangs. Image credit: E. Siegel.

Go find out what the Multiverse is, why we think it exists, and what it does and doesn't do over on Forbes today!

10^91!!! That is a lot, but it is a minuscule number compared to the 10^500 stable vacua states in the string theory landscape. When I first read that number I simply couldn't wrap my head around it, but now I have a new standard candle. There are more possible solutions than there are particles in the universe by a long, long, loooooong margin.

When the numbers get that high, what even is the point of counting?

“… rather than continuing to push on the science, it may be best to ask about the unspoken philosophies supporting that research effort.
… These physicists feel our study of the cosmos has been taken too far from what data can constrain with the extra “hidden” dimensions of string theory and the unobservable other universes of the MULTIVERSE. Of course, there are many scientists who continue to see great promise in string theory and the MULTIVERSE. But, as Marcelo and I wrote in The New York Times last year, it all adds up to muddied waters and something some researchers see as a “CRISIS IN PHYSICS.”
Smolin and Unger believe this CRISIS IS REAL — and it’s ACUTE. They pull no punches in their sense that the lack of empirical data has led the field astray. As they put it:
“Science is corrupted when it abandons the discipline of empirical validation or dis-confirmation. It is also weakened when it mistakes its assumptions for facts and its ready-made philosophy for the way things are.””
http://www.npr.org/sections/13.7/2016/06/28/483805061/has-physics-gotte…

You just cannot say that there is are incomprehensible random laws (or maybe lawlessness) to the Multiverse as there will be many similar type Standard Model 4D Universes generating in the ~ 10^500 spectrum. Other Universes will be abstruse and may have different laws which we will never know. So our interest is in our type of Universe and we want to know how those laws are determined and operate. The maths and physics might be the same such that the laws in the other Universes are the same as well in our type of Universe, just different parameter values. The question then for our type of Universe or Universes is how are the fundamental constants and particle masses set and this will determine if gravity is too strong or too weak where stars either burn too fast and elements are not diverse (or create black hole dominance) or stars never form at all. Even with the Multiverse there will be explanations that will not be destroyed by perceived overiding randomness. Rational thought will win out over dismay.

"you get a total of around 10^91 particles in our observable universe. "

You get about 10^80. Even if the dark matter were similar to the baryonic stuff in individual mass, you'd get 10^81. Typo?

You have misremembered several things here.