The most dangerous object known to humanity (Synopsis)

“Honestly, if you're given the choice between Armageddon or tea, you don't say 'what kind of tea?” -Neil Gaiman

Enjoying the Perseid meteor shower this year, as perhaps you do every August? As you look up, the great cosmic show might have a lot more to offer than mere streaks of light, due to cometary debris brightly burning up in the Earth’s atmosphere. This year, Jupiter has slightly disturbed the debris stream, resulting in an increase in the number of meteors-per-hour, as the stream passes quite centrally through Earth’s location. 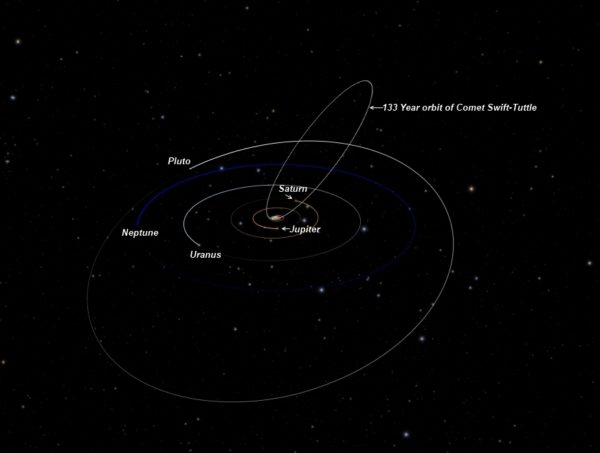 The orbital path of Comet Swift-Tuttle, which passes perilously close to crossing Earth's actual path around the Sun. Image credit: Howard of Teaching Stars, via http://www.teachingstars.com/2012/08/08/the-2012-perseid-meteor-shower/….

Someday, unless we continue to get lucky, Jupiter just might have that same effect on the comet that spawned the Perseids: comet Swift-Tuttle. Only, instead of an enhanced shower, we’d get struck by this comet. With a top speed of 60 km/s and a size of 26 km in diameter, this would result in an impact 28 times more energetic than the impactor that wiped out the dinosaurs. 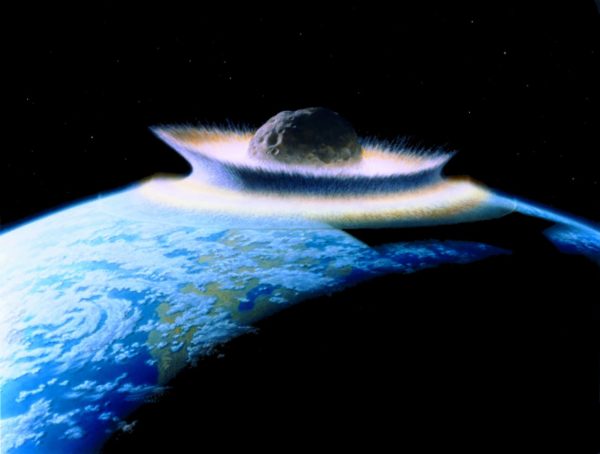 A planetoid colliding with Earth, analogous (but larger and slower-moving) than an impact between Swift-Tuttle and Earth would be. Image credit: NASA / Don Davis.

Comet Swift-Tuttle is the single most dangerous object known to humanity. Come enjoy our continued existence and learn about our possible future demise, while you still can!

Does the "Producer" column show the discoverer, individual or otherwise? I expect 'Otto Matic' is a play on words and those objects were found by some sort of automated search algorithm.

I was always of the opinion that humans are the most dangerous thing to humanity :)

@3: that was my gut response too, however we are not a 'single object' in the physical sense.

We're certainly the most dangerous thing to Swift-Tuttle if it decides it wants to tangle 2000 years or so down the line. That rock might find we've booked it an all expense paid trip to the middle of the Sun.

As far as being dangerous to ourselves, if inventing an AI that ends up killing us is our fault then I'm on board with giving us the top spot. If only direct danger counts then I'm giving it to AI.

@5. Thats a pretty massive rock, and deflecting it wouldn't be easy/cheap. If it came down to having to nudge it, we would probably only nudge it enough to kick the can down the road a few thousand years.

WE can't determine the orbit over a very long period of time, comets liberate gas/dust, and those jets subtly change the orbit the details of the delta V won't be predictable ahead of time, ie. the future orbit cannot be computed far into the future.

If nudged at the right point, you don't have to nudge it very far. The stability of its orbit comes from an 1:11 orbital resonance with Jupiter. It the resonance was fouled in the right way we could get Jupiter to do the heavy lifting for us. If it comes down to it or us, my money is on us.

Maybe billiard-wise we can nudge a smaller comet more easily and make it smash into this one somewhere further down the road.

BTW humans have made the atom-bomb would that be the end-station of converting matter into energy, or could we dig deeper if we find some new physics?

I thought you were going to lead into saying that Jupiter was the most dangerous object known to humanity, since it could fling any comet that wanders into the inner solar system at Earth.