“These galaxies are among the most massive galaxies in the universe and are believed to have rapidly formed their stars a long time ago. However, how these galaxies formed and why have they stopped forming new stars remain mysteries.” -Tao Wang, lead author on this new study

There was once a time early on in the Universe where there were no stars, no galaxies and no clusters of galaxies at all. While stars and galaxies form very early on, after only tens or hundreds of millions of years, it takes billions of years for the first clusters to form. Yet even if we were to look back into the Universe’s past up to ten billion years, the clusters we see are already well-evolved and quiet. 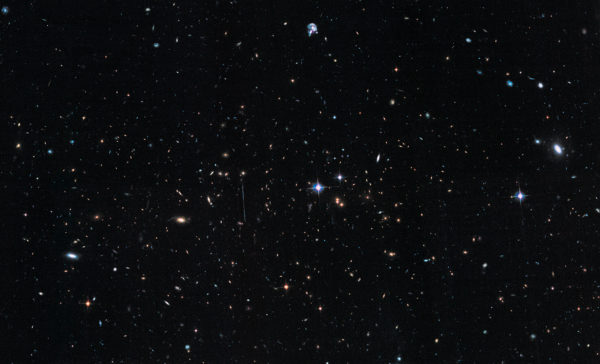 We had never seen a set of galaxies fall in and actively form a cluster before. We’d never seen the protocluster/cluster transition before. And we’d never found one from when the Universe was between two and three billion years old: when our dark matter theory predicts the first great clusters ought to form. Until, that is, now.

Come see how the Chandra X-ray observatory just found a record-breaking cluster that confirms our greatest picture of the Universe’s history!

Do you beleive that dark matter is caused by dark photons?

“A survey of X-ray light from galaxy clusters has found no evidence of dark matter decaying, in the latest in a series of contradictory results.”

“The most exciting part, from a cosmology point of view, is that the first true galaxy clusters will only form at this particular juncture in the game — between two and three billion years of age — if the Universe is dominated by dark matter… If we hadn’t discovered clusters forming this early, it would’ve posed some big trouble for dark matter; similarly, if we find them when the Universe is only 1 billion years old…that will spell trouble for dark matter, too. Instead, we’re seeing these cosmic behemoths forming exactly where and when they should.”

Ethan, what would be the earliest authoritative citation of the prediction that dark matter would cause the first galaxy clusters only when the universe was 2 to 3 billion years old and not before that?

“A survey of X-ray light from galaxy clusters has found no evidence of dark matter decaying, in the latest in a series of contradictory results.”

Oh, dear G-d, you weren't even able to connect the dots between the hed and the part that you quoted.

Have a clue on the house: The hed does not refer to the existence of dark matter, it refers to this. You'll report right back with something intelligent to say about it, right? Right?

I do have to credit S.N. with giving me a good chuckle at my own expense, though:

Ethan, what would be the earliest authoritative citation of the prediction that dark matter would cause the first galaxy clusters only when the universe was 2 to 3 billion years old and not before that?

The amusement came from the realization that I had actually taken this seriously for 45 minutes before the extraordinarily sad attempt to revivify the "scientism" routine dawned over Marblehead.

"Do you beleive that dark matter is caused by dark photons?"

Nope, since nobody has explained dark photon as being matter.

The logic behind this conclusion is stunning. All evidence suggest that God can't be detected. A blind man looked in a dark closet and found nothing. Stunning evidence of the existence of God.