"'Topology is destiny,' he said, and put the drawers on. One leg at a time." -Neal Stephenson

If you want to understand the Universe, there are two big areas you need to know: Einstein’s theory of general relativity, which governs the gravitational force and the curvature of spacetime, and quantum physics, which governs all the particles, the states of matter and every non-gravitational interaction ever. While many were expecting the Nobel Prize to go to the LIGO collaboration for the groundbreaking first direct detection of gravitational waves, there are a slew of quantum discoveries that are literally changing our world today. 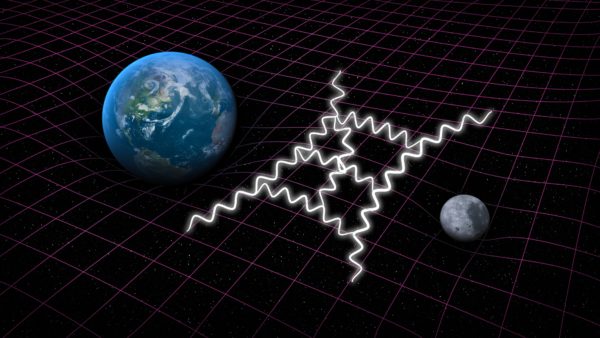 Gravity, governed by Einstein, and everything else (strong, weak and electromagnetic interactions), governed by quantum physics, are the two independent rules known to govern everything in our Universe. Image credit: SLAC National Accelerator Laboratory.

In the 1970s and 1980s, a new field of physics emerged: applying topology to low-temperature, extreme systems. By looking at thin, 2D layers and the topological defects that occurred inside them, new properties of matter appeared. Working out the physics of how these systems worked and the equations that governed them has led to a whole suite of new research, and is leading towards breakthroughs in electronics and quantum computing.

Per nobelprize.org - "The completed nomination forms must reach the Nobel Committee no later than 31 January"

The LIGO announcement was Feb. 11.

Should have added to the above:it's still a great a great (as usual) article.

Ah, but the real shocker was the Ig Nobel prize for reproduction. Egyptian Ahmed Shafik won, for "studying the effects of wearing polyester, cotton, or wool trousers on the sex life of rats, and for conducting similar tests with human males."

To which my only though was: what...no experimental love for leather pants?

Well, it's not like Nobel Prizes are given out for discoveries made during the past year or anything like that. The Nobel committee can sometimes take decades to recognise someone. They didn't give a prize to Frederick Reines until 1995, for his work in discovering the neutrino in 1956! His colleague Clyde Cowan didn't make it, as he died in 1974, and Reines himself nearly didn't as well, as he passed away three years after getting the Prize. It seems that the three winners aren't being awarded for recent work either, judging from Ethan's article.

This new awaking in science opens the door to many wondrous engineering applications involving Bose condensates at high temperatures, vortex based quasiparticles including analog monopoles, and LENR.

The future of physics will be driven by this new and little appreciated direction in condensed matter physics.

@axil #5: Mmmm, mmmm. Can I have a light vinaigrette with that word salad, please?

While most of us think of three phases of matter, solid, liquid and gas, there’s a fourth state that occurs if you heat up a gas too severely: a plasma. But conversely, for some types of matter, there are phases that occur in nature when you cool a material too greatly: a condensate.

I had thought there was a different state of matter theorized deep within gas giants. It wasn't really gas but it wasn't liquid either, so a probe descending into Jupiter wouldn't ever hit the surface of an ocean like on rocky planets. Instead the probe would just descend through the gas envelope into a fluid-like region without there ever being a phase boundry between the gas and fluid-like stuff. Am I mistaken on the theory?

and the 53rd consecutive year that women have been shut out of the prize.

Well they do have brains a third the size of us.

@Denier #7: That's not a "new phase of matter," it's just that the combination of pressure and temperature is beyond the "critical point" in the phase diagram (https://en.wikipedia.org/wiki/Critical_point_(thermodynamics). The material will have very simple fluid properties, but will not be distinguishable as a gas (essentially non-interacting atoms/molecules) or a liquid (strongly coupled atoms/molecules with no fixed configuration).

The LIGO announcement was Feb. 11.

As I recall, there was some speculation that the nomination could have been submitted before the actual announcement. I sorely doubt that Kip Thorne and the other likely recipients chafed in the slightest over the 2016 awardees.

^ And I've just now realized why the lead illustration has been puzzling me on and off: Haldane is David Crosby and Kosterlitz is Jerry Garcia? I'm afraid to plumb my memory for Thouless.

Ethan: "for some types of matter, there are phases that occur in nature when you cool a material too greatly: a condensate."

For for some types of matter, there are phases that occur in nature when you compress them under extreme pressure enough: a condensate forms.

Hydrogen is one of those elements.

Summary:
Forget solid, liquid, and gas: there are in fact more than 500 phases of matter. In a major new article scientists reveal a modern reclassification of all of them.

"To which my only though was: what…no experimental love for leather pants?"

#3
A rat without ratskin pants is a rat feeling a world of hurt.