"The pressure to compete, the fear somebody else will make the splash first, creates a frenzied environment in which a blizzard of information is presented and serious questions may not be raised." -Carl Bernstein

Why is our Moon so unlike every other moon in the Solar System? No other moon is such a large percent of its parent planet’s mass or size; no other moon rotates so far afield of its planet’s rotational axis; no other moon orbits so far out of the planet-Sun plane. Yet our Moon does it all. The giant impact hypothesis might explain why the Moon is made of the same material as Earth, but wouldn’t explain these features. 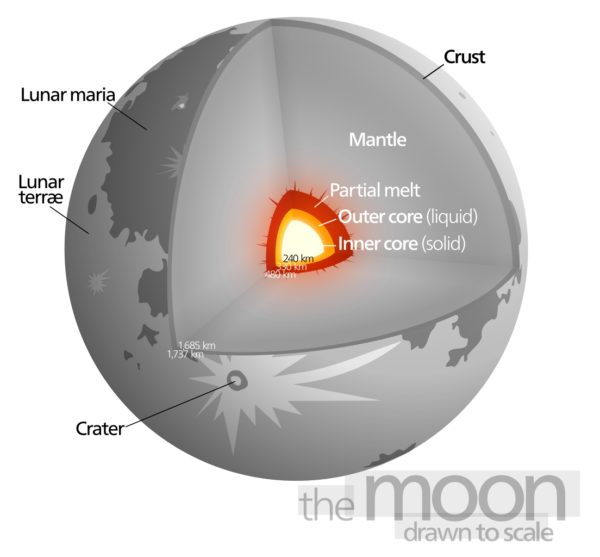 The layers of the Moon, consistent with an origin that is identical to the Earth's interior. Image credit: Wikimedia Commons user Kelvinsong.

Unless, that is, the giant impact occurred with a very large velocity out of the plane of proto-Earth’s orbit. Unless, again, the Earth weren’t rotating at 23.5º prior to the impact. This new tweak on the impact hypothesis, put forth by a team of authors earlier this week in the journal Nature, might explain the unique history of the Earth-Moon system, including some features we don’t normally think about as being puzzling. 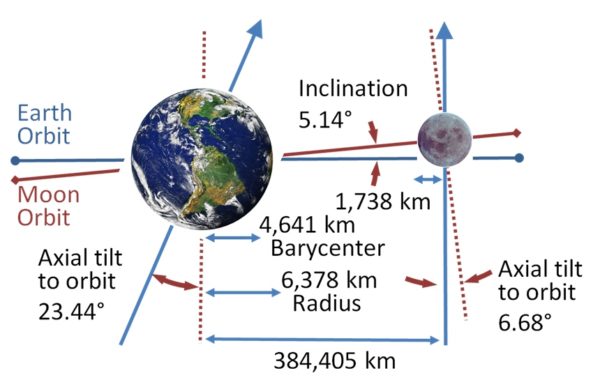 The Earth and Moon, along with some of their more important orbital and rotational properties. Image credit: NASA.

It isn’t just Earth that’s unique in our Solar System, but the Moon as well. Combined, the great cosmic detective story might have a new lead suspect!

The Rarest Eclipse of Them All

"You can't exactly bake a man to your specifications... A hybrid of Einstein, Tarzan and Inge Meysel doesn't exist." -Peer Steinbruck Of course, if you create enough chances, all the things that could eventually happen will come to pass. This is as true for human beings as it is for the physical…

Counterclockwise, but there are exceptions

"Imperfection clings to a person, and if they wait till they are brushed off entirely, they would spin for ever on their axis, advancing nowhere." -Thomas Carlyle When you take a look up at the sky, the two most prominent objects are the Sun and the Moon. And every day, like clockwork, they rise…

"What was most significant about the lunar voyage was not that men set foot on the Moon, but that they set eye on the Earth." -Norman Cousins What would life on Earth be like without the Moon? Our nearest neighboring body in the cosmos has a profound effect on us. It's helped not only shape our…

Could this have an impact on the faint young sun problem: the solar luminosity should have been low enough that even with a lot of greenhouse gases the early earth should have frozen over. But geological evidence including life argue otherwise.
Now if the young (but after impact) earth had a large axial tilt (didn't they suggest >60degrees?) that certainly changes the distribution of sunlight -more at the poles than at the equator, and I wonder if that makes it harder to glaciate. Add in heat dissipation -from among other things the very large tidal forces early on, could that supply enough heat to solve the paradox?

we normally think of Earth as the unique, special world above all others.

Well, sure. I live here.

A back of envelope look at tidal dissipation:
Total force (actually gradient) scales as one over R**3. The amplitude of any perturbation would be expected to scale as
amplitude squared, so that gives a naive scaling factor of tidal dissipation with distance of one over R**6. Current tidal dissipation of the earth moon system is estimated as roughly 1 terawatt. So at ten times closer we would expect roughly
a million times that or 1e18 watts. The total sunlight intercepting the planet is something like 65.e16. So tidal dissipation on the early earth could be greater than the available sunlight. I wouldn't be surprised if very significant heat was available from this mechanism to keep the early earth warm.

This might be a bit lame question but here it goes. If Moon has a liquid metal core, similar in composition to Earth, and is rotating, why doesn't it have a dipole magnetic field, like Earth?

"The likelihood that the early Earth was hit with the right properties to explain the current tilt of the moon’s orbit “is something like 30 percent,” Stewart said. “It’s reasonably likely.”"