When we first began looking for exoplanets, we were expecting that other solar systems would be like ours: with inner, small, rocky worlds and outer, large gas giants. What we found surprised us in a couple of ways. Not only could planets of any size appear anywhere, as they seem to, but the most common mass for a planet was somewhere between two and ten Earth masses, something we don’t have a single example of in our Solar System.

While a visual inspection shows a large gap between Earth-size and Neptune-size worlds, the reality is you can only be about 25% larger than Earth and still be rocky. Anything larger, and you're more of a gas giant. Image credit: Lunar and Planetary Institute.

Does this mean something unusual happened in our Solar System? Did we have some oddity of our formation that prevented us from having the most common class of world? Up until this year, that was the consensus opinion. But thanks to a new paper by two Columbia University astrophysicists, we’re realizing that the big problem is not our Solar System, but our way of classifying planets. 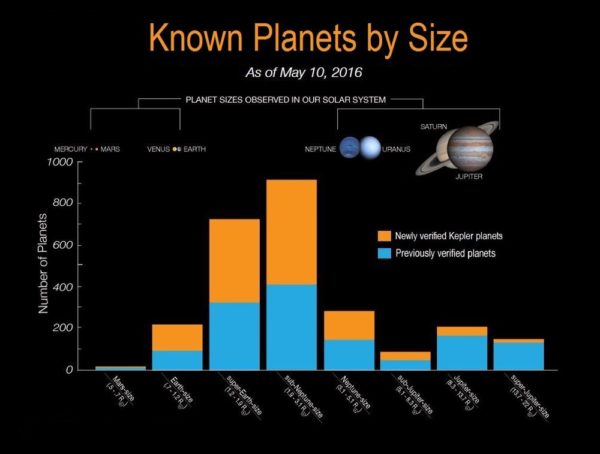 The numbers of planets discovered by Kepler sorted by their size distribution, as of May 2016, when the largest haul of new exoplanets was released. Super-Earth/mini-Neptune worlds are by far the most common. Image credit: NASA Ames / W. Stenzel.

It turns out that you can’t be much larger than Earth before you become a gas giant, and so the missing “super-Earths” may turn out to simply be Venus and Earth!

Wait, does this mean Pluto is a planet again?!

So somewhere around two earth masses, a rocky planet becomes a magnet for gases, instead of just condensed matter (dust through planetoids). Now I presume this a largely a sequential process -accumulate rocky material, and then start accumulating large amounts of Hydrogen and Helium as well. Is there much scope for a rocky planet above roughly M=2, to be able to keep accumulating rocky material and rejecting gas? What if it were really hot? Could a large late impact cause the gas envelope to be lost? Could the accretion disk lose the gas, but still retain for an interesting length of time the rock and dust?

"Wait, does this mean Pluto is a planet again?!"

No. Just like Ceres isn't a planet again. It was once, but the European who discovered it accepted it's "Demotion" to the new classification of "Asteroid", nobody remembers that it once was a planet.

This obsession with Pluto stems from the american bloke who spent years telling everybody there was a planet beyond the known ones. He never found it, but when a later american found a large asteroid out there (which was nowhere near where this supposed outer planet was meant to be) there was a collective desire in the american astronomical fraternity to link the asteroid find to the inaccurate prediction of an additional outer planet.

He never found it, but when a later american found a large asteroid out there (which was nowhere near where this supposed outer planet was meant to be) there was a collective desire in the American astronomical fraternity to link the asteroid find to the inaccurate prediction of an additional outer planet.

Wow, your past has so much wrong, both factually and by implication, I'm not sure where to start.

First, Tombaugh found Pluto while working at one of Lowell's observatories, using search criteria originally developed by Lowell based on his predictions of where the 9th planet should be.

Second, Lowell didn't come up with the idea of planet X, nor was this idea even American; the French came up with it in the 1840s.

Third, the search for planet X was not some sort of American enterprise. Lowell didn't start his search until 1906, ~60 years after the French, Germans, and British had all been searching for it. The Americans were relative latecomers in what was an international effort.

Fourth, it wasn't just the AAS that declared Pluto a planet; the IAU and (British) Royal Astronomical society did too. In fact the name "Pluto" was proposed by Venetia Burney, an 11-year-old British schoolkid. Though in keeping with the times, the discovering team (in this case, the Americans) were allowed to pick the name.

And lastly, the classification of Pluto as a planet was not due to some American nationalistic bias towards claiming a known asteroid as a planet; at the time of the discovery everyone thought Pluto was much bigger than it turned out to be. They thought it was much bigger than Earth, in fact. This is because everyone had the mass of Neptune wrong, which lead to an incorrect prediction of what Pluto's mass would have to be for the celestial mechanics to work out. This error in Neptune's mass wasn't found and corrected until 1989. So when Pluto was discovered, the best available science at the time - fully accepted by the international community - predicted that Pluto had to be much bigger than Earth. That's why those three societies declare it a planet, not merely because of some American bias. Now, the 1989 correction doesn't tell the whole story; the original mass estimates of Pluto kept getting revised down the whole time between 1930 and 1976, when Pluto's actual mass was finally accurately measured. Maybe you can argue that re-classifying Pluto should have occurred in the late '70s or '80s, but it really misinterprets what astronomers knew at the time to imply that in the 1930s they only declared an asteroid a planet out of political motives; they didn't know it was an asteroid then, and all the best science of the time - accepted not just by the US, but by the international astronomical community - said it wasn't an asteroid.

"And lastly, the classification of Pluto as a planet was not due to some American nationalistic bias towards claiming a known asteroid as a planet"

HE NEVER SAID IT WAS. The reason why it's such a big issue for it being reclassified is due to some American nationalistic bias towards claiming a known asteroid as a planet.

Please, before you go whining about how someone got it all wrong, check the writing for what it says, not what you'd like it to say, doing so is a logical error called "the strawman argument".

As to the rest of it, there's not a lot of contraindication of your detail of the history and Craig's vague recounting, his being mostly unattributed to any names, so complaining that someone was named incorrectly is another logical fallacy.

Mostly you could have done the same job by explaining the observation of Pluto (and it WAS originally attributed to Planet X that was expected, the search criteria being the most likely location to find such a difficult object, though the academic area was more cautious than the popular press, as usual) and not complaining.

Me: “And lastly, the classification of Pluto as a planet was not due to some American nationalistic bias towards claiming a known asteroid as a planet”

Wow: HE NEVER SAID IT WAS.

Craig (my bold): there was a collective desire in the american astronomical fraternity to link the asteroid find to the inaccurate prediction of an additional outer planet

Yeah he did. He called it an asteroid find. But that's a very ahistorical description, because it interprets scientific decisions made in the 1930s as if those scientists had had information we only discovered in the 1970s-80s.

He never found it, but when a later american found a large asteroid out there

When it was found, it was eventually called a planet when confirmed. If at the time we had the current knowledge, it would have been classified as an asteroid.

Craig, as I see it, is mixing timeframes, and getting a little confused and confusing about it.

And mixing up Kuiper Belt and Asteroid Belt as a rhetorical device is ingenious but enhances confusion rather than illuminate the situation.