There's no such thing as a 'habitable Super-Earth' (Synopsis)

"How vast those Orbs must be, and how inconsiderable this Earth, the Theatre upon which all our mighty Designs, all our Navigations, and all our Wars are transacted, is when compared to them." -Christiaan Huygens

It was quite a surprise when we started discovering all the exoplanets that were out there. While there’s a big gap between a world like Earth and a world like Uranus or Neptune in our Solar System – 17 times the mass and 4 times the radius – most of the worlds out there fall in between these two types. Super-Earths and Mini-Neptunes are the most common. 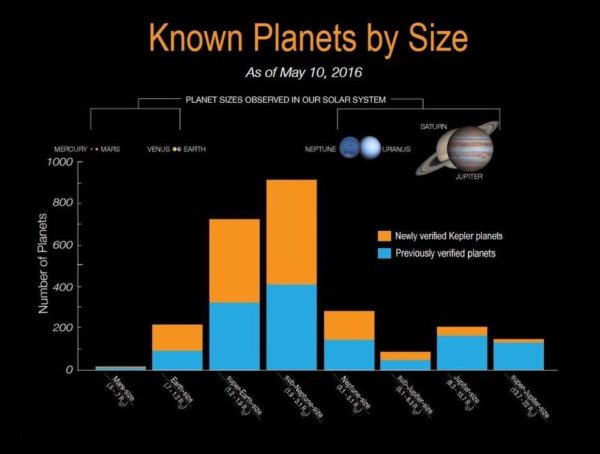 The numbers of planets discovered by Kepler sorted by their size distribution, as of May 2016, when the largest haul of new exoplanets was released. Super-Earth/mini-Neptune worlds are by far the most common. Image credit: NASA Ames / W. Stenzel.

But it turns out that what we’re calling a “Super-Earth” is a total misnomer! These worlds may be larger than Earth, but they’re much more like Uranus or Neptune than they are like our own. They have big gas envelopes surrounding them, and can even hold on to their young hydrogen and helium. The only way out is to boil the atmosphere away, and if you do, you’ve got a rocky core that’s close enough to its star to be roasted. 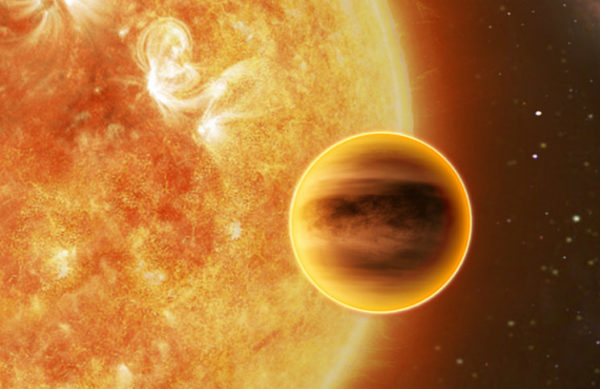 An artist's illustration of a hot Jupiter world. If you're hot enough to boil off the atmosphere, you can wind up with a rocky Super-Earth, but the temperatures will be so high that you'll roast your planet. Image credit: ATG medialab, ESA.

Come find out the full story behind why there’s no such thing as a habitable Super-Earth!

So to lose its H2,He and now be in the habitable zone a "super earth" would have to have had an unusual history. Either it would have had to migrate outwards after it lost its atmosphere, like in the grand tack models for Jupiter, or perhaps it could it have lost its atmosphere due to an exceptionally violent collision?

The variables that determine the retention of a gas envelope are something that I don't get at all. At first glance it would seem that some combination of planetary mass, density, magnetic field strength, and strength of the solar wind would determine it, but how then do you explain Venus?

Venus has only 82% of Earth's mass, has no magnetic field to deflect the solar wind, is closer to the star and therefor subject to a greater solar wind than is the Earth. That would suggest a smaller gas envelope but instead the atmosphere on Venus is so thick that the atmospheric pressure on the surface is 92 times as great as it is on Earth.

When gravity gets high enough I can understand, but Earth size seems to be in a transition area where a planet can have a wispy atmosphere or a crushing one.

So CO2is very closely guarded, even on Venus.

So, Denier forgets that CO2 will be fractionally more retained in Venus' atmosphere over than He or H2 because of weight. That's an amusing coincidence.

Still not seeing what? Your original complaint was confusion that the atmosphere is on there given its so hot and the sun so near, and yet the earth lost its lighter atmosphere.

On the earth, a lot of the CO2 is contained in carbonate rocks, which are continually replenished by the silicate weathering process. So on our lucky orb, volcanoes convert carbonates back to silicates, and emit CO2, but weathering of silicates in the presence of water puts the CO2 back into rock form (carbonates). So most of the planets carbon inventory is in the form of carbonates. On Venus, no such luck, it ends up in the atmosphere.

denier is on board with the conspiracy theory that it's uncounted underwater volcanoes melting the ice and increasing the atmospheric CO2, yet doesn't think there could be anything on the highly volcanically active (resurfacing completely every few million years) Venus to produce CO2...