Just as a Chihuahua is still a dog, these ice dwarfs are still planetary bodies. The misfit becomes the average. The Pluto-like objects are more typical in our solar system than the nearby planets we first knew.” -Alan Stern

The Pluto story just gets better and better. Although the flyby of July 2015 lasted only a few hours, the full suite of data taken took 16 months to transmit back to Earth. That finally completed a few weeks ago, and we not only have a complete high-resolution map of Pluto's surface, we also have topological, chemical/molecular and gravitational data covering the surface. 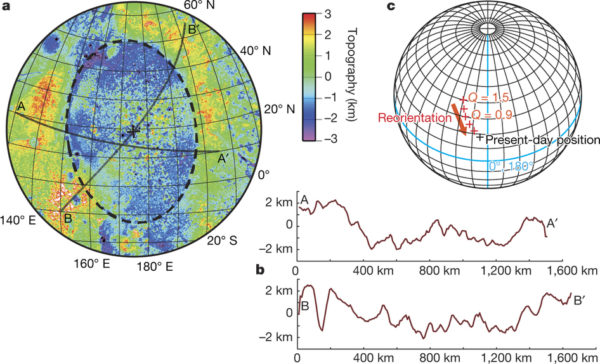 This unusual view of Pluto is a topographic map, showing variations in crustal heights derived from New Horizons data. Note that Sputnik Planitia is 2-3 km below the mean altitude of the rest of the world. Image credit: F. Nimmo et al., “Reorientation of Sputnik Planitia implies a subsurface ocean on Pluto”, Nature (2016).

This means we can analyze Pluto's geological features in terms of the phyiscs and chemistry we know, and draw conclusions based on that. The most striking feature might be Pluto's heart, but it looks like the heart's formation and evolution dragged the whole planet over. Best of all, the whole process may still continue to evolve. 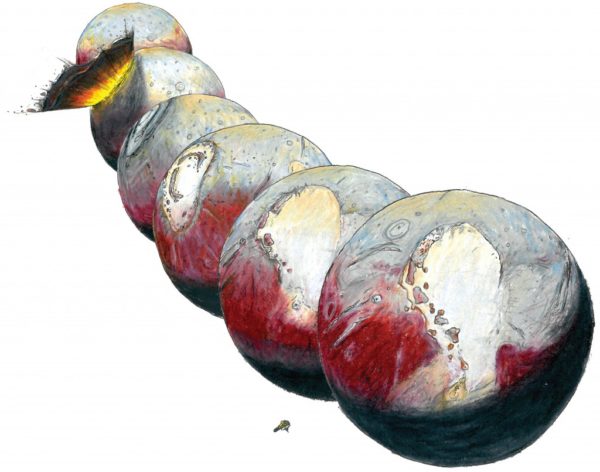 Pluto is an active world after all, and we've just derived the greatest scientific breakthrough of a world so distant from the Sun: an understanding of Pluto's interior!

What would keep the ocean layer liquid? Tidal stresses from Pluto's moons? Or maybe it's leftover heat from the big impact?

@1: one of the more interesting properties of H2O is that when you squeeze ice, you can get back to the liquid phase. So it could just be the pressure making the layer a liquid.

Of course the colder it is, the harder you have to squeeze, and it may be cold enough on Pluto that mere pressure isn't enough. So there may be some other contributing factor too...but pressure would be my first guess.