LHC's newest data: a victory for the Standard Model, defeat for new physics

“There is nothing new to be discovered in physics now. All that remains is more and more precise measurement.” -Lord Kelvin

The particle physics ‘nightmare scenario’ was that the LHC at CERN would achieve its desired energies and collision rates, that it would find a single Higgs boson between about 120 and 140 GeV, and that it would see absolutely nothing else. No new particles, no bizarre decays, nothing that couldn’t be accounted for by the Standard Model. With the latest release, that’s exactly what’s happening.

The observed Higgs decay channels vs. the Standard Model agreement, with the latest data from ATLAS and CMS included. The agreement is astonishing. Images credit: André David, via Twitter.

There’s no evidence at any appreciable significance for any new particles or interactions, and no compelling reason to expect that a larger, higher-energy collider will find anything new. Unless the LHC pulls out a surprise over the coming years, the Standard Model might be it for what high-energy colliders are capable of finding here on Earth. 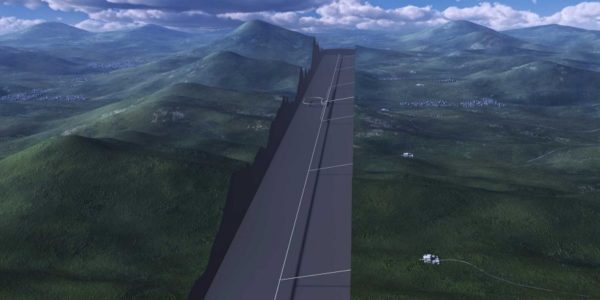 A hypothetical new accelerator, either a long linear one or one encircling the Earth, could dwarf the LHC's energies, but still might not find anything new. Image credit: ILC collaboration.

Come find out what the latest data says about where we are in the hunt for new physics, and remember to be skeptical of claims to the contrary!

When you are driving down a road and find that it is a dead end, you turn around and retrace your steps until you are somewhere you can recognize, then you find another path. So how far back will physicists have to go ripping up old theory and assumptions?
My guess is at least all the way back to GR, and probably a bit more before they get a much better grip on gravity.
The very fact that SM can not account for gravity means it is (at the very least) as wrong as a hand tuned heuristic model can be of describing a universe that isn't ours, that leaves out the minor detail of how it's possible for you to read about it while standing on a planet orbiting a star orbiting a galaxy orbiting other galaxies...much less the whole 'starts with a bang' idea you are so fond of.
At least the Chinese probably won't waste even more money on trying to build an even bigger electric train-set for bragging rights. Who knows, they might decide to pour that extra cash into a something we already knows could actually work, like a very large new orbiting telescope instead.

While a great quote, it is not from Kelvin but from Albert A. Michelson. See https://en.wikiquote.org/wiki/William_Thomson#Misattributed

So we’ve reached the Desert. No new physics from 10^12 eV to 10^25 eV (the grand unification scale), and that’s a long, long way away. No way we’re bridging that gap even if we could build an accelerator that circles the planet. :(

But shouldn’t there be lower-energy consequences to the grand unification that we could potentially probe by going to higher energies? We would not be completely lost in the desert then, if we can get such hints.

And then there is neutrino physics. That seems to be just about the only fruitful area of physics beyond the Standard Model. If they get their masses through the seesaw mechanism as has been proposed, the neutrino seesaw scale lies within the desert.

Lord Kelvin suffered from a horribly swollen ego, like many smart people.
" Another example of his hubris is provided by his 1895 statement "heavier-than-air flying machines are impossible" (Australian Institute of Physics), followed by his 1896 statement, "I have not the smallest molecule of faith in aerial navigation other than ballooning...I would not care to be a member of the Aeronautical Society."
So much for the ignorance of experts. It delights me to no end that two bicycle mechanics from Ohio proved him wrong.

The whole moving-troll routine is getting tiresome.

Lord Kelvin suffered from a horribly swollen ego, like many smart people.

Irony notwithstanding. You have offered nothing here other than blowharding about the epigraph, apparently because your semiliterate, content-free, apropos-of-nothing ("all the way back to GR, and probably a bit more") whine failed to attract any attention.

Until you solve the mystery of gravity particles or ?, you really have figured out anything.

"Irony notwithstanding". Nice burn Narad. Really though, ad-hoc criticism of giants is tiresome.
We may want to temper our attitude (not our fire) with some humility. Imagine what thinkers may be saying of our work in 100-200 years.