"Just to clarify, neither Jason or myself ... are advocating that it is an alien megastructure, but we also can't completely rule it out." -Kimberly Cartier

When we launched the Kepler spacecraft, we expected that we’d be able to measure the light from over 100,000 stars at once, practically continuously, over the timespan of many years. We discovered a number of planets, variable stars and eclipsing binaries, including many of the most Earth-like planets ever. But one star stands out as unique: Tabby’s star.

While planets might block up to 2% of a star’s light, Tabby’s star dims by up to 20%. The flux dips aren’t periodic, and there’s no infrared radiation accompanying it. In the entire Kepler catalogue, it’s unique. Since the conventional explanations fail, maybe it’s aliens! While the Alien Megastructure hypothesis may tickle our fancy, two new, independent studies both offer a much more natural way out. 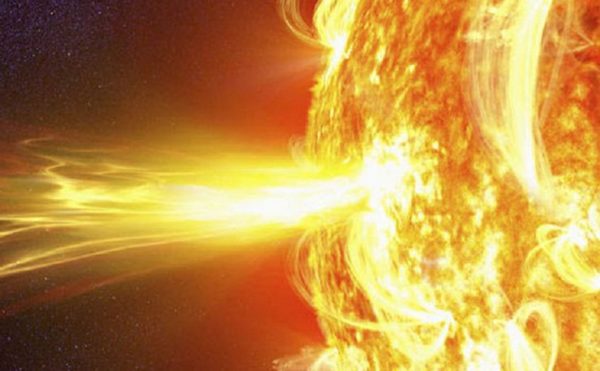 A solar flare from our Sun, which is far lower in magnitude and light-blocking capabilities than needed to explain Tabby's star. Image credit: NASA’s Solar Dynamics Observatory / GSFC.

Could it be due to a new type of stellar outburst in this star, as the smaller flux dips hint? Or perhaps long-period comets with dust cloud halos intercepting the light? We’ve got a long way to go before ‘aliens’ is our conclusion!

So we have evidence of power law scaling of event magnitude. Now can we come up with any plausible processes. I have to admit my imagination fails me, I think of an "avalanche" process as something that suddenly releases energy that was gradually accumulating, but what we are observing are events that lower radiated energy. Things like flares I would think would spike the other way. So anyone goy any guesses as to what it might be?

@Omega #1: "Avalanche" is the right technical term here. A power law distribution for magnitude is exactly what you see in avalaches (many more little ones that giant ones), earthquakes, spark discharges, etc.

Sunspot activity, or other stellar outbursts, would reduce the observed luminosity because the expelled material absorbs the star's light. The "avalanche trend" describes the frequency vs. amount of material.

It seems to me that long-period comets would have a similar behaviour, given that their size (and hence the amount of material in their tails) is also described well by a power law.

But note that the luminosity goes up before (and possibly after, we don't have enough information in that graph) any sudden dip.

If you take into account that Tabby's star was/is dimming at an incredible rate for the last hundred or so years. And then these dips that sometimes go as much as 20% of the brightness... and I had to extrapolate a hypothesis... I would say that the star is somehow dying. But totally unlike anything we know.

I'm almost thinking about something that could be inhibiting fusion from the inside. What if it's not the light getting blocked by something, but the start itself getting "buggy".