It's Dimming! Astronomers jump at opportunity to solve the mystery of Tabby's Star (Synopsis)

Earlier this decade, the Kepler mission became the most successful planet-finding endeavor of all time, turning up thousands of new worlds by measuring the transit data of some 150,000 stars. When planets passed in front of their parent star, they blocked a tiny fraction of their light, leaving behind an imprint of a periodic dimming signal. But one star dims differently from all the others. 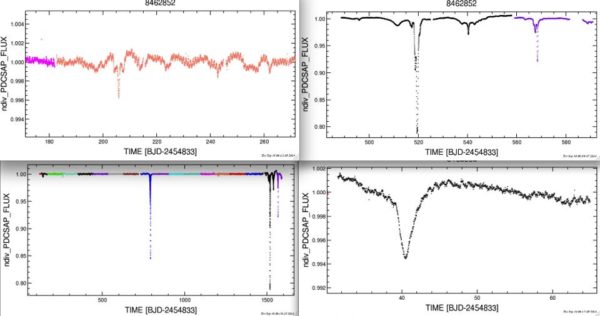 Different steps in the Kepler time series data that show the periodic and aperiodic dimming of KIC 8462852, with incredibly large brightness changes. Image credit: Tabby Boyajian and her team of PlanetHunters.

KIC 8462852, known as Tabby’s star, has irregular dips of up to 20% in brightness, equivalent to ten times the effect of all the Solar System’s planets combined. What could be causing this? While a few astronomers have proposed alien megastructures, another, simpler explanation might explain it all: a recently devoured planet. 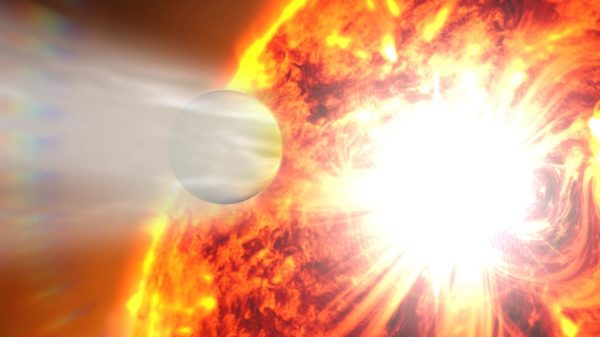 An artist's impression of HD 189733 b, a Hot Jupiter so close to its host that its atmosphere is being boiled off into space. Over time, it will be devoured entirely, something that may have happened to Tabby's star not so long ago. Image credit: NASA / GSFC.

As a new dimming event is underway, astronomers hope to collect enough quality observations to validate or disfavor all the ideas bouncing around. Find out more today!

It's a trap! While everyone is watching tabby dim, that's when the aliens will strike!

We prefer the term "luminously-challenged."

Having opened the posssibilty of stellar light curve modulation by civilizations, these researchers should start thinking about their diplomatic explanation: