The Science Has Spoken: Pluto Will Never Be A Planet Again (Synopsis)

"One should not need a teleportation device to decide whether a newly discovered object is a planet." -Jean-Luc Margot

It was a harsh lesson in astronomy for all of us in 2006, when the International Astronomical Union released their official definition of a planet. While the innermost eight planets made the cut, Pluto did not. But given the discovery of large numbers of worlds in the Kuiper belt and beyond our Solar System, it became clear that we needed something even more than what the IAU gave us. 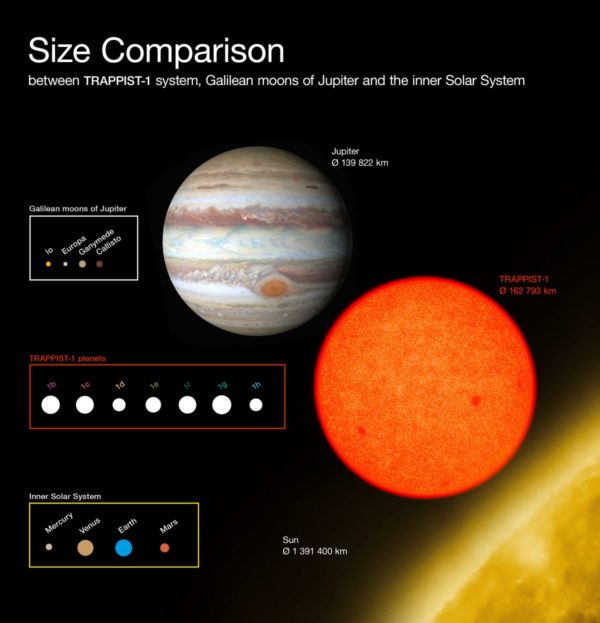 This diagram compares the sizes of the newly-discovered planets around the faint red star TRAPPIST-1 with the Galilean moons of Jupiter and the inner Solar System. All the planets found around TRAPPIST-1 are of similar size to the Earth, but the star is only approximately the size of Jupiter. Image credit: ESO / O. Furtak.

We needed a way to look at any orbiting worlds around any star and determine whether they met a set of objective criteria for reaching planetary status. Recently, Alan Stern spoke up and introduced a geophysical definition of a planet, which would admit more than 100 members in our Solar System alone. But how does this stand up to what astronomers need to know?

The orbits of the known Sednoids, along with the proposed Planet Nine. Image credit: K. Batygin and M. E. Brown Astronom. J. 151, 22 (2016), with modifications/additions by E. Siegel.

As it turns out, not very well. But the IAU definition needs improving, too, and modern science is more than up to the challenge. See who does and doesn’t make the cut into true planetary status, and whether Planet Nine -- if real -- will make it, too!

Practically everyone alive today grew up learning some way of remembering the nine planets of our Solar System in order: Mercury, Venus, Earth, Mars, Jupiter, Saturn, Uranus, Neptune and Pluto.

For kids growing up today and looking for a good rhyme or mnemonic for the planets, I recommend "The Planets Song" by Bemular. Their voices are harsh and I don't think they do justice to Mars, but it's catchy. For parents of little kids I also recommend Margaret Weitekamp's picture book, "Pluto's Secret."

The clincher really is the quote you started with there. The problem for the geophysical definition was it was OK as long as you could look close enough to determine the composition roughly and determine the size in enough detail to SEE it is round.

Neither of which currently work outside our own solar system and only recently did we see Pluto in enough detail to see it was a hell of a lot smaller than thought, even after its massive mass drop when it was dropped as the "Planet X" causing Neptune to move oddly.

A clear orbit is easier to tell. If a planet isn't being disturbed from an elliptical orbit, then it's cleared its orbit of anything invisible. And for the bits that are visible, we can see whether it's a duopoly or ring or whatever (and, see if it's round...).

The IAU definition meeting was solely about the solar system planets and the definition of planet therein. It was always a "TBD" for how it would be changed to include extrasolar planets.

After all, the word planet derived from "wanderer" from the procession across the sky by these wandering stars. And we can't see extrasolar planets and they'd not wander off across our sky away from their parent star...

You had me wondering if there was something new and conclusive on Pluto being excluded from planethood when you posted '7 Ways Earth Would Change If Our Moon Were Destroyed' with the crafted line:

Our Moon is pretty unusual as far as the Solar System goes: of all the planets, our Moon has the largest mass and radius ratios when compared to its parent planet.

It just means that without Pluto being a planet, our moon is the biggest one compared to the parent, while with pluto as a planet, charon took that crown.

So what do you mean when you quoted that statement and said of it "if there was something new and conclusive on Pluto being excluded from planethood"? It's copacetic with pluto remaining a non planet.

Here's a radical suggestion: we should abandon the entire concept of "planets". There are lots of different types of objects orbiting around out there, and you can categorise them into different groupings depending on which characteristics you're particularly interested in, but trying to reify this distinction between "planets" and "non-planets" looks increasingly arbitrary and meaningless. Does the Earth really have more in common with Jupiter than it does with Pluto, or even it's own Moon? Well, in some ways it does, and in other ways it doesn't...

Are those lines in the atmosphere -- in the original post picture -- artifacts of digitizing to a few shades of gray, or real distinct layers in the haze?

"There are lots of different types of objects "

Yeah, you're just going for "thing" here, aren't you.

So, pissed that you lost planet you want planet gone so you don't feel left out. here's a radical idea: become a professional astronomer and see what use the definition of planet has.

Sorry, I just don't buy it! Not just me, but all of my friends and family know that Pluto is a planet. Our teachers told us. We say it in books. Now a bunch of scientists (who we don't know and will never meet) have "changed their minds." That doesn't change mine! In my universe -- apparently full of dark matter, dark energy, emergent gravity, and other forces that no one can see or feel or measure except through math -- in my universe, Pluto will ALWAYS be a planet. We can see it! And I thank the stars it is there.

Wow, #8: Actually, I'm completely happy with Pluto not being a planet.

Attempting to divine people's motivations without sufficient evidence is generally not helpful.

Now a bunch of scientists (who we don’t know and will never meet) have “changed their minds.” That doesn’t change mine! In my universe — apparently full of dark matter, dark energy, emergent gravity, and other forces that no one can see or feel or measure except through math — in my universe, Pluto will ALWAYS be a planet. We can see it!

You can see it? That's one hell of a set of binoculars you have there.

Ironically, as Wow notes, it was because a bunch of scientists you don't know and have never met didn't see Pluto accurately, that it was given planet status. Had they seen it better, they would've noted its small mass and eccentric orbit and might have not been so quick to pull the trigger on calling it a planet.

Well if you don't supply the information, dunc, others, not being able to read minds across the internet, will have to make assumptions based on the limited information you give.

If you don't want to be misattributed with a motivation, you need to provide more information than"here's a radical idea, drop everything being a planet", because the clear motivation for that is to screw over the idea of "planet" being of any use at all. Which only makes sense if you're so pissed off at Pluto losing it, you want to punish people for doing that in the face of reality saying "no, it's not going to be special pleaded back in".

Since your claim and your assertion for motivation do not appear to complement each other, I either discard your first post or your second.

Pluto was a bit of a cock-up, to be honest. It was a mistake. A bit like Columbus finding America. He was expecting India. For pluto they were expecting something bigger than Neptune to explain it. They just happened to be looking in about the right place.

And because Pluto is quite bright, the early estimates had to be based on the reflected brightness of pluto, since it was not possible to resolve it to see how reflective it was, but a larger unresolved source will appear brighter than the same colour of a smaller body.

And as observations got more precise (a lot of hard work in the cold and badly paid), they ramped it down lower and lower. And it quickly became a problem because the orbit of Neptune was no longer explained by another planet.

Turned out the orbit of Neptune wasn't accurately enough known, and better observations removed any need for another planet to disturb it.

Pluto just happened to be in the place they were looking for a biggger planet.

Which only makes sense if you’re so pissed off at Pluto losing it, you want to punish people for doing that in the face of reality saying “no, it’s not going to be special pleaded back in”.

No, it also makes sense if you look at the four inner planets and the four outer planets and think "these clearly are very different types of things, why are we trying to shoehorn them into a categorisation scheme which was originally defined based on what was visible to the naked eye from Earth in fuck-knows-when BCE?"

No, it still doesn't make sense that way, Dunc.