"When we have found how the nucleus of atoms is built up we shall have found the greatest secret of all — except life." -Ernest Rutherford

What does the future of astrophysics look like? Have we already made all of the fundamental discoveries we’re going to make? Is the rest just categorization of objects, identification of more examples of what’s already known, and minor refinements of the knowledge we already have? Or are there fundamental discoveries still to come, just waiting for us to reveal them? 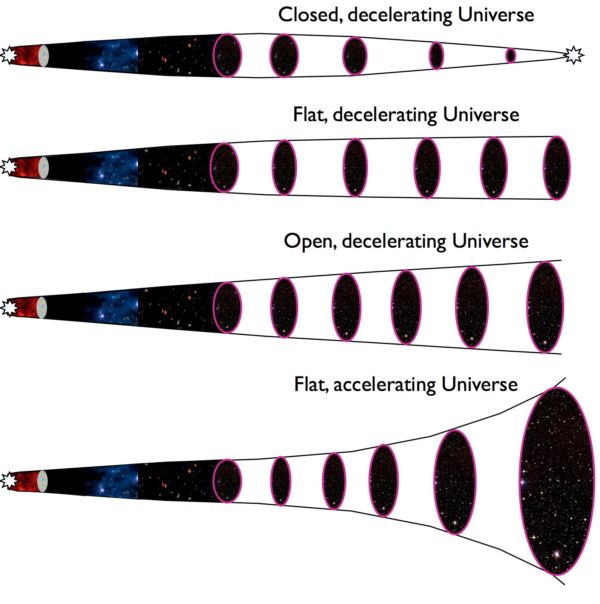 The four possible fates of our Universe into the future; the last one appears to be the Universe we live in, dominated by dark energy. Image credit: E. Siegel.

There are so many big questions still out there, and a great many of them have astrophysical consequences! In addition to new observatories, larger telescopes than ever, and problems like dark matter and the matter/antimatter asymmetry, there are five recent discoveries – within the last generation – that have significant implications for the Universe. 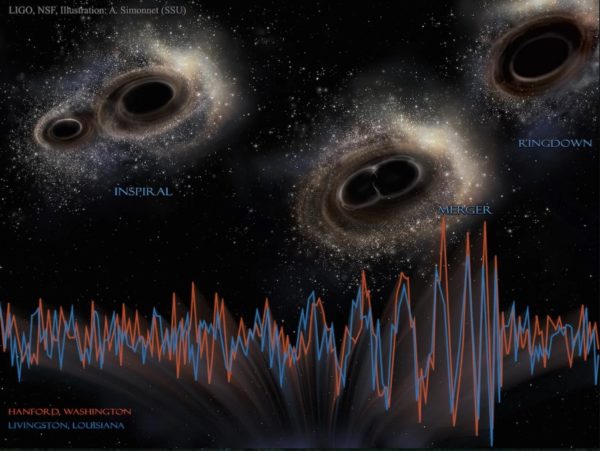 Merging black holes are one class of objects that creates gravitational waves of certain frequencies and amplitudes. Thanks to detectors like LIGO, we can 'hear' these sounds as they occur. Image credit: LIGO, NSF, A. Simonnet (SSU).

Come take a look at five of them: neutrino mass, the accelerating universe, exoplanets, the Higgs boson, and gravitational waves, and learn what the future holds!

“The joy of life consists in the exercise of one’s energies, continual growth, constant change, the enjoyment of every new experience. To stop means simply to die. The eternal mistake of mankind is to set up an attainable ideal.” -Aleister Crowley As we learn more and more about the Universe, we'd…

Comments of the Week #174: from growing black holes to nuclear bombs

“It will shine still brighter when night is about you. May it be a light to you in dark places, when all other lights go out.” ―Galadriel, LOTR, J.R.R. Tolkien Well, we've been anticipating it for months (or years), but this is our very first time meeting up since the total solar eclipse here at …

Comments of the Week #100: From wave-particle duality to leap day

“A great accomplishment shouldn't be the end of the road, just the starting point for the next leap forward.” -Harvey Mackay Tomorrow is such a big, rare day that it only comes once every four years (or 4.1237 years, for a little greater precision), yet practically every day offers something new…

5 Facts We Can Learn If LIGO Detects Merging Neutron Stars

"It’s becoming clear that in a sense the cosmos provides the only laboratory where sufficiently extreme conditions are ever achieved to test new ideas on particle physics. The energies in the Big Bang were far higher than we can ever achieve on Earth. So by looking at evidence for the Big Bang, and…

"why is the gravitational force so much weaker than all the other forces"
Isn't it possible gravity is not a force but just bending of spacetime?
Notice that the three forces already known (Strong, Weak, Electromagnetic) all use particles as mediators except gravity. All searches for graviton failed, isn't it? Or is there still hope for finding it?
(Also if gravity (bending of spacetime) is not a force, it would support the idea that relativity is an emergent property.)

I think another big question in physics is what is arrow of time.
I think arrow of time is not created by entropy but it is actually what we call causality (cause and effect).
More explanation:
http://fb36blog.blogspot.com/2017/05/what-is-arrow-of-time.html

The 21st Century Will Be The Best One Ever For Astrophysics

I think you're selling the 20th Century very short. Just for starters 2 of your 5 reasons for 21st Century greatness actually took place in the 20th. The first exoplanet was confirmed in 1992, and the accelerating universe comes from two teams of astronomers in 1998.

We went from no such thing as an airplane, to escaping gravity, to putting a human on a world other than Earth, to shooting off a pair of probes that would leave the solar system.

We invented adaptive optics, computer aided 'lucky' imaging, and put telescopes in space for the first time. We built antennas that found the CMB. We invented computers!

We invented the concepts of E-MC2, GR, and SR, not to mention QM. We also put forth the Standard Model in the 20th Century and the whole idea of the Big Bang.

The 20th Century was the Century of giants. We're almost a fifth of the way though the 21st and all we've got are slight refinements or confirmations of the ideas the giants of the 20th came up with.

I'm sure we'll learn some new stuff in the 21st Century, but 'best one ever'? Better then Einstein? You really think that?