Science Busts The Biggest Myth Ever About Why Bridges Collapse (Synopsis)

"At least six lamp posts were snapped off while I watched. A few minutes later, I saw a side girder bulge out. But, though the bridge was bucking up at an angle of 45 degrees, I thought she would be able to fight it out. But, that wasn't to be." -Bert Farquharson

If you’ve only ever seen one bridge collapse ever, it was probably the Tacoma Narrows Bridge. On November 7th, 1940, high, sustained winds sent the bridge from an up-and-down undulation into a twisting, rocking pattern that led to the eventual collapse of the structure. It’s been used as a classic example of resonance at work, similar to how a wine glass will shatter when exposed to the right frequency pitch.

A wine glass, stimulated by a continued sound at just the right pitch/frequency, will vibrate at such a frequency that the internal stresses will destroy it. Image credit: Marty33 / YouTube.

While the shattering of glass is due to resonance, and it is a real phenomenon, the numbers just don’t add up for the bridge. Instead, it’s a much more intricate phenomenon that caused that infamous bridge collapse, known as flutter. If you’ve heard the resonance explanation, you’re not alone: it’s probably the most common misconception in all of physics and engineering! 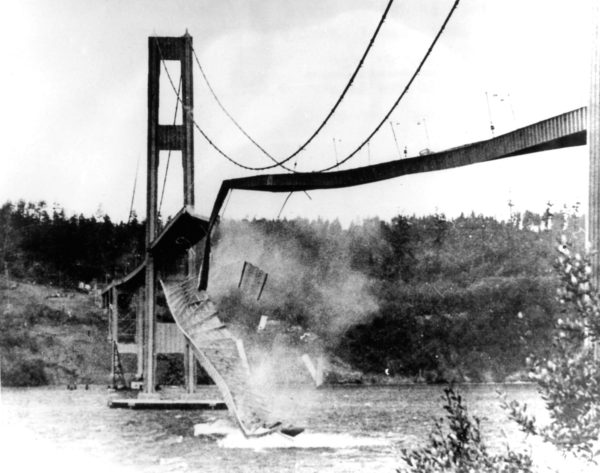 Don’t be fooled any longer. Come get the full -- and correct -- story today!

So are the sheetmetal spirals on smokestacks
for resonance or flutter?
Until reading this i had assumed resonance.
Thanks if the author or anyone knows.

Li D, the spirals are to break up any Karman vortices that can cause flutter.

#3 Its very considerate of you to take time
to answer. Thanks.