Surprise! The Universe Has A Third Way To Form Black Holes (Synopsis)

"N6946-BH1 is the only likely failed supernova that we found in the first seven years of our survey. During this period, six normal supernovae have occurred within the galaxies we've been monitoring, suggesting that 10 to 30 percent of massive stars die as failed supernovae." -Scott Adams

Everyone knows the recipe for a black hole: create a massive enough star, allow it to burn through the fuel it its core, and wait. After enough time, the core will collapse, creating a type II supernova and a runaway fusion reaction. The outer layers explode while the core implodes, leaving behind a black hole if it’s massive enough. Alternatively, merge two failed black holes -- i.e., neutron stars -- together, and you get a black hole, too. 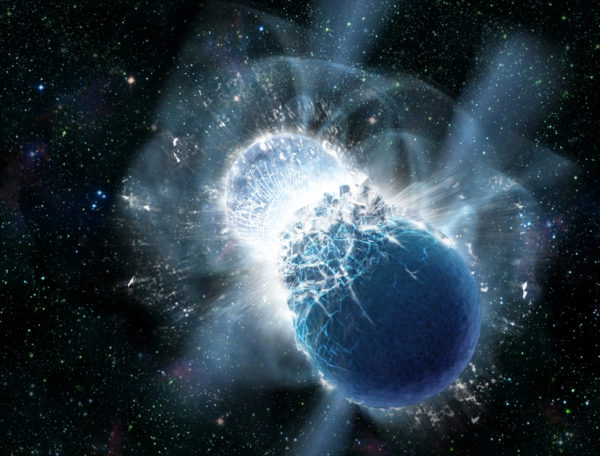 Two neutron stars colliding, which is the primary source of many of the heaviest periodic table elements in the Universe. About 3-5% of the mass gets expelled in such a collision; the rest becomes a single black hole. Image credit: Dana Berry, SkyWorks Digital, Inc.

But there ought to be a third way: through direct collapse. We haven’t seen enough supernovae for the stars that exist, and we don’t have a great explanation, otherwise, for super-early supermassive black holes. For the first time ever, we’ve witnessed a massive star simply wink out of existence. We may have just caught a direct collapse black hole red-handed. 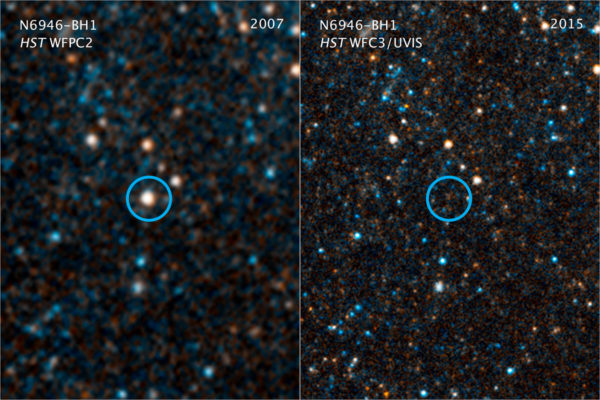 The visible/near-IR photos from Hubble show a massive star, about 25 times the mass of the Sun, that has winked out of existence, with no supernova or other explanation. Direct collapse is the only reasonable candidate explanation. Image credit: NASA/ESA/C. Kochanek (tOSU).

It’s almost too good to be true, but it means so much if it’s right. Come get the full story today!

From the article, direct collapse is described as very plausible. However, during the collapse of the gas cloud, there must be a phase where nuclear fusion ignites a star. Wouldn't the radiation and solar winds of this new star blow away or keep at a distance the rest of the gas cloud? What special properties should a black hole producing gas cloud have? Should it be very large or very dense or both at the same time?

If the hypothesized direct collapse also left a distinct gravity wave signature that current and/or planned instruments could record, that would provide additional, independent corroboration.

Ethan, has much theoretical work been done on this process. Assuming the observation holds up, at least some 20-100 Mass of the sun stars may follow this pathway. Then the question becomes, do the stars outermost layers, just fall into the hole, or does some of it end up in an accretion disk, and presumably some other matter was blown off beyond escape velocity either before or during the early stages of collapse. If we have some matter left, there ought to be something observable -post-collapse. Otherwise the star just vanishes.

you need either two massive objects orbiting one another very fast (you will get waves only as their acceleration changes), or one highly asymmetric object spinning extremely fast.

In fact, one of LIGO's search targets are the supernovae believed responsible for gamma-ray bursts, because the favored model of those involves a residual toroidal accretion disk which could have a sufficiently large quadrupole moment to emit GW.

“… the favored model of those involves a residual toroidal accretion disk which could have a sufficiently large quadrupole moment to emit GW.”

Are these direct collapse events plausible candidates for such an asymmetric collapse?

I fully admit that my understanding of a stars end days is limited, but from the scenario Ethan describes, there doesn't seem to be a stage where we would get scenarios like with supernovae. If a i.e. 5-6 Solar Masses star just implodes on itself into a BH... then there is nothing left (that alone is a scenario which I find hard to grasp... and I would have liked this post to be a bit more explained instead of it being in mostly mute monday)... But such a large star isn't spinning as fast as say a neutron star, and it doesn't seem to leave anything behind. So I just don't see anything that would generate a grav. wave.

But yes... it all depends on the actual mechanics of that implosion and if there is something asymmetric within it's last moments.

Sinisa, the red giant that vanished was supposed to be something like 25 Solar masses. I think it is assumed that the odds of direct collapse go up with mass. My guess is the rotation rate probably has to be pretty low, otherwise those parts of the star that start the collapse further from the center would probably end up as an accretion disk, and there would be a big signal -maybe even a full fledged gamma ray burst.

I had the impression that end-stage stars tend to have eruptions and strong stellar winds, so the BH is unlikely to start out in a vacuum. But if the ejected material has more than escape velocity it should escape the BH.