What will the death of the Milky Way look like? (Synopsis)

“Unless one says goodbye to what one loves, and unless one travels to completely new territories, one can expect merely a long wearing away of oneself and an eventual extinction.” -Jean Dubuffet

In the far future, all the galaxies within our Local Group will merge together, with enough gas and stellar material to form trillions upon trillions of new stars. But the amount of fuel is finite, and gravitational interactions are chaotic. At some point, the star forming material contained in our galaxy will come to an end, while more and more stars and stellar remnants are ejected from the galaxy. What will be left, at that point? 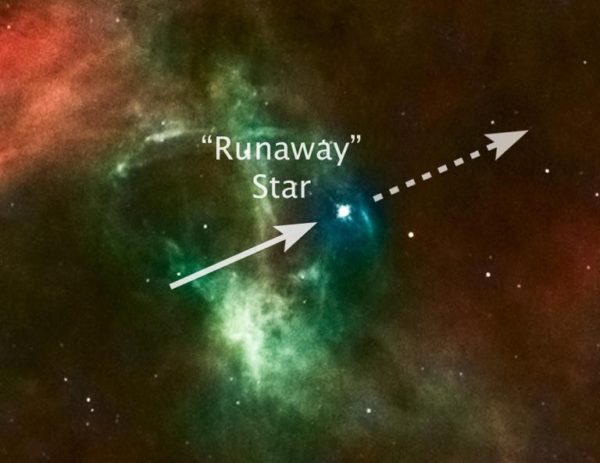 When a large number of gravitational interactions between star systems occur, one star can receive a large enough kick to be ejected from whatever structure it's a part of. We observe runaway stars in the Milky Way even today; once they're gone, they'll never return. Image credit: J. Walsh and Z. Levay, ESA/NASA.

Just a few stellar corpses orbiting in a halo of dark matter around a central, supermassive black hole. That mass will grow larger and larger, up until a certain point. Once it’s grown all it can, Hawking radiation will result in the decay of that central black hole, unbinding the last structures of normal matter. In the end, there will be nothing left but a large, massive clump of dark matter in the abyss of empty space. 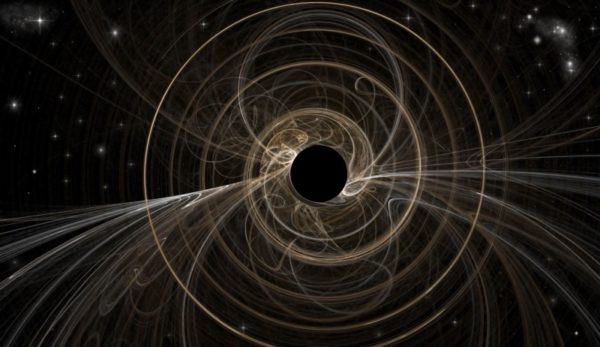 The simulated decay of a black hole not only results in the emission of radiation, but the decay of the central orbiting mass that keeps most objects stable. Image credit: the EU’s Communicate Science.

Need something to look forward to? How about the death of the Milky Way, and the return of the Universe to a cold, empty, unstructured state!

Wednesday:
""Nothing Escapes A Black Hole...."

Friday:
"Once it’s grown all it can, Hawking radiation will result in the decay of that central black hole, unbinding the last structures of normal matter."

The last reversal/ contradiction (from evaporating black holes to Friday's headline) took 10 days. The switch only took two days this time. The rate of change Ethan's opinion on black holes is accelerating!

"Hawking radiation is not produced at the black hole horizon."

A black hole does not "emit radiation." That happens far beyond the bh event horizon, not from within the inescapable gravity well. Hawking is still wrong and more science is proving it.

Black holes are the metaphysical phlogiston arguments of today. They reveal nothing except that there are too many physicists without useful work to do desperately trying to publish something.

This is a little bit off topic of Ethan's posting, but it does serve to illustrate what really goes on in scientific circles when actual scientists (unlike Ethan) are being honest about scientific theory: It often is uncertain, politically motivated, ideologically tribal, and not very transparent to the public, often with very managed reporting designed to give the false impression of consensus and certainty when in fact, there considerable disagreement.
.
http://physics.princeton.edu/~cosmo/sciam/
.
What's going on behind the curtain is always so much more interesting than what the PR wizards are blathering about.

The topic of this post HAS NOTHING to do with black holes or anything in relevance to what you're writing here.

Please refrain yourself from hijacking the thread and take your issues with the author elsewhere.

@Sinisa Lazarek #6,
Dear sir,
you are with all due accord cordially invited to clutch your pearls and bite me.
Please refrain from your sanctimonious preaching, this isn't a church and you aren't the minister of holy writ.
Have a nice day!
kisses.

@Sinisa Lazarek, #6:
"The topic of this post HAS NOTHING to do with black holes or anything in relevance to what you’re writing here."

From this post (Friday):
“Once it’s grown all it can, HAWKING RADIATION will result in THE DECAY OF THAT CENTRAL BLACK HOLE, unbinding the last structures of normal matter.” (My caps.)

@Sinisa Lazarek,
I can only take so much of your sanctimonious pomposity. There is no consistent black hole theory namely because no one has actually examined one internally, nor likely will ever be able to...nor determine if a theoretical non physical abstraction like a singularity is inside one, much less measure it even if it was (how do you measure the size of something of zero size?), and piling ever greater theoretical nonsense on top of the heap of unknowns does not clarify anything, quite the opposite. The math that generates a black hole was invented by David Hilbert and was dependent entirely on reified geometric abstractions that have no physical extension or ability to carry mass, much less in a non linear system (pseudo Riemannian nonsense) which means you can't just pile in additional masses to model interaction, like you can with Newton's linear gravity equations. This gives rise to ridiculous speculations based on literally nothing, as depending upon an infinite density of something without a volume at all has no calculable meaning in reality, no actual density calculation can performed on a zero volume, unless you somehow believe division by zero produces an infinity. On the math theory side of things, there is no known solution to the GR field equations for more than one mass in a given space time, so how the hell would you know (based on the actual equations) what its interactions would be with anything, much less with another black hole?
.
Claiming black holes somehow merge, grow, shrink, chirp like birds, or tap dance when you aren't even remotely sure if what you are calling black holes in observation (just about everything) are what a black hole is theoretically, it's all the same empty metaphysical speculation that goes nowhere except on to the next desperate paper to be published out of fear of perishing.
.
Just so you don't get your panties in a complete bind over my 'non professional opinion', you should be well aware that many others in the physics community (whom you apparently are ignoring) share it. Like Ethan, you put your fingers in your ears and pretend everyone is agreement with you in some mystical consensus of scientific certainty. It simply isn't so, and never has been.
.
" ... as far as the propositions of mathematics refer to reality, they are not certain; and as far as they are certain, they do not refer to reality."
-Albert Einstein
Geometry and Experience, Lecture before the Prussian Academy of Sciences, January 27, 1921