How quickly are the Pillars of Creation being destroyed? (Synopsis)

Are the beautiful and iconic Pillars of Creation, located deep within the Eagle Nebula, still around today? At a distant of 7,000 light years, the Pillars could have been destroyed at any point from about 5,000 B.C. to the present, and we’d have no way of knowing. When they were first imaged in 1995, many speculated that the nebula, containing new stars and many supernova candidates, may have already destroyed these dusty structures by now. 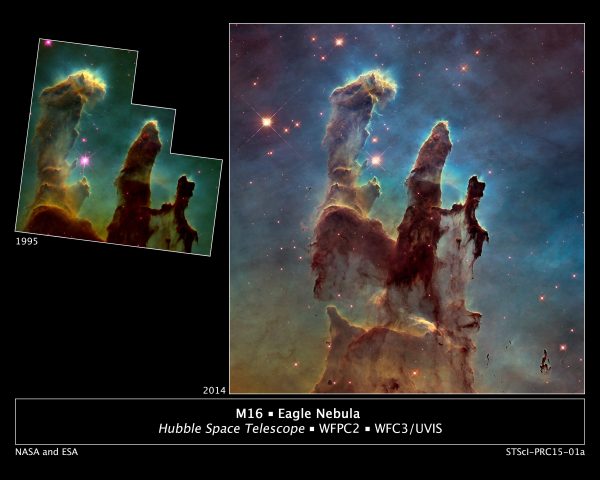 The 1995 and the 2015 versions, to accurate resolution scale, show off just how much more data is encoded in the more recent image. Image credit: NASA/ESA/Hubble Heritage Team (STScI/AURA)/J. Hester, P. Scowen (Arizona State U.).

In 2007, a study by the Spitzer Space Telescope showed off some hot, glowing dust, perhaps indicating a supernova that took place some 8000-9000 years ago. But the most recent data from Hubble, in both the visible and infrared combined, not only teaches us that the supernova was an unlikely explanation for the dust, but allowed us to measure the true rate of evaporation of the Pillars themselves.

By rotating and stretching these two images relative to one another, the changes from 1995 to 2015 can be overlaid. Contrary to the expectations of many, the evaporative process is slow and small. Image credit: WFC3: NASA, ESA/Hubble and the Hubble Heritage Team WFPC2: NASA, ESA/Hubble, STScI, J. Hester and P. Scowen (Arizona State University).

It looks like they’re not only still here today, but will likely be around for 100,000 years or more! Come find out the latest on the Pillars of Creation on today’s Mostly Mute Monday.

I blame Trump for this callous destruction of our galactic environment.